Forget all that and focus on this: Ronaldo has won this award many times, Two of them in a row the last Two seasons, yet he can't find it in his heart not to disrespect his former teammate and friend, who by the way was a major contributor to all his BdO wins? You've got to be a special kind of hateful and selfish to act this way and let your agent and family question Modric's win.

As of now, I'm rooting for Modric to win the BdO. It would be hilarious To see Ronaldo's grandma and gardener join the fold as well.

@Casciavit wrote:So Mendes, Marotta, and CR's sister have all come out and practically called Modric's win a farce lmao. If they're crying this much over UPOTY imagine if he doesn't win the Ballon d'or...

It's understandable. Ronaldo is in his last goat status stages. he is old. will not win as much as he did with Madrid. So as far as having a chance to win individual awards, this year maybe his last year. and he lost the first one. It is very hard for him to accept that.

So many people still have no idea how selfish Ronaldo is.

"It was his personal decision, it is to be respected. All I will say is he had a great season last year. He was angry yesterday because he won the Champions League scoring 15 goals. This shows that he always wants to be the best."

Whats new and what did ppl think CR would have any class at all?

Im surprised ppl so slow to catch on, hes been like this ALWAYS.

Gotta say Im surprised by Modric actually winning, the votes are fair this time, instead of just popularity contest, Modric deserves it more, and as a lot of us discussed, Modric has been vital for Real in the past few years, alongside Ronaldo, and together with the WC this year, he just beats CR. Congrats! 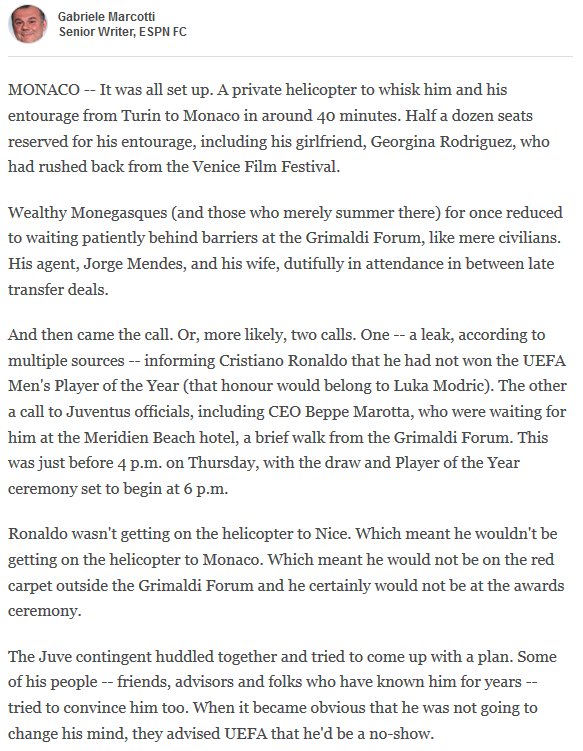 Cristiano Ronaldo is the Most selfish and absolute Self Centric player i have ever seen. It is always about him, he never gives shit about any club, if the club he is playing for does't supply his demand or lobby for his personal award he just start crying. Never i have seen any player in any sports thats is so crazy about personal award.
As talented as he is i never liked him nor enjoyed him because of his unbelievable selfishness. shame of a player. I don't know why lots of Madrid fans held him as high. He does't care about Madrid. it was all about him winning balon d'or.
Despite rival i always liked and enjoyed Zidane and preferred over others  barca player. it is sad he played for  Madrid .He was true legend.
Raul, Cassilas, Roberto carlos, R9, even hell Figo was waay better person and enjoyable than this guy.
I know lots of you will say oh look who are talking you are jealous because be is better than Messi etc.. But him better than messi or not. I just write what i feel about him. Absolutely can't stand this type of player.
Hope barca never get this type of player who think he is bigger than club and its all about him.

And Modrić should win Ballon d'Or  pretty easily, if there is any justice. One of the best player in the world. Own three UCl, MVP of the world cup. what he should do more as a midfielder?

I think most if not all Madridistas acknowledge that Ronaldo may have been arguably the best player in our history. As a person he's everything you described. Which is probably why Perez was so quick to accept the offer Mendes had put forward instead of pointing to the release clause and working it out with him.

Perez went out of his way to making him feel loved and still Ronaldo held a grudge. He's talked smack about his teammates multiple times but I suppose it was easier to let it go for us because he wasn't the most powerful person in the dressing room and the one that was didn't lose the opportunity to clapp back almost immediately after.

It must be a shock for him to know there are 10 other players in the line up and all arguable top 2 in their position. Modric absolutely deserves to win WPOTY. And it's a popularity contest, Ronaldo will sure lose votes with his entourage's latest outburst.

And he should probably understand that it has been a two way street, not only has he benefited from his teammates but also the club that has provided a platform for him to further his fame and collect the personal trophies.

I think Kroos said it best when he switched to RM from Bayern. You get more appreciated and recognised if you play for RM/Barca than if you play for other clubs. It wouldn't surprise me at all if Modric won Balon d'or not because he deserves it just as much as Ronaldo but because he'll have Perez' hype machine behind him

I can't even lie to myself because I'm a Madrid fan. This is farce... CR should have won it. Only reason he didn't is because the hype machine called Real Madrid and it's very real.

Reason why i've disliked CR forever and only respected him as a player the past 2 years...  the guy is the biggest *bleep* in a sport known for *bleep*.

His play made his antics tolerable. As his play drops (and it already did the past 2 seasons despite the stats), the attitude will become less and less tolerable.

Thank god the bitch is gone.

@guest7 wrote:I can't even lie to myself because I'm a Madrid fan. This is farce... CR should have won it. Only reason he didn't is because the hype machine called Real Madrid and it's very real.

Now you know how football fans feel when Fakenaldo was gifted 4 Ballon d'Or's because Madrid hype machine.
_________________
- Come with me. Save yourself. You don't owe Argentine people any more. You've given them everything.
- Not everything. Not yet.

I actually like Fakenaldo, nothing wrong with his personality, he's just deluded that's all. What I despise is people who stole football from the fans, and made it this weird fake shit with his fake personal accolades.

@guest7 wrote:I can't even lie to myself because I'm a Madrid fan. This is farce... CR should have won it. Only reason he didn't is because the hype machine called Real Madrid and it's very real.

I don't disagree... But I haven't always paid attention to these awards, but it has always been given to the one with the best season and not the best player... Or am I wrong?

Messi is unique though, he has always had good seasons + been the GOAT. But it's funny to see Harmonica blame anything other than corruption for once

Also I think this was down to making both Barca and Real Madrid fans happy.

CR is no longer a Madrid player and Barca fans just hate CR for stealing so many Balon d'Ors from Messi. It just works for both clubs if Modric wins, since he is a likeable guy.

Well tbh, Modric was better player than Fakenaldo in CL last season, on top of winning "bad" Golden Ball. So perhaps the accolades are again given to those who deserve it. When Messi won "one of the best ever" Golden Balls, they gave Ballon d'Or to Fakenaldo for playing like absolute garbage.

Lets see if Ballon d'Or is finally again given to one who plays the game in whole different level than others.
_________________
- Come with me. Save yourself. You don't owe Argentine people any more. You've given them everything.
- Not everything. Not yet.

How he is playing atm definitely doesn't deserve Balon d'Or

Ronaldo doesn't deserve it cuz he is a rapist

Just give it to Messi

Today at 1:34 am by Robespierre

Yesterday at 8:11 pm by Hapless_Hans

Yesterday at 6:36 pm by Hapless_Hans

Yesterday at 5:27 pm by Nishankly

Yesterday at 4:04 pm by Arquitecto

Yesterday at 8:35 am by iftikhar

Yesterday at 1:27 am by Great Leader Sprucenuce

Yesterday at 1:19 am by Great Leader Sprucenuce