It's getting closer, we have been waiting too long.

Would be great if we beat Spurs at their home but it seems to much for this team atm. Let's see as long as we do defensively fine it's all right.

@Nishankly wrote:Would be great if we beat Spurs at their home but it seems to much for this team atm. Let's see as long as we do defensively fine it's all right.

Alli and Lloris both unavailable against Liverpool. Son also played 8 games in 26 days so he probably can't start either. Alli has been impressive this season and he is their big game player so we are fortunate with these, also they will have Vorm at GK. I am afraid of Wanyama though because he is getting back in their team after injury and they will now have Winks too and Lamela. They still have a lot of options.

Also, PSG will play without Verratti and Buffon, but Areola is IMO better than Buffon and Tuchel said Areola is the 1st GK anyway, Areola is better than Lloris too IMO and should be starting for France, which he is now. Kurzawa will also miss the Liverpool game which is bad because he is shit, but I don't know how good is his replacement Bernat either nowadays, he was always shit defensively.

Can you imagine PSG starting Marquinhos-Rabiot midfield at Anfield?

Or a Lassana Diarra-Rabiot midfield?

If we have to win this match, we have to be clinical. Last few games, we could not finish some easy chances and we left that a bit of hope in the other team.

But i guess this will be a first big test for all our defensive hype that we have had till now. And a brilliant preparation game to face PSG. Somehow I want Spurs to create chances, play nice attacking football so our defence gets tested for real. I want to see if Alisson and VanDjik-Gomez are really that good

I would prefer a bit more solidity for this game:

Seems like Rabiot also won't play against us next week. Alves also gonna miss the game, but they have Meunier.

What midfield are they gonna field at Anfield , Marquinhos-Lassana Diarra? damn

@iftikhar wrote:I would prefer a bit more solidity for this game:

I would also hope for this team man (except maybe Hendo for Keita) , but we already know Klopp is gonna start TAA over Clyne and won't start Fabinho. I saw an article that said Fabinho will be on the bench tomorrow.

Very unimpressive and scrappy win. But who is going to complain if it wins the league???

But seriously; Mane, Salah and Bobby needs to find the rhythm and soon.

Tbh I think we played ok today, certainly better than last games, we could have easily scored at least 3 more goals if we weren't so wasteful. But I gotta say Tottenham was really bad today and made it easier for us. We weren't near our best and it could've finished 5-1

I like how Firmino played today, he was great imo

"I once tweeted that I didn’t really know what @JamesMilner was on the football pitch. I do these days, and owe him an apology. He’s a terrific, versatile and intelligent footballer. My bad." - Gary Lineker

What a great win.

I agree. But I gotta say Mane and Salah were both a bit greedy today, they could've passed to eachother on multiple occasions and we would have finished the game a lot earlier. Firmino was the only one playing for the team and not being selfish today, and he still got a goal, great display by him. Psg is next, damn it's gonna be an interesting match.

PSG will be a difficult game and I guess Klopp needs to rotate a bit in midfield and front 3. He needs to develop a bit of different tactic than Firmino as always 'false 9' because 'yesterday's possible injury incidence' was a good reminder that we need to be ready for all future situations.

The reason why i'm genuinely optimistic about Alisson is this.
Just after that howler, he got this ball here. Didn't panic. Saw a close gap but a clear pass. Didn't hesitate to give it to Milner in space. Other keepers in that position would likely to shoot it long than passing pic.twitter.com/FO0bMfP5CB

Yeah that was great calmness by Alisson especially because the crowd was also putting pressure on him to make another mistake and he stayed cold as ice on every next situation.

I think he learned from his mistake, in the game vs Spurs he played good passes when he had space for it but when there was danger in losing the ball and Spurs players rushing at him he always kicked it long fast enough, didn't even think about dribbling, which was good to see. 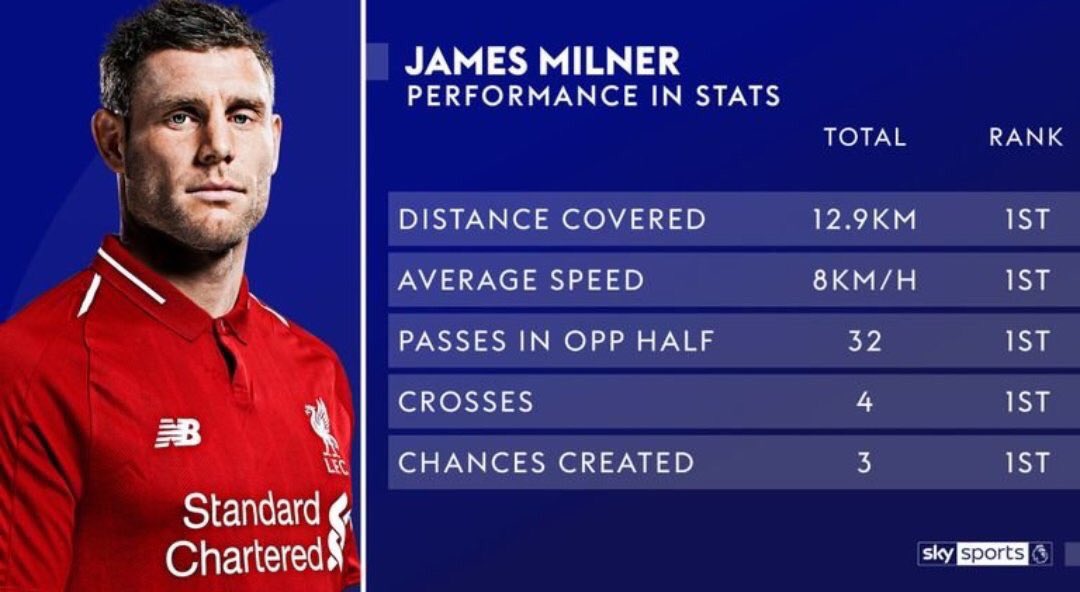 Milner stats vs Spurs. For me our best player in the first 5 games.

Firmino 50-50 for tomorrow's game. Sturridge only other striker fit and available.

We were 2-0 up in all these situations. Our forwards either took the wrong choices or became selfish. Klopp got furious and he was right to be as we had some good chances to seal the game. Players need to focus on win more than scoring. pic.twitter.com/ljNDxcBvXT

Klopp will work on it, I didn't see this a lot last season and I'm not worried about it yet since it's one game that we didn't drop points and we have always been wasteful. Scoring so many goals individually can certainly get into their heads though.

@Nishankly wrote:Firmino 50-50 for tomorrow's game. Sturridge only other striker fit and available.

We don't do striker, so that's hardly an issue. I guess Shaqiri will fill-in if Boby doesn't make it.

@Nishankly wrote:Firmino 50-50 for tomorrow's game. Sturridge only other striker fit and available.

We don't do striker, so that's hardly an issue. I guess Shaqiri will fill-in if Boby doesn't make it.

I was thinking the same thing about Shaqiri,might be possible. If Firmino can't play, it will be interesting to see who gets to play, but it's most certainly either Sturridge or Shaqiri. But playing without Firmino in this game would be really bad news, he is so important in our system.

I haven't been so excited from a long long time . Looking forward to how we tear a new one or get torn apart but most important is we give our all for it.

TiA wrote:There is, thankfully, no serious damage and Klopp was hopeful that the Brazilian would be able to play—though that now seems unlikely.

I think it's good in a way. People need to step-up; Klopp needs to be innovative in strategy while players (Sturridge/Shaqiri) needs to make themselves felt.

I guess it will be simple swap between Bobby and Shaqiri. However, may be it's a good opportunity to play 4321: