Is it because he benched Gasol for the fourth q yesterday?

It turns out they did rook him

Luca wrote:Is it because he benched Gasol for the fourth q yesterday?

Reports seem to indicate he and Gasol had a Butler/Hoiberg relationship.

If that's the case it makes sense but I heard nothing about it before today.

Then boom, come onto GL and see this

Yeah I think most franchises would chose the coach over the player unless they were absolutely exceptional.

I love Gasol but it's not like they are going anywhere fast regardless tbh.

Grizzlies aren't exactly lighting it up either

Teams like the Clippers, the Grizzlies and probably the Jazz should be looking for a trade

He's a decent coach. Get him Bucks.

Ballsy move though. I assume there is more to it than just the 4th quarter fiasco

Ballsy move though. I assume there is more to it than just the 4th quarter fiasco

Oh man, didn't know it was that bad

I feel like their team isn't really that good so I would have otherwise said he's on thin ice but it's premature...but Gasol was probably the break in the thin ice.

If the Cavs lost a couple more games in that little stretch, Lue would've been out by now surely. Instead they just lost D. Rose

Harden with 20/4/5 after the first quarter

Sixers vs. Cavs is heating up

No wonder... Luke Walton of course has to start Nance... Only way our offense could get worse.

Freeza wrote:No wonder... Luke Walton of course has to start Nance... Only way our offense could get worse.

At least KCP turned red hot. 16 points. Team scored 28 in the last 6 minutes or something.

I think they need to remove the block/charge rule completely tbh. It results in too many injuries and the play would improve. 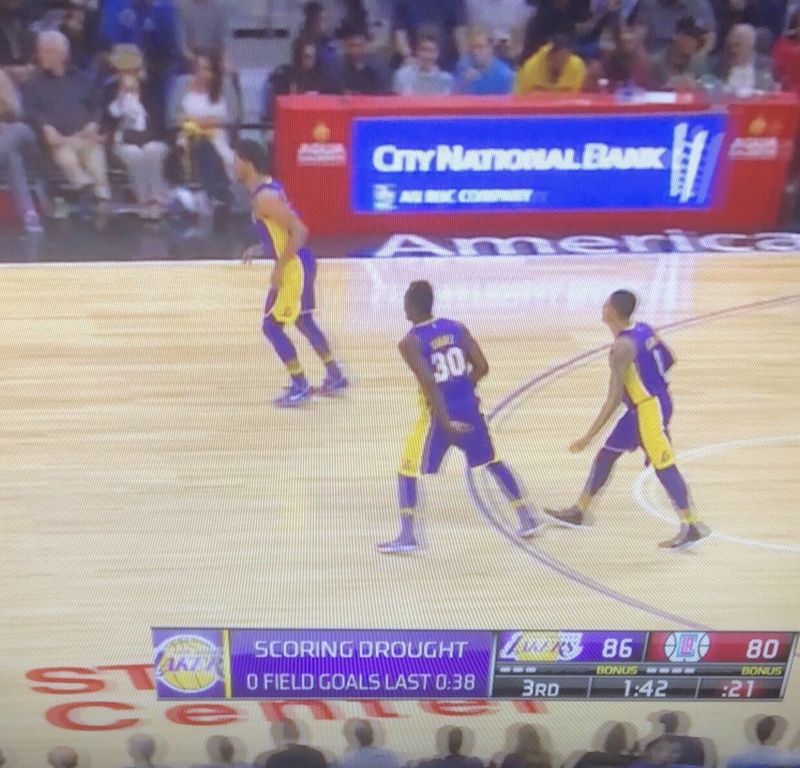 This info graphic coming on after we scored FTs

Another loss on Luke Walton

If the Cavs lost a couple more games in that little stretch, Lue would've been out by now surely. Instead they just lost D. Rose

I think the media is starting to notice tbh, but Bucks had a 1-10 stretch last season and he lasted through that. If he's on a tight leash now, it can't be predicted by past actions by the FO. With that being said, they've got Bledsoe now and Giannis has become a bonafide superstar.

Kidd has benefited from Milwaukee being a smaller market and thus avoiding national attention beyond being the "coach who was an all star legendary point guard, so he must be a good coach". I think the Bucks have started to creep into more limelight due to Giannis though and that doesn't bode well for Kidd. People are picking up on the fact that Bucks are letting opponents shoot 45%+ on 3 pointers lmao

I do think if Bucks don't pick it up soon he's gone. Although he should be gone even if results pick up. It's more than clear to me he just isn't good enough. Bucks beating teams they should beat doesn't change that.

I'd take Luke Walton at this juncture tbh

Can't wait for the day that Freeza accepts Lakers are actually trash and it's not all Luke Walton's fault tbh.

Gonna be a great day.

I think Luke is a good coach tbh

Great Leader Sprucenuce wrote:Can't wait for the day that Freeza accepts Lakers are actually trash and it's not all Luke Walton's fault tbh.

Gonna be a great day.

Is non-retarded rotations too much to ask though? Playing Kuzma as a starter for two weeks and he does everything right. Then Nance comes back and goes straight into the starting five again and Kuzma gets 18 minutes playing time. Scored 15 points on 5 for 7.

Randle and Kuzma has been our best players and Luke is so reluctant to play them. Meanwhile Corrie Brewer gets all the minutes he can handle.

Industry sources tell me that the Raptors are open to moving center Jonas Valanciunas and have young players the Griz might be interested in pursuing, including Jakob Poeltl and Lucas Nogueira. Gasol would be a marked upgrade for a "now" team that needs to get to a finals with core stars DeMar DeRozan and Kyle Lowry.

Don't think it will happen. Also, I'm not sure how much better that even makes us, obviously Gasol > JV and its not close but if we gut our bench, which has just been so good and give up picks.... it still won't put us over the Cavs, but its interesting nonetheless

Saw it on another forum, obviously a rumour but I thought it was worth discussing. We've been in for these type of trades but I don't think Gasol will be a Raptor anyways