Bonaventura will undergo few medical tests tomorrow to stand on the extent of his injury. He could possibly miss the upcoming 3 games [Sky]. pic.twitter.com/MVNwKjM7I7

Biglia out for a month as well

We face Crotone on Sunday

Really unfortunate with Biglia , couldn't wait for him to boss around. Still very much happy with Locatelli though , so it's fine really .

Really hoping it's just a minor thing with Jack , come on now

Never make any predictions for the opening fixture , usually it tells me half the truth of the season . So i'll wait , nevertheless i am very confident we will do well

Bona shouldn't have a serious injury, but we need 3-4 new signings I think for depth reasons. We have released many so far recently. Locatelli has shown flashes, but we need more players. Draxler would be nice.

The starting XI of Milan the last time they played Crotone away (April 30, 2017) and the probable XI for tonight. [Gazzetta dello Sport] pic.twitter.com/XnU1Vh7yrT

He will probably be eased into things . He's 21 and comes from Portoguese league. Not worried about it , he'll play later anyway

not sure what to expect from Cutrone start though , but here's hoping . He's shown promise so far , time to get a taste of where it's at.

Silva will play the second EL leg against that farm team. Maybe he will score again.

But looking at that formation from April. Zapata, Paletta, Vanigoni, and Mati... Lol. Wow what an awful formation that was.

I'm loving what I see in this match... damn Milan... lots of passion and Suso is on fire. Yeah, they did get one player expelled...

VAR makes everything more fair... lets see how long I'm a fan of it. But our defenders seem to only engage in professional fouls. VAR would send off Paletta every single game.

Milan is ripping it up, and Cutrone is awesome.

Excellent start in the game and excellent start to the season. Many things to be said , i'll save it for later though. May be just Crotone and we made them play the entire game with 10 players , nevertheless i am pleased from what i saw . Happy with Cutrone as well , very positive debut.

Great start, even though we were playing against 10. i saw some great glimpses. Cutrone is great. Silva should've had a goal, Hakan needs to do better.

I thought Calhanoglu did quite well. It is Locatelli that needs to improve a tad. But overall good performance.

Remember last season we drew 1-1 with them if I recall (or did they win 2-1?). Though they were in a battle to avoid relegation.

It seems an absolute waste getting Kalinic now, if we are going for a 4-3-3. Cutrone and Silva re more than enough, i get thaat getting an experienced guy is beneficial, but it seems surplus to requirements.

And we we cannot have Suso/Bonaventura be our only wingers with Borini rotating them, no sir. Absolute madness.

We need a midfielder and a winger ASAP

Well I'd still like that world class striker, but if that is absolutely impossible, then we should just spend more on another midfielder and winger. I say go all in for Draxler. Maybe I'm in dream land with that one. And I hear they want to spend big on a midfielder apparently. The money on Kalinic can be better spent elsewhere. But I still want Aubameyang! Maybe it's too late for that. IF it is, Two mids + Winger for me. 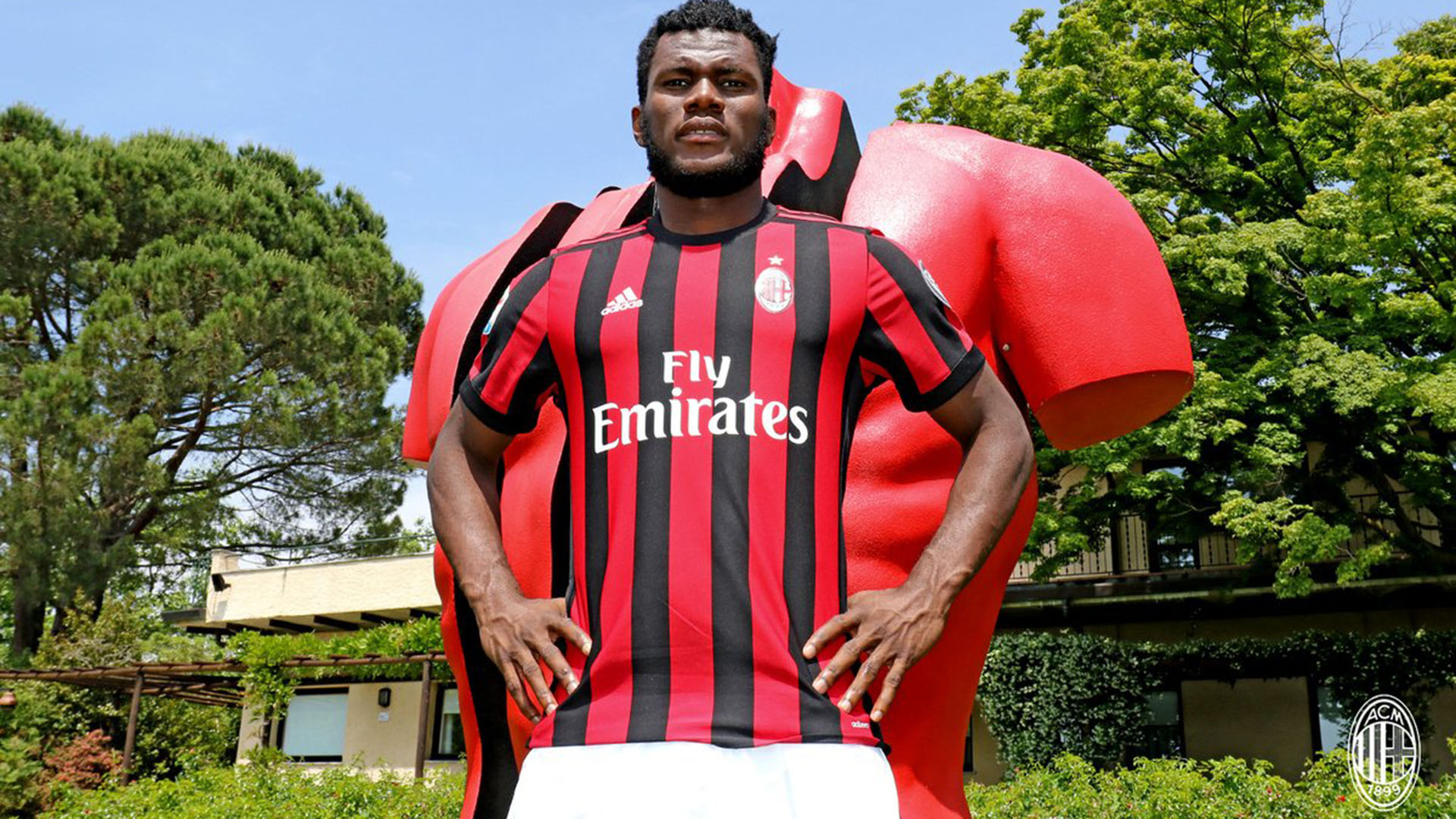 ES wrote:It seems an absolute waste getting Kalinic now, if we are going for a 4-3-3. Cutrone and Silva re more than enough, i get thaat getting an experienced guy is beneficial, but it seems surplus to requirements.

And we we cannot have Suso/Bonaventura be our only wingers with Borini rotating them, no sir. Absolute madness.

We need a midfielder and a winger ASAP

You are actually saying we should see out an entire season of 3 competitions with just Andre Silva and Cutrone ?
More than enough ? 2 young players with not one full season in Serie A to deliver us into the CL places , this is more than enough ?

I liked Cutrone last night and he delivered , Crotone and what not he rekt them , that said let's not get ahead of ourselves just because you don't like a player. We were always getting at least one CF of certain experience , 4-3-3 and what not . Cutrone didn't change that , either by scoring or staying. And neither Kalinic arrival excludes the big CF signing , if it's possible it will happen and we will play with 2 up front , if it's not , we go on as we are with 4-3-3 as plan A . Either case Kalinic wasn't signed for fun ; he is anything but surplus to requirements.

As for a winger signing , i believe it will clear things up and reveal how we continue . If we do get a winger and a CM maybe , then 4-3-3 plan A it is. If we do get the big signing CF and maybe a CM , then 2 up front it is . Whatever it's going to be ,

both are proper planning for the season ahead . You may not approve of Kalinic and this i can understand , but Kalinic was never surplus to requirements in any scenario . He wasn't an impulsive or a panic buy , he was planned since the beginning of the summer almost. I get that you don't like him but at least try to be clear about it and shit talk him properly

, don't seriously claim Andre Silva and Cutrone would ever see us through 3 competitions and succeed with our goals , come on now

And you are saying we need to start Kalinic now, when you were saying before he wouldn't be a starter? Him starting would be bad news for this team. I can shit talk a shit striker properly. He missed something like 40 chances in the last year and went missing the second half of last season.

Oh and he is nearly 30 so that means he will decline soon and lose most of his resale value. And decline from what? His current mediocrity?

If he is the only striker that is coming, we are screwed. He doesn't do anything particularly well and he doesn't provide assists to his teammates (less than Bacca). All that yapping about hold up play means nothing.

I never claimed i didnt like Kalinic, just a surplus to requirements, 3 players for position? Whel we have 2 wingers only? Thats a serious personnel issue, time willtell how we're gonna proceed. But if we persist with 4-3-3, i have a bad feeling

Oh and his buy has panic written all over it. Looks like we are screwed as he is all that is coming. He is a disappointing frustrating player... Just as Viola fans. Fiorentina is running to the bank now.

its not a panic...the were waiting for bacca to leave...he is the replacement

He is accepting mediocrity. But after so many years of this type of crap by Galliani made some of us used to it.

All the favorites (plus Inter) won their first games. This will be one bad-ass Scudetto race.

I am still extremely cautious about our chances, as our depth and a truckload of new players will work against us. But 3 points are 3 points and let's be happy till next week.

Milan is now only three signings away from being a challenger on paper; what happens in the field is another matter. I won't discuss transfers here as there is a separate thread for that, but concerning our position in relation with the rivals, it's all too obvious we are short on workforce. A huge number of loan opportunities will present themselves by Sep. 1, and we can easily bag even more than three players for free. I am not worried about that. I just want us to have all the ingredients ready so as not to leave Montella a single excuse transfer-wise.

ES wrote:I never claimed i didnt like Kalinic, just a surplus to requirements, 3 players for position? Whel we have 2 wingers only? Thats a serious personnel issue, time willtell how we're gonna proceed. But if we persist with 4-3-3, i have a bad feeling

my bad then but in my defence when you say he's not needed because we have a 19 year old and 21 year old with not a full Serie A season in them then you can see how i came to this conclusion .

I sincerely don't see what's the problem having 3 CFs in 3 competitions , especially when 2 of them , no matter how talented , are still inexperienced and nowhere near complete players. We're protecting them with Kalinic , if anything. In any case , even if we see this just on paper , Kalinic Serie A , Andre Silva EL and Cutrone cup and maybe Crotone's of the other 2 comps , that's still very nice . I don't see the slightest issue here but whatever

As for the mercato yeah , in theory everything's open still , 4-3-3 , Kalinic and what not , we haven't said our last word just yet. Besides if we just buy one or two midfielders , we can move Hakan and Bona on the left , and leave Borini to be Suso's back up . Could also work .

Or we could get 1 midfielder and just sign a main winger with either Hakan or Bona filling in for him when they must , Borini still gets to be Suso's back up , meaning Suso is going to play a lot meaning it's ok . Not great , but ok . And maybe things turn out totally different down the road and we scrap wingers and 4-3-3 all together , let's see how it goes down first.

If we got Auba/Belotti , only one of them would be considered a regular up front . Andre Silva and Kalinic would always fight for the position next to that player , so no they wouldn't be considered 'starters' . Maybe early on Kalinic would start more games just because of experience . Later on no , it would be open .

And i don't see any of Auba or Belotti around and the possibility of going with 4-3-3 is very real , either plan A or B and what not , so Kalinic will start most games in front of Andre Silva and Cutrone. That's why he was bought , because he is more reliable for the season ahead. And in this way , both Andre Silva and Cutrone can develop safely and steadily.

In any case , let us see what happens in the final days of the mercato. I am very happy and excited no matter what , we're going to have a good team once again.

We aren't getting anymore strikers. So we are stuck with a misfiring hack. Serie A experience lol? This is like a Galliani era argument. Reliable? Missing 40 chances in one year is reliable? He has one of the worst conversion rates. Nothing reliable a mediocre 29 year old striker. Milan is higher pressure than Fiorentina so he could easily flop.

Welcome misfiring Kalimatri... Will be great seeing him hit five goals for us this season.

Not. Alpha what? Usually you assign that label to one who has confidence.

kalinic will be our mandzukic! at least thats the hope!

I think he is more like Matri and Oliveira.

Page 1 of 6
Permissions in this forum:
You cannot reply to topics in this forum
Latest topics
» Pep Guardiola's adventures in Manchester City

Today at 4:04 am by LeBéninois

Today at 2:51 am by Great Leader Sprucenuce

Yesterday at 9:08 pm by BarrileteCosmico

Yesterday at 8:15 pm by Robespierre

Yesterday at 5:35 pm by Arquitecto