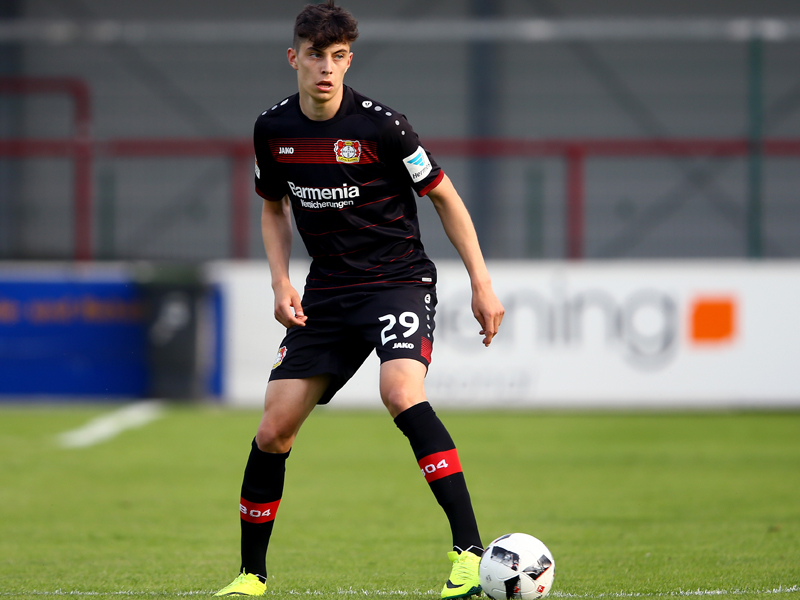 After the CAS' shock decision to ban Calhanoglu for the rest of the season, Leverkusen coach Schmidt, who has been under heavy pressure himself with multiple press reports alleging his imminent sacking, made the bold move to promote 17-year old attacking midfielder Kai Havertz to starting playmaker. It has paid off.

I'd first properly seen Havertz when he started against us last fall, which was his second Bundesliga start, and only the fifth BuLi appearance of his career. He played surprisingly well and mature for a 17 year old. The Aachen-born teenager has been with Leverkusen since the age of 11, he's also been a Germany youth International for a couple of years.

Since stepping up in Calhanoglu's absence, Havertz delivered two MOTM performances in a row, with 2 assists in the 3:1 win at Augsburg yesterday, and one assist vs Frankfurt last week.

He's tall, physically strong, technically immensely accomplished, fast, can play on the wing and in attacking midfield, and most of all very mature on the pitch.

Let's see how he does from here.

He looks like Goretzka. What has happened to Leon BTW, haven't heard anything about him in years

Stopped being the new Ballack the moment he joined Schalke

Bayer have an awesome attack if Havertz is as good as form suggests.

Just need Volland to come good and replace the scrub that is Bellarabi.

Stopped being the new Ballack the moment he joined Schalke

Bayer have an awesome attack if Havertz is as good as form suggests.

Just need Volland to come good and replace the scrub that is Bellarabi.

He had injury trouble, including a long term muscle injury, in recent seasons but has steadied himself and he's a regular starter for Schalke now.
However, he has moved deeper and is now mainly playing as a central midfielder.
He is doing well if not spectacularly. He's still only 22. As urban alludes to, Schalke is somewhat of the place where dreams go to die.
Good for youngsters, bad for youngster who want to make the step to top player. He'll blossom when he moves.

Bayer 04 Leverkusen wrote:Bayer 04 have agreed a long-term deal with top talent Kai Havertz. The 18- year-old, winner of the U17 German championship with Leverkusen last season, has signed a five-year contract with the Werkself. His appearance on matchday ten in the 2016/17 season against Darmstadt 98 makes Havertz the youngest player to start a game in the history of Bayer 04.

Wonder if he will go to Bayern before Werner

If Bayer had a good manager for once, they'd be an interesting team to follow in the near future.

maybe Herrlich turns out to be one

hard to imagine but possible

Herrlich has not turned out to be a good manager, but rather a shitty one.

Kid is going to be a huge star.

Great pick up on FM. Must buy.

Honestly though, I think it’s pretty clear this kid has a great future ahead as long as he can stay fit.

@Hapless_Hans wrote:Herrlich has not turned out to be a good manager, but rather a shitty one.

Kid is going to be a huge star.

The only of the recent bout of kids actually and really delivering now, besides Kimmich.

With Meyer, Goretzka, Weigl, Brandt, Gnabry etc all having their respective problems, Havertz is going strong AF.
Though to be fair to Brandt, he's not in bad form, he's probably just not heading in the direction of being a world beater.

- 17 goals in the league this season, 20 in all competitions.

- 9 of those were for the 1:0, the most opening goals of any BuLi player

Needs to leave Bayer ASAP, that club is cursed.
Already starting for Germany, Germany have never won anything with a Leverkusen player in the squad. Leave your club, do it for your country, Kai!

I will predict that at some point in the future, Kai Havertz will become the first German player since Sammer to win the Ballon d'Or, and the first since Lothar Matthäus to be named World Footballer of the Year.

Hans: *insert random bundesliga player name* will be the next balon dor winner

Pretty sure this is the first time Hans has ever done that.

And to be fair, Havertz is not some random Bundesliga player. Totally possible, unless Mbappe just wins it every year in the future ala Ronaldo/Messi

I think what would be worse for Hans than seeing Zidane win another CL with Madrid is seeing Madrid sign this excellent young footballer with Zidane at the helm winning another CL.

The fact that Liverpool have refrained from signing an attacker this summer makes me fucking nervous and paranoid, quite honestly

Except I'm sure that's exactly what these fuckers have been doing

we can't fucking let this slip

Need Liverpool to have a horrendous season for that alone, so that they don't seem so attractive next summer

Page 1 of 5
Permissions in this forum:
You cannot reply to topics in this forum
Latest topics
» 2020/21 Premier League Discussion

Today at 8:27 pm by BarrileteCosmico