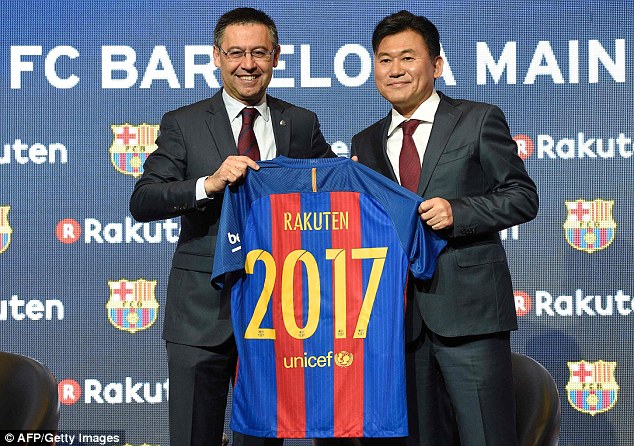 Barcelona have signed a huge new sponsorship deal with Japanese firm Rakuten worth £200million.The four-year agreement, with an option of a one-year extension, which will see the Rakuten logo feature on Barcelona's shirts from next season, enters the Catalan club into a tier of shirt-sponsor revenue matched only by Manchester United.

The partnership is understood to be worth up to £53m per season, with £5m of that figure dependent on bonuses linked to success on the pitch.

Rakuten's deal follows a recent trend of only covering the sponsorship of the first-team shirts. A separate deal for Barca's training kits is still to be negotiated and could be targeted by Qatar Airways - who are expected to stay on as the club's official airline partner.

It's double than what Qatar deal yields so yeah it's definitely better, now we can finally afford them Valencia and Sevilla scrubs.

Finnally a deal that it's on our deserved price and not with Qatar.

Yesterday at 4:48 pm by Harmonica

Yesterday at 7:23 am by The Demon of Carthage

Yesterday at 4:33 am by alexjanosik