I'd call his cuts from Arts, health care, education etc. treason. It's condemning the less fortunate and a much bigger problem than the other problems.

He has gone against everything he's said during his campaign, like most of us knew he would. But it isn't fair for his entire base of voters who'll suffer more than anyone with these new budgetary cuts.

I was also disgusted by Hillary and her whole thing with the investigation btw.

A president, and specially the president of the most powerful country in the world, needs to be better than you and I.

Nishankly said it perfectly. If you want a president of a certain ideology then go ahead and find a person that has those ideas while being competent, ready for the position, and not under *bleep* investigation by the FBI (like Hillary was as well).

I grew up under a transition between democracy to dictatorship. It has made me have zero tolerance for this bullshit. No one should be above the law, and an election should not be a get-out-of-jail-free card to be used every time a politician feels like breaking the law.

Freeza wrote:I'd call his cuts from Arts, health care, education etc. treason. It's condemning the less fortunate and a much bigger problem than the other problems.

He has gone against everything he's said during his campaign, like most of us knew he would. But it isn't fair for his entire base of voters who'll suffer more than anyone with these new budgetary cuts.

But let's be careful about words. His budget proposals are 'treason'?
Traitor of the people? So the punishment is death penalty? Who is going to enforce it? On basis of what law-enforcement powers?
Should the FBI arrest him and put him on the electric chair? Should he be abducted to a black site by a NSA/CIA special joint task force to ensure Keynesian economics, where he can be assasinated?

Or should the artists, teachers, farmers, and park rangers unite, rise up with pitch forks and string him up on a cherry tree in Washington?
That last part would be a proper revolution, a thought that of course isn't actionable anymore what with today's highly militarized state law-enforcement.

I guess you're using the word figuratively. But it's a nasty word that has been used by centuries worth of autocrats to kill and jail political opponents.

I'm actually serious about this. The end does not justify the means.

I'm using treason as abusing the trust of his nation's people. You're probably talking about high treason then I'd assume.

Freeza wrote:I'm using treason as abusing the trust of his nation's people. You're probably talking about high treason then I'd assume.

That's the sense it was used in in the tweet about the FBI investigation, and in our discussion here and by @rincon, yes.

Don't get me wrong, I understand what you're saying and I agree.
But of course that means that to varying degrees, almost all elected politicians have been committing treason all the time

the bush family were friends with the bin Laden's and no one bats a eye lid. someone from trumps party speaks to a Russian and the world falls apart.

rincon wrote:Dude what do you mean no one bats an eye. EVERYONE bats an eye. Bush faced unreal backlash and controversy.

on 9/11 the only plane in America allowed to fly was the bin laden jet. Osama bin laden was the most wanted man in America and the government let his family leave the country. how many laws were broken or acts of so called treason were committed that day. I don't have a problem with trump being investigated but I do question the motives for doing it.

rincon wrote:Dude what do you mean no one bats an eye. EVERYONE bats an eye. Bush faced unreal backlash and controversy.

on 9/11 the only plane in America allowed  to fly was the bin laden jet. Osama bin laden was the most wanted man in America and the government let his family leave the country. how many laws were broken or acts of so called treason were committed that day. I don't have a problem with trump being investigated but I do question the motives for doing it.

And you're right to do so.

Appreciated joining @POTUS for meeting with the Freedom Caucus again today. This is it. #PassTheBill pic.twitter.com/XG6lQIy5a6

In case you are wondering, that's a meeting to discuss women’s health and changes to policies in obamacare regarding maternity leave

It's honestly quite sad as Obamacare has a lot of issues, I feel like I could personally make it better with my only cursory knowledge of the subject, and yet they put forward a proposal that was amateurish to the extreme and pleased no one. Moderate republicans should ally with dems to get a healthcare bill that is would be both cheaper and more available, but that won''t happen as US politics puts party first even if it makes sense.

Never understood how you have to pay for your health when needed.

Because everything else is communism according to them 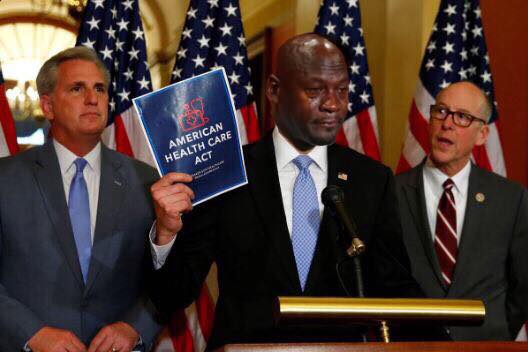 Very good news for every person and Trump himself that this Ryancare didn't go through.

Trump has a huge ego, do you really think he wanted anything to do with this? If he liked it, he would have named as Trumpcare, This is Trump we are talking about. He want it to be about himself if he actually liked it.

This was a move to throw snake Ryan into the wolves. Ryan is done, everyone knows the bill was assembled by him. He has no leverage now.

I expect Trump to wait a few months until O-Care bills go high again, and then have a real repeal and reform led by patriots like Rand Paul, and not globalist like Ryan.

This is like a massive personal failure for Trump. He completely took over the bill & was himself doing everything - the meetings, negotiations, changes - Ryan was completely sidelined in the last week. Trump even threatened the Freedom Caucus. He guaranteed that this would 100% pass.

Now with a massive Super-majority, he couldn't get it passed because the tea party extremist lunatics were not happy every good part wasn't repealed & moderates weren't happy because 24M will lose healthcare & premiums would go up. The ACA is already an ultra right wing plan & you can't go more conservative - It is the Republican Plan !

And lol @ repeal with Rand Paul - Rand Paul is in alliance with the House Freedom Caucus who want to abolish all remaining stripped down good parts, all mandates, protections, repeal Medicaid expansion immediately & so on. He & the Freedom Caucus are radical extremists.I hope they go ahead with some Rand Paul plan later because then Trump will be absolutely drubbed & will lose 2018 House elections & 2020 Presidential elections.

Burning Obamacare to the ground was always a House Republican obsession that Trump, in the heat of the campaign, took up to spite the president while tossing a little red meat to Republicans. “Repeal and replace” is alliterative, after all: it sounds nice enough on an arena stage. It’s just hard to pull off in the real world, as Donald Trump found out on Friday.

Blessed with total control of government, Republicans can only think of how best to burn the house down – and they’re not even doing a good job at that. The House speaker, Paul Ryan, unjustly heralded as a policy wonk, tried to rush his healthcare bill to the floor for a vote on Thursday, only to find the moderates and extremists in his party rebelling. On Friday, Donald Trump was forced to pull the bill, due to lack of support from his own party.

It was a humiliating defeat, which he tried to blame – unbelievably – on the Democrats.

What remains is the fact that Donald Trump couldn’t close the deal. He is hoping everyone blames Ryan, and Trump is lucky that his supporters might do just that. The diehards, inhabiting his post-factual universe, will simply write Ryan off as a loser – they hated him anyway – and hail their king for the bounties he’s still promising.

But healthcare will ultimately be Donald Trump’s problem. That’s how our politics work. So far, the president has been more fatuous than fascistic, though he belatedly realized what an albatross the bill had become. His negotiating powers, whatever they ever were, failed.

Were Trump the deal-making genius his ego tricked himself into believing he was, he would never have taken up this healthcare venture. A recent Quinnipiac University poll found that only 17% of Americans approved of Trumpcare. Trump’s poorest and least educated supporters had much to lose and nothing to gain from the legislation.

Apparently Trump is trying to incite his lunatic base to pin it on Ryan & make him the fall guy for this absolutely humiliating defeat despite him taking over the entire bill - What a complete failure & incompetent hack of a President !

“No, not at all,” Spicer responded. “In fact, the president has met with several groups today, the House Freedom Caucus today, and yesterday, the vice president and the rest of the team were actively involved. He just got done meeting with the House Tuesday Group, a group of moderates, 16 of the 17 that walked in were either ‘maybes’ or ‘nos’… 16 of 17 walked out ‘yeses.’ The president continues to make tremendous progress on that.”

“Look, Eric, I understand the question,” Spicer responded, “but I’m not thinking that way. We put our heart and soul into this bill. The president’s been working the phones, and having meetings consistently for the last several days. He’s been behind this, from the get-go. He’s been working with the speaker, meeting with all sorts of members to get this through and make it the best bill we can.”

Spicer said in his daily press briefing that President Donald Trump "has left everything on the field when it comes to this bill."

Despite pushback from both conservative and moderate Republicans, Trump still demanded that the House vote on the bill on Friday.

At a high-stakes Republican House caucus meeting Thursday night, Office of Management and Budget Director Mick Mulvaney said Trump is done negotiating details of the proposal, NBC reported. If Trump does not get a vote on the proposal, he will move on to other priorities and leave the ACA, popularly known as Obamacare in place, Mulvaney said.

But Spicer repeated his assertion that Ryan’s effort does repeal and replace Obamacare. Conservatives critics of the current plan insist that the bill does not fully replace Obamacare and leaves many elements of Obama’s effort in place until 2020. Spicer dismissed the idea that the White House would sign a bill that wasn’t Ryan’s plan.

“I think the way that we’re doing now is the right and the responsible way to do this,” he said, backing Ryan’s three-pronged solution to address health care.

Spicer described Ryan’s powerpoint presentation earlier in the day on his healthcare plan as “very good” and “phenomenal.”

LeVersacci wrote:Never understood how you have to pay for your health when needed.

Okay doing some retarded shit on daily basis is okay, intimidating and getting on nerves of Germany is not. We all know how that ends lol.

He is a very poor "Deal Maker" if he believes pulling crazy shit & intimidating people always work. Sometimes you try & work with people in a dignified way & it achieves much more !

Unique wrote:so it turns out that maybe Obama did tap his phones by accident

Besides. Snowden confirmed everyone was getting spied on by the NSA. Which all goes back to post 9/11 surveillance politics.

Doubt there was a targeted tap of Trump.

Page 20 of 40
Permissions in this forum:
You cannot reply to topics in this forum
Latest topics
» Transfer Rumours | Tactics | Who to buy/sell etc