#Stampa: #Juve's objective is to have #Pjanic & #Higuain in top shape +in sync with the rest, by #UCL tie v #Sevilla pic.twitter.com/74IM6LZkUQ

Juventus squad for Serie A and Champions League 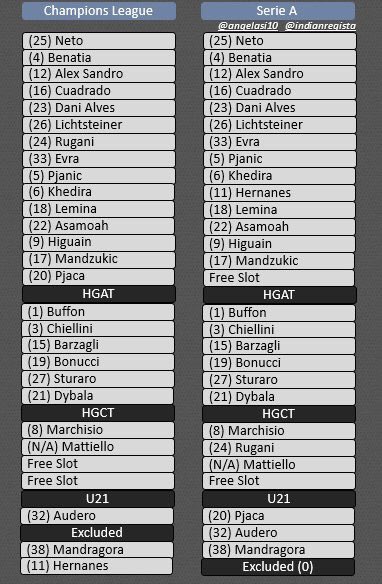 Not feeling comfortable with our midfield situation at all. We are capable of grinding out wins in Serie A even during periods of injury crisis but Champions League is obviously a totally different story.

Also if I'm not mistaken this is the 2nd season in a row that Marchisio misses pre-season. Under the current circumstances buying a midfielder in January becomes essential if we really want to go far in the competition.

The former Manchester United manager is regarded by many as the greatest of all time, winning the English Premier League 13 times, the Champions League twice and leading Aberdeen to three Scottish titles and the Cup Winners’ Cup.

“I can’t remember, in the 50 years of my career, such big eliminations of Italian clubs,” Ferguson said at the UEFA Coaches Forum in Nyon, as reported by Gazzetta dello Sport.

“Football goes in cycles, and at the moment Barcelona and Real Madrid have something extra. I think that Juventus though, like Bayern [Munich] are a team who can beat anyone and so they could even win the Champions League.

“Allegri? He’s one of Juventus’ strong points. He’s a great Coach. Another important thing is the stadium, it’s really nice and that’s a rarity in Italy.”

Confirmed CL squad. Hernanes is included but Licht left out

for the wing we have Cuadrado and Alves, I don't expect Lichtainer to play

for the center midfield we have guys like Marchisio, Pjanic but considering Marchisio is injured we need Hernanes there as an option to increase attacking qualities,

Confirmed CL squad. Hernanes is included but Licht left out

So Lichtsteiner is gone in January then?
That's very surprising

Hernanes was needed due to our shortage in midfield. The squad gets redone in January after the transfer window so I'm assuming Witsel or another midfielder will replace him at that time.

As for Licht there are only so many spots available on the CL roster. I don't necessarily think he will be gone in January, but most likely he is done in the summer as his contract is up. If he goes in January then we would need two players, a midfielder and a backup fullback, for the winter mercato.

I don't think that's the reason. Maybe he was indeed pushing for a move to Inter. There were reports that Beppe and Paratici were furious with his agent. Let's use this thread for the CL games and the other one for the domestic games.

higuain + dybala
what a pair

Evra-Asamoah-Lemina is far too negative for this game. Terrible left side. No creativity or real passing.

I hope Alves rides the bench. Absolutely useless tonight and unimpressive in 2 Serie A games. Litch and Cuadrado should be the ones to play.

C'mon rincon! Alves was the only source of creativity/chance creation in this match.

Play improved ALOT when Pjanic came in! We were useless with Asamoah and Lemina in the center!

We need to feed Higuain better!!!!

Sevilla parked the bus so not much to say. That was a push on Pjaca and a clear penalty as well.

Allegri screwed up tactically. Once Sandro and Pjanic came in it was a completely different game. Also, Cuadrado should have replaced Alves, but maybe he's not in tip top shape yet.

Next game will be different. I can see us dominating Serie A so we really need to focus on these CL games and give players proper rest. We have lots of good subs now and when Marchisio comes back our starting lineup will shine.

Also, Alves sucked in the first half but the second half he was creating alot of chances that just didn't get converted. I think he is still acclimating himself to Serie A. I'll give him another month before I judge him completely. But luckily we have Licht who can play in the Serie A games to give Alves the proper rest.

What did Alves do? all it was was cross after cross to no end product, a couple even just went all the way to Evra. Dybala created all chances in the first half and Khedira was much more involved.

Think about the right side, Alves was between Khedira and Dybala and still didn't produce much.

The left side was terrible all first half, then Pjanic and Sandro came in and it was so much better. Alves had no excuse, he was the weakest player on the right by far. Put someone like Sandro there and it would be 10x better. And we had Cuadrado on the bench...

Lemina is pointless at anything but the most basic of roles in midfield still. If Pjanic is not there to take reign then we our midfield looks toothless with him. Can't until Marchisio is back or when Allegri finally decides that Pjanic starts every game.

Alves did create some good chances in the second half. But yeah his performance overall wasn't very good. At least we have Licht in Serie A and Cuadrado in CL. He's still adjusting I think. He's never played in a 3-5-2 before. Neither has Pjanic. It's still an adjustment period. We almost had as many changes this year as last year and look what happened last year. At least this year we are undefeated.

Allegri needs to get his sh** together though. Asamoah and Evra on the left together should never be played again.

Our wing backs were terrible today and not supporting the midfield at all.Especially Evra is clearly finished offe sively,I can't remember last time he won 2-3 1vs1 in a game.Allegri must play Sandro in CHL matches.

Next I saw again a limited Lemina in that position, I would put Khedira before defense,even though he's been really good as a B2B he lacks speed to help our attack on counters.Lemina is better moving forward.

We must use Pjaca more, he played 9 minutes and did way more than Asamoah and Evra did the whole game.

Not starting Pjanic was a huge mistake as well,he is the only creative midfielder we have ffs.

We were a bit wasteful as well, maybe with a bit more luck and the above changes we could have won.
But it's time to think about Inter now, we must win to keep the morale up.

Agreed with most of what was said by all of y'all.

Until Marchisio comes back (mid october ?) we shall never use a line-up without Pjanic and/or Cuadrado again. No links were made from the recovery to the attack, this trio of midfielders was a very bad idea.

Alves was useless today. In second half he was still underperforming despite a couple of chances created. He blew many crosses way too wide. Not good enough from him but he deserves some time to adapt.

Yesterday at 4:50 am by BarcaLearning

Yesterday at 2:34 am by Hapless_Hans