18 year old Messi on a potato field against Mourinho's Chelsea, team that still holds the point record of Premier League and was 49 games undefeated at home.

Barcelona was lucky they faced easily the toughest team in CL that season when Messi was still fit.

sad that messi has a fraction of this energy and stamina these days. Players like Robben, Zanetti maintained their physical conditions late into their careers, while it seems messi's has declined precipitously 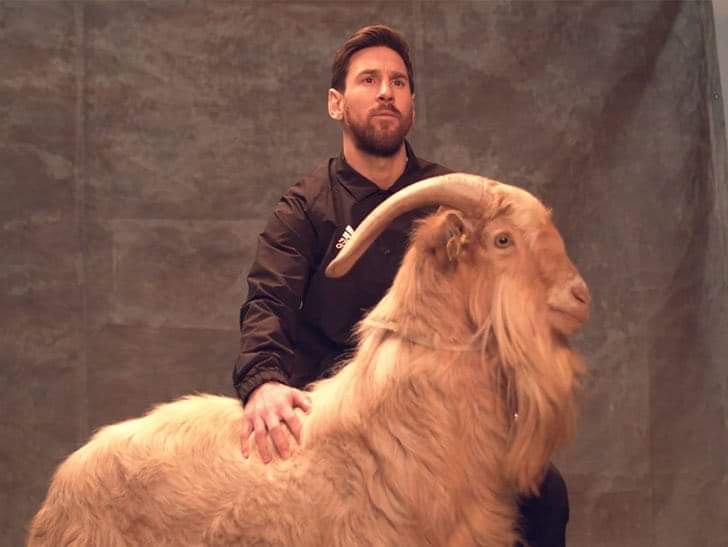 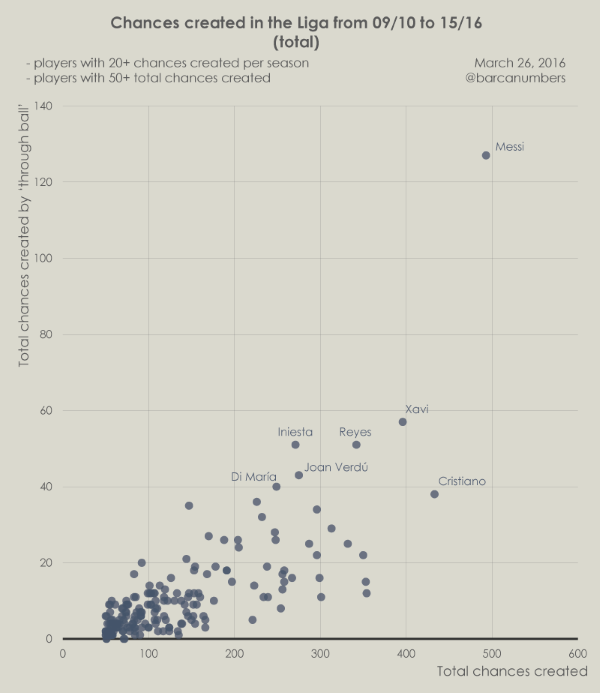 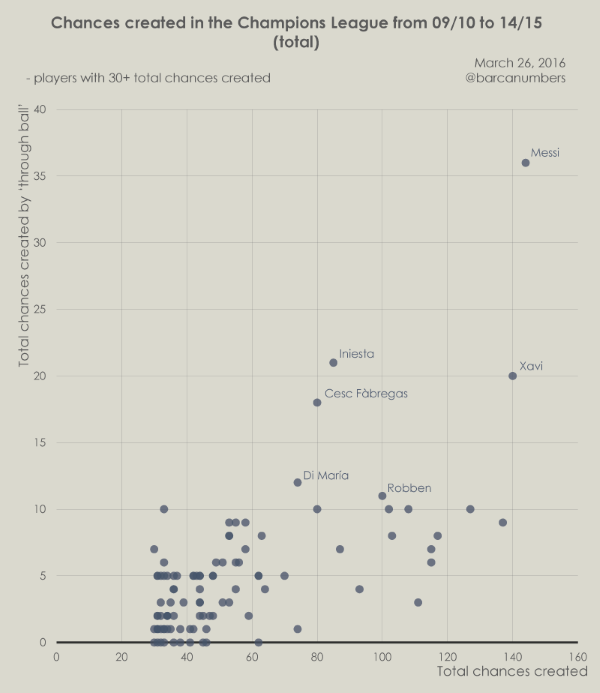 Introducing Messi’s pre-assisted goals, yet another aspect that he is unique. 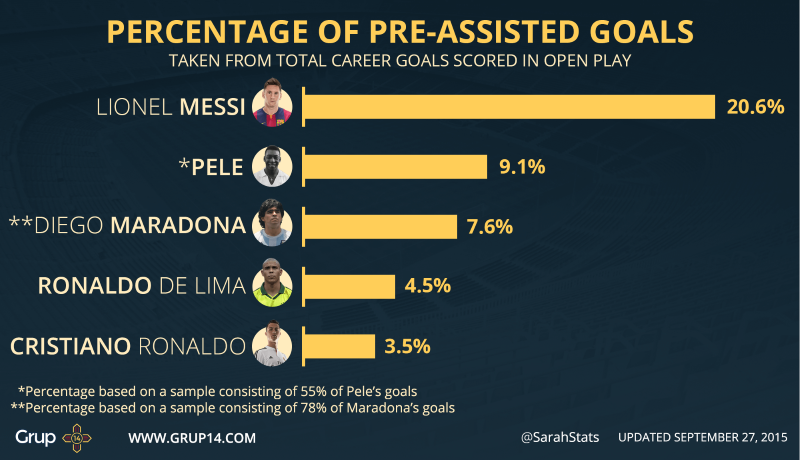 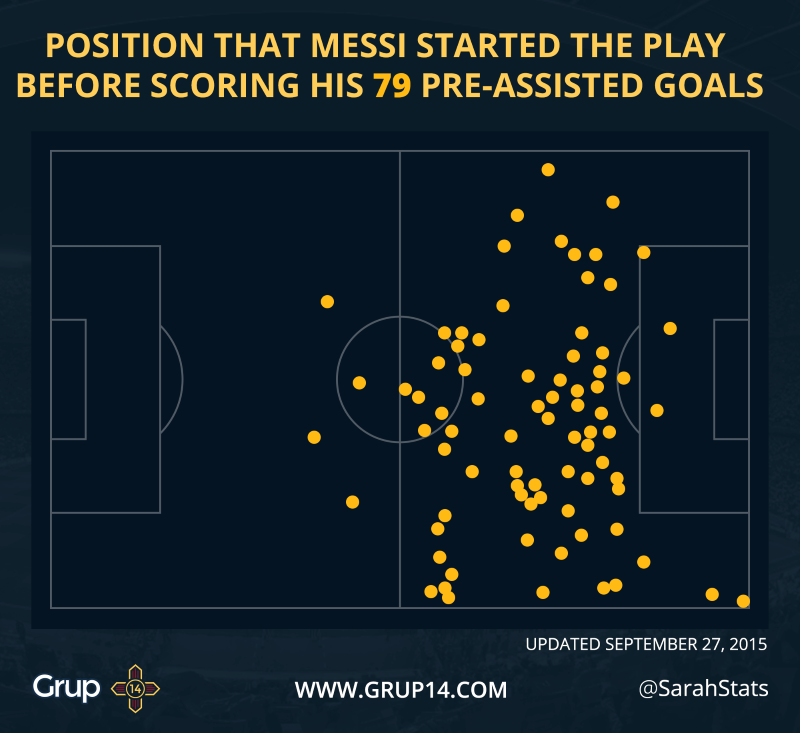 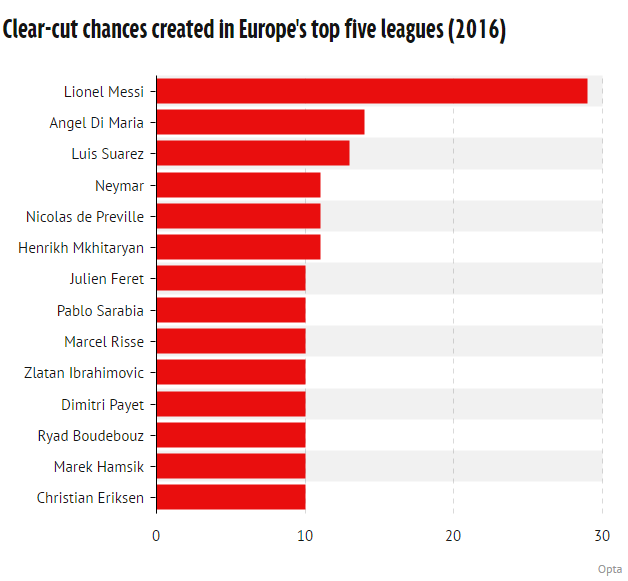 Guardiola - "This Barça era wouldn't have been possible without Messi, the best player that has ever existed and the best that'll ever exist"
_________________
- Come with me. Save yourself. You don't owe Argentine people any more. You've given them everything.
- Not everything. Not yet.

83% importance in not winning anything ?

Most competitive team titles (no fixed or invitational)

Brian McBride - “I think Messi is the best player ever. He’s changed the way people look at how you can do things with the ball at your feet.”
_________________
- Come with me. Save yourself. You don't owe Argentine people any more. You've given them everything.
- Not everything. Not yet.

"But the mood was also weird, in part because of the unfairness of boiling Messi down to a YouTube highlights reel, because there you only see the goals, the dribbles, the moves. You don’t see that 90 percent of the time, Messi is boring to watch unless you are a tactics nerd, or a coach trying to explain to a player how to move so that they are always in a spot where a teammate needs them.

In the crowd, people watched and waited for magic, not fully comprehending that the magic was when Messi was most Messi, that time before and in between when the ball went into the net. It is that time, and you can only see it live, to appreciate how differently Messi moves.

Players run. Legs churn, feet move, the body is propelled. Live, it’s almost like Messi is moving along a lubricated slot in the ground. There is effort. There has to be. But the quality of his movement is spatially odd, as though he is sliding around on the pitch on ice skates. One moment he’s there, and the next, he’s there. We watch on TV and think, “How the hell can defenders lose track of Messi?” But he doesn’t move normally. He plays the entire game as though it was that time when Barça got off the plane in some city. The place went nuts as the players alighted from the plane. Messi took advantage of the buzz to hunch his shoulders and sneak past it all. Nothing to see here. That is how he plays, which makes it weird when you, like most people in the crowd, plunked down your money to see him do something spectacular.

When Luis Suarez doesn’t have the ball, he is menace — moving, shoving, glowering, screaming even when silent. Defenders pay attention to him because he is so loud. Messi is quiet. So very, very quiet, almost soft. Very little of what Messi does is spectacular, even as it is astonishing. When he scored those goals people went nuts, but it was almost a sense of surprise, this ordinary box with a giant pile of “WHOA!” inside. Messi was standing there one moment, and in the next the ball was in the net. It’s like watching Dali draw a straight line. Sure, it’s just a line. But what a line. Look at how he holds the pen, the lack of doubt, the way the wrist sits. It’s art.

There was almost this sense of frustration when “nothing” happened, because here is the thing about Messi: he isn’t a player that you can fully comprehend the remarkable qualities of. The crux of the Messi vs Ronaldo debate is easy to explain. Ronaldo runs, he huffs, he puffs, he leaps. He takes crazy shots from distance. When he stands over a free kick it’s as if a gunslinger is waiting to dispatch yet another miscreant. He leaps high, runs fast, and you see it. When he has success, it is because he has bent the match to his will. He’s an exclamation point to Messi’s period.

For Messi the destination is the point, rather than the journey. When Messi runs, it is only because it’s faster than walking. He doesn’t huff or puff, and sweating is rare. His arms are at his sides a lot of the time. He doesn’t leap or take speculative shots. He stands over a free kick as if trying to solve a math problem. Messi has success not because he has bent the game to his will but rather that he understands how the match is angling, and positions himself to take advantage of that shape.

There is no purer expression of this than the first goal. In the picture above, Messi is just standing there. It seems crazy that the most dangerous attacker in the game would be left to just … stand there. Dani Alves once said of Xavi that he plays into the future. Messi seems to have already seen the future and knows where to be. It’s an uncanny quality of great players who seem to have things figured out. My seat at Solder Field was about 100 feet or so from the pitch, and it was odd to see Messi react to play just before the goal. He watched, shambled, moved a bit then tracked play. You could see his eyes watching, figuring it out. Then he scurried to a spot, and the ball came to him. Goal.

Yet the buildup is crucial. Messi lays off the pass, then ghosts into space, standing there to hold himself on, in space. You can ask how he knew Higuain would put his face in the way of the ball, you can ask how he knew that carom would fall directly to his foot, but that isn’t the point. Messi sees the game in a way that always puts him around the ball, and always at the point of maximum influence, which isn’t necessarily maximum danger in the personal stats context. Messi’s game is like one of those perpetual motion machines. Doors slam, gates close, dominoes fall at at the end, “Ta daaa!”

Kun Aguero is, when fit, one of the game’s top attackers. To watch him running around was remarkable, especially when you compare it to Messi. Aguero runs around like he’s looking for something he lost. He is chasing the ball, rather than understanding the game and moving to where the ball will be. Almost every player in the game does that, however.

Everyone saw the goal and for Messi, the goal is the point. His objective is to figure out the most effective way to put the ball in the back of the net. Everything else is secondary to that, which makes him frustrating to watch sometimes. There isn’t any show, nothing to see. He just slides around into the spaces and half spaces left by opponents. The muttering about how he has to drop deep to receive the ball as failure is a narrative that doesn’t understand what Messi has evolved into.

Teams still haven’t figured out that he has that pass, as evidenced by the last Argentina goal, the most casual assist plopped into the box. He does that pass time and again, but nobody plays him for it, because he’s just walking with the ball. This is another thing that you can’t catch on television, is the astonishing velocity and force with which he strikes the ball, with an almost nonexistent windup. He was just strolling with the ball at his feet and then, suddenly, it was on the way. There isn’t time to react."
_________________
- Come with me. Save yourself. You don't owe Argentine people any more. You've given them everything.
- Not everything. Not yet.

Today at 6:37 pm by BarrileteCosmico

Today at 5:16 pm by RealGunner

Yesterday at 3:11 pm by Nishankly

Yesterday at 2:57 pm by Warrior