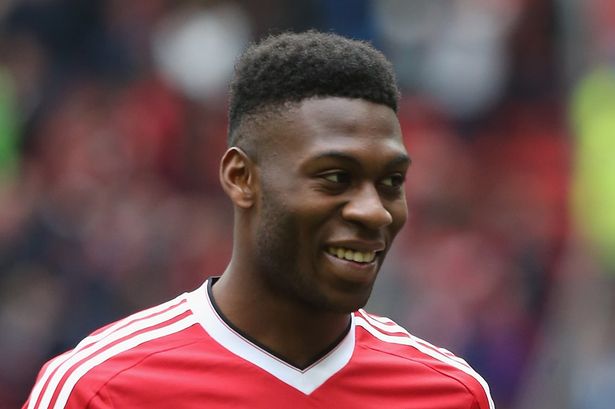 "He can dribble, he can cross, but he can also play in the centre-half position or in midfield. He’s a multi-functional player. But it is not easy to play in the first team when you are so young because the play is so quick, especially against Arsenal, because they are also moving the ball quickly. So it was a good debut for him.”
-LVG
About time we make a thread for the lad imho.
Our brightest prospect. Certainly one for the future. A vital member of our supposed Class of 16.

Lads and Ladies hereby Presenting Timbo a.k.a Totje a.k.a TFM a.k.a Immensahhhh!!

STATS
Played 10 times for us last season in all competitions. 254 minutes. Whoscored gave him a rating of 6.7 which is pretty good considering 6 of the 8 appearances were as substitutes.

Best performance of his career arguably was against Spurs. He was a beast that day playing as a Right back. Didnt give top players such as Erikson, Alli and Lamela an inch. Further evidenced by the fact that immediately after he was forced off due to injury they scored 3 goals from that side.
Highlights vs Spurs
https://www.youtube.com/watch?v=8AXXli9L3RA
Another great match was against Watford.
Came in for the injured Mike Smalling, playing as a CB and was essentially a one man defense that match as Blind had an unusual stinker. A sterling display in which kept Odion Ighalo in his pocket all day.

THE NEW SEASON
2016/17 is Going to be an important season for the lad. First season its easy for youngsters. Tougher part is to emulate the promise you have shown in your second season. So in that regard, with TFM I think we United fans can be a lot more confident than with some of our other kids.

Jose Mourinho has already acknowledged his talent. He is actually Built to play in a Mourinho system. Strong, physical, aggressive, technical. And he is only 18!!
Right Back will be a position where he can really stamp his authority this season. Darmian is not exactly doing well. Valencia is a mistake waiting to happen and has no positional discipline. So if he can grab his chances, I kinda see Jose giving him a go from that spot.

Has got the potential to be a WC CDM. And the kid's hard working, humble and grounded, so if things go according to plan,

Sky's the limit for our Timbo.

https://www.youtube.com/watch?v=WH9TTg9OHDE
A Beautiful video by 90/24 sports showing TFM's life, buddies in the Netherlands.

I completely agree with you. The young boy is amazing!

Saw him today, he reminded me what a beast he is, physically. Also, played well as a full back on the right side. "Well" meaning he was decent, avoiding any injuries and also worked enough to become more fit.

Its quite refreshing to see him a start the game today. Not that it says much as its only a friendly. But still I kind of think that Mourinho really rates this kid.
Can really be our Alaba in the future.

Seems very serious and focused on what's strict necessary in a game, doesn't try to get the attention with useless attempts of dribblings like other players usually do at his age. You can see on his face the level of devotion and self-sacrifice, even if it is a friendly game.

It's somehow the opposite of Depay regarding the attitude. Depay is mostly irritated, frustrated and lazy on the pitch. He is wasting his talent if he keeps it like this. Hope he'll do well though.

According to the Times, Mourinho has told Fosu Mensah that he holds him in high regards and he'll be a part of the first team squad this yr.

He is injured, that's why he didn't go to Sweden with the rest of the squad. Mourinho said it is something minor, but important enough to avoid any complication, especially because he is a young player. Hopefully, he will come back stronger!

Imagine a midfield with Fosu Mensah, Pogba and James Rodriguez. We should focus on James imo.

PS. The OP is fking amazing.

Glory, do you have Facebook/Twitter/LinkedIn? I want to hire you.

Yea i will be willing to trade anything if in return I can get a midfield of Pogbah and Mensah. The very prospect of that is mouth watery.

BTW havent you already praised me once for the OP?

Thanks once again anyway. Yea I do have fb btw. Twitter not active enough. Cheers.

@Glory wrote:Yea i will be willing to trade anything if in return I can get a midfield of Pogbah and Mensah. The very prospect of that is mouth watery.

BTW havent you already praised me once for the OP?

Thanks once again anyway. Yea I do have fb btw. Twitter not active enough. Cheers.

Send me a PM with your fb.

2nd time I praised the OP, I truly realized the hard work behind it. First time it was the aesthetics alone.

Great video in the OP.

He comes off as incredibly humble.

Honestly, I thought a little bit about it and I'd start with him, Pogba and Herrera. That would be an Immense-ah midfield after a few games.

As per the Telegraph this beaut has signed a new 4 year contract.

I saw a few pictures with him and Pogba from the training ground in the AON Complex. He looked sharp and very close to the french man. Good lads!

He comes off as incredibly humble.

@Vlad the Impaler wrote:I saw a few pictures with him and Pogba from the training ground in the AON Complex. He looked sharp and very close to the french man. Good lads!

Have you guys seen in that OP brotherhood video one of his buddies tell something like people always compare him to Pogba but he is different from Pog.

Its great now that both of them can grow to be friends and form an understanding.

I noticed that, Glory!

Everybody's different, people differ. But, I think I understand what that guy wanted to claim.

The fact that we can see a few patterns in football players' careers and in the way they develop their personality.

Concerning this, I agree that Timothy is different. Main aspect that we can observe is that Pogba likes be popular and has an urge to be in the center of attention much more. Also, he likes to have fun and post a lot of photos and funny clips on social media websites.

He is very egocentric, but at the same time, a very good professional and seems to be the generous kind of guy. This puts his egocentric character in a good balance.

Still, we don't know TFM very well and we shall wait to find out more about him.

.@Timboo95 has signed a new contract at #MUFC until June 2020, with the option for a further year! Full statement: https://t.co/2WVVyaSIYO pic.twitter.com/nw5ky0DCrb

Excellent news.
Jose : "Tim is young player with great potential. I am pleased that he has signed a new contract and I am delighted at the progress he has made so far. It is clear to see that he is learning every day in training and there will be plenty of opportunities for him as the season continues."

Yesterday at 8:48 am by Harmonica

Yesterday at 4:35 am by McLewis