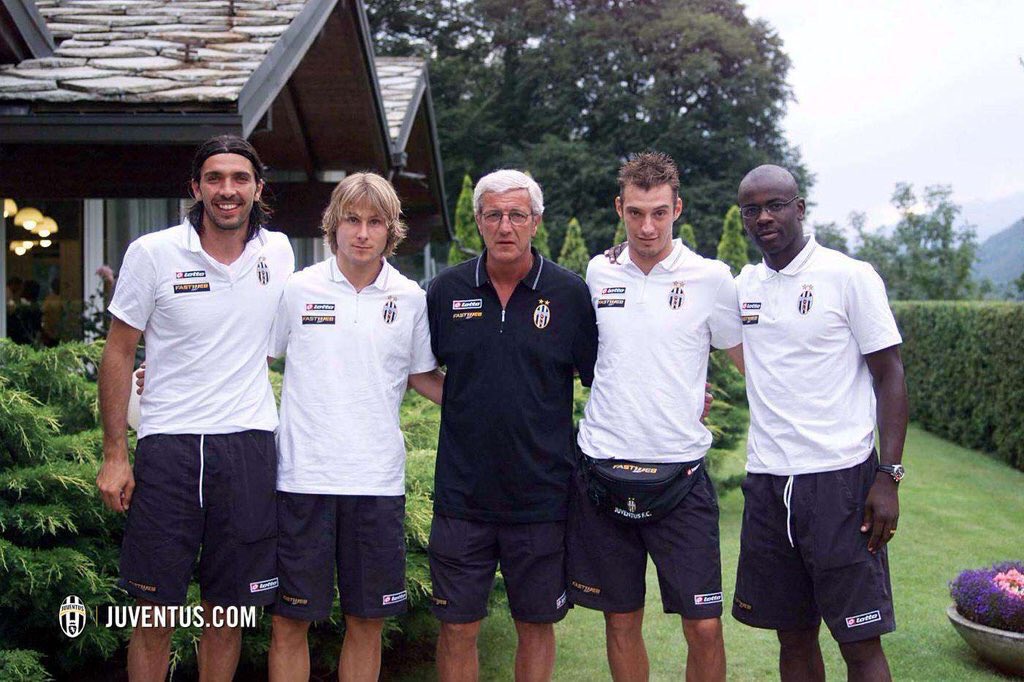 with the money that we can get from we can bring 3 x PJANIC kind of players and I don't know how is that not impressive, its really impressive

It sounds great in theory but who are these 3 Pjanic quality players for these prices?

So far we bought Pjanic for 32 and sold Morata for 30. Cuadrado left for free as well as Caceres and Padoin. Then we got Dani Alves for free. And paid 10 for Lemina.

So we spend like 10 mill and now we "only" need a CB and a forward. We can afford that without selling Pogba. Specially if Pereyra leaves.

Say Pogba nets us like 80 mill, how do we significantly improve our team? The defense wont get better cause its already the best, Dybala will not hit the bench, so what do we buy?

Another LCM for Pogba's place.
A striker/SS/winger

I don't see how its worth it unless we can get players that are supposedly "unmovable" like Cavani, Verratti, Thiago, etc.

If we could turn Pogba into Cavani and Thiago then its worth considering but that is probably not the case. And we probably will have to sell Mandzukic.

Buffon
could work, but extremelly difficult. Would rather keep Pogba for longer until we have clear needs.

Selling Pogba even for 80m is a shit move tbh.

If he leaves then we have to replace him. Who's a great BTB not already at Juve these days ? Vidal, Nainggolan... both not likely to join.

The only valuable offer would be a swap Pogba vs Kroos + cash. I'm assuming this is out of the question for Real anyway...

Benatia is probably coming on loan. The only hole left is a forward (since the departure of Cuadrado i would prefer a versatile forward like Sanchez). And money is not a concern.

Someone was saying how Raiola or Pogba get a good percent of a transfer fee, if thats true then I wouldnt be surprised if we end up with around 80mill from the transfer.

Nope. It wont happen this year. It feels to me like some Juve fans are desperately hoping it happens though. (Not directed at you , dont mistake, just the feeling in general, reading twitter, Tuz forums etc)


Wow. He did. He had a lot of Juve on his twitter homepage and definitely followed them. Now he has a very bland page and only following the France national team.

I'm not hoping it happens, I don't see us improving our starting 11 by selling Pogba. I am hoping for a conclusion though, obviously this is due to the Euro that we just have to sit through this speculation.

I do like rincon's ideas a lot regarding his starting 11, but I look at it like this.

Juventus is clearly gearing up to win the Champions League:
-We have a good blend of youth with experience
-We have a team to compete NOW, the back line is all 30 or above, Alves, Evra and Lichtsteiner 30 + years old

If we can retain Pogba for 1-2 more seasons, and then he wishes to be sold, we can then use that money to begin our next "cycle", this is still very much the group of 2011 began by Conte and it will be that way until Buffon and part of the defensive core that has brought us such great success retires.

Right now, the most competitive 11 we can field will always include Pogba. In my opinion we are one world class #9 away from everything, with the shortage of said players Mandzukic is sure to be the starter throughout this season and I hope he does well (I just identify this position as our "weaker" position and thus the area to improve most upon). So all we really need is one forward like Morata who can play a variety of positions along the forward line and can relied upon to be an impact player now.

The time is now brothers.

This thread is not so much a Pogba thread, although it is going that way. It's more a significant event in our history: Buffon, Nedved, Thuram


Wow. He did. He had a lot of Juve on his twitter homepage and definitely followed them. Now he has a very bland page and only following the France national team.

He never followed Juve on twitter. Keep speculating like L'Equipe as much as you want. Wont happen this year

Don't remember if he followed them but he definitely had Juve colors all over his twitter page.  It's all gone

Strange to me that he would follow France NT but not Juve. But I never checked what he was following before so I can't say that he did or didn't. The color scheme is a definite change though.

rincon wrote:It sounds great in theory but who are these 3 Pjanic quality players for these prices?


the midfield is a serious problem it is because:
MARCHISIO and KHEDIRA are having injury problems
CUADRADO is gone
and you easy tell POGBA wants to move to another club

we have PJANIC now but he cannot compensate for absence of all : CUADRADO, POGBA, KHEDIRA, MARCHISIO

if we sacrifice POGBA we can bring another 2 midfilders like GOMES + KANTE ( just an example not necessary ) and we also can use one of LEMINA, STURARO, HERNANES

I think Midfield is a problem because what I just said above Pogba wants out, Cuadrado is gone, and injury problems it means we have no midfielders except the players we used for bench last season HERNANES, LEMINA, STURARo

Cuadrado was never used in the midfield though Moggi

Marchisio will return, Khedira will miss some games but when all healthy, you have Pogba, Khedira, Marchisio and Pogba for 3 starting roles. That's 4 top midfielders, for 3 roles with suitable back ups. I don't see anything wrong with that.

Worst case scenario is come January you have to buy a midfielder, would that be so awful?

Luca wrote:Cuadrado was never used in the midfield though Moggi


one of CUADRADO, PERYERA, HERNANES has been used as a 4th midfielder

or sometimes 4-3-1-2 when CUADRADO was on the bench and was using one of PERYRA, HERNANES

one of these guys made the 4th midfielder

He's still following Juve on Instagram so whatever that means

Luca wrote:Cuadrado was never used in the midfield though Moggi


one of CUADRADO, PERYERA, HERNANES has been used as a 4th midfielder

or sometimes 4-3-1-2 when CUADRADO was on the bench and was using one of PERYRA, HERNANES

one of these guys made the 4th midfielder

In those situations, Cuadrado was never a CM though. He was on the right side of a 4-3-3 or in a solely attacking role.

Hernanes has been used in the CM, Pereyra too.. both are still here.

Anyways, we've added Pjanic and moved no one, I would say were deeper at the midfield than we were last season, with or without Marchisio's injury.

According to 10sport, Juventus and RB Leipzig are in advanced talks about the transfer of Paul Pogba. The recently promoted Bundesliga side reportedly offered 100M for the 23-year old midfielder, the highest bid until now.

The frenchmen was spotted earlier today in Clairefontaine, drinking a can of Red Bull.

What kind of logic is that?
"the midfield is a serious problem" so the answer is to sell one of our best midfielders?

What in the world will Kante and Gomes bring to this team that Pogba and Asamoah can't? talk about a downgrade. Gomes might be a legit talent, I haven't watched much Valencia, but I did watch him with Portugal and he failed and got benched by a 18 year old. And Kante? who is he better at and at what? he is not better in front of the defense than Marchisio, not better as B2B than Pogba and not better as CM than Khedira.

Nevermind that we have Pjanic now too so we have 4 truly outstanding midfielders plus Asamoah, Sturaro and whoever stays. We have too many midfielders right now, we definitely do not need quantity. Some even have to go (probably one of Pereyra and Hernanes) plus Mandragora and Sensi on loan.

Unless we bring in Verratti, Thiago, or someone of that quality (note that Gundogan, Vidal, Nainggolan and most others are unavailable) our midfield will take a hit.

Marchisio and Pjanic in a two man midfield under Allegri is utopia. Won't happen imo.

he keeps talking on the media how he likes MESSI, ZIDANE, all he wants is JUVEXIT and everyone can see that except some JUVENTUS fans who don't want to see it

as soon as there comes a good offer POGBA is gone

But you're acting like there's no money to spend unless Pogba is sold.

And again, were talking about diminishing returns here. The starting 11 is basically set with Pogba and basically destroyed without him as now we need to replace a central midfielder with a special skill set which is not easy to do.

Pogba literally has not said one word about the future because he's concentrated on the Euro, so everything at this point is speculation. If he wants to leave I wish him all the best and rest assured, he will leave but there is an immense difference between selling him and Pogba wanting to leave.

I've kept hearing this 'reinvest Pogba money' for like three years now. When the time comes we'll eventually do it but after just having started a new cycle last year, we're not going to give up our prized asset just to make dozens of changes again. That's not how this management operates. As Luca said, this side is on the cusp of challenging for the CL and it simply won't happen if we sell one of our best players just to get a bunch of downgrades as a result of this massively inflated market. This is why the 2001 scenario doesn't apply here.

S wrote:I've kept hearing this 'reinvest Pogba money' for like three years now. When the time comes we'll eventually do it but after just having started a new cycle last year, we're not going to give up our prized asset just to make dozens of changes again. That's not how this management operates. As Luca said, this side is on the cusp of challenging for the CL and it simply won't happen if we sell one of our best players just to get a bunch of downgrades as a result of this massively inflated market. This is why the 2001 scenario doesn't apply here.

Not to mention, the whole reinvest the money argument doesn't hold true. Juventus has been completing moves each and every single summer without selling major parts with the exception of Vidal (who wanted to leave).

If Pogba leaves, we know the money will be reinvested but we can look at it in the simplest terms:

We're not a broke club, nor are we a selling club. On the market, the only team that rivals us is Atletico Madrid in terms of "smart" signings (in my opinion).

When it's about fielding the best 11 players, certainly it includes Pogba. And all this goes out the window if he comes out and says its time to go, and if he does, we'll adjust like we always have. But jumping to sell him and turning our backs on Paul based on the speculation isn't something I'll endorse because it isn't a needed sacrifice.