Which teams will go through? (Choose 2, please) 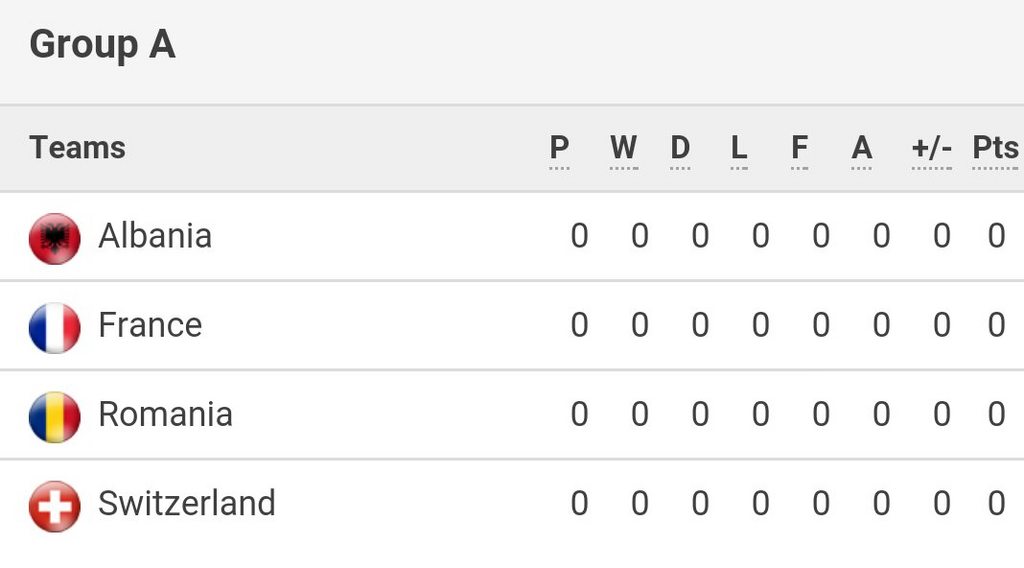 Interesting, actual Albanians vs the half Swiss half Albanian team.

Wonder if that will get heated tbh

France should walk it. I see Switzerland taking second

I added a poll to the thread - please feel free to vote!

CBarca wrote:Interesting, actual Albanians vs the half Swiss half Albanian team.

Wonder if that will get heated tbh

France should walk it. I see Switzerland taking second

Last time we met, there were mixed feeling. Players were booed, Shaqiri scored and gave the crowd the silence gesture, while Xhaka refused to score in two chances one in which was

Looking forward to it

France      vs      Romania
France host Romania on Friday in the opening match of Euro 2016. The host nation will be looking to claim all three points in this Group A encounter, while Romania are seeking an upset.

Jonathan Johnson: It is absolutely vital for France to get off to a winning start. With plenty of pressure on the hosts going into the opening Group A fixture, the return to competitive football after an almost two-year absence could be a shock. If Didier Deschamps' men are on the receiving end of a surprise result in their first match at Stade de France, Les Bleus' chances of reaching the latter stages could be jeopardised, with Albania and Switzerland to follow. The French need to make the most of home advantage and boost their cautiously optimistic supporters with a strong early performance -- similar to how the two-time European champions got their 2014 FIFA World Cup campaign underway in Brazil.

Emanuel Rosu: Apart from hearing about Steliano Filip's minor injury, the Romania fans were left without any major news from their national team in the week before the opening game at Euro 2016. Manager Anghel Iordanescu chose a rather militaristic approach to the media and supporters, hoping to get maximum concentration from his players. He even sent the goalkeeping coach and the fan club president to attend Tuesday's press conference, while the team's psychologist worked to get the players mentally ready for the test against France. Almost all the players are calling the game against France "the biggest of their lives." The interest in Romania is so big that it could lead to a new TV ratings record. A positive result could lead people out of their houses to celebrate in downtown Bucharest, just like in the old days of Gheorghe Hagi's generation in the 1990s.

JJ: Olivier Giroud against Romania's Vlad Chiriches has the potential to be the key battle on opening evening. The Arsenal man is in good form at the moment, having scored three goals in two recent warm-up fixtures and seven times in his past seven friendly outings with France. Deschamps needs Giroud to maintain his current hot streak and, more importantly, remain high on confidence, as the Gunners star will be the focal point of his attack for the majority of the tournament. Making a scoring start against the Romanians could set Giroud up for a run at the Golden Boot this summer, but if he is to find the back of the net, he will need to find a way past Chiriches.

ER: At 35, Razvan Rat has left his best days behind him. Despite a shoulder injury that restricted him to just 15 minutes of football at club level since the beginning of the year, Rat will keep his starting position, thanks to his experience and character. No other player was capable of challenging for the left-back berth, though Steliano Filip put in a courageous display in the 0-0 draw with Spain in March. Life won't be easy for Romania's most-capped current international. He will add one more to his 111 appearances, but Antoine Griezmann is likely to trouble him. Rat has had obvious defensive problems for quite a while, and his participation in the other half of the pitch has suffered too. An in-form Griezmann could make Rat suffer far more than other more modest opponents already have. His lack of playing time with Rayo Vallecano won't help, despite his constant claims that he is determined to be fully fit.

JJ: Although Giroud is the player Deschamps hopes will excel in front of goal on Friday in Paris, Atletico Madrid's Antoine Griezmann is the man who could ultimately play the starring role. Because of extended club duty, the 25-year-old was able to play only 45 minutes of the 3-0 friendly win over Scotland last weekend in Metz. However, he is likely to start against Romania. Les Bleus need Griezmann to pick up where he left off in March, after noncompetitive victories over the Netherlands and Russia. If he does, Romania could suffer at the hands of the hosts' No. 7.

ER: Iordanescu will surely focus his strategy on the player best suited for his tactical approach: Florin Andone. Andone scored 21 goals for Cordoba the past season and is likely to start as a lone striker at the Stade de France. This is exactly the kind game in which Andone loves to play, and it will serve as an important test of his big-game potential. The 23-year-old, who had a great season in Spain's second tier, is hungry, skilled and ready to fight whoever's in front of him for goals. He is capable of dragging defenders out of position without much effort. Good with and without the ball, Andone is quick and always ready to challenge his marker, and he gets most of his decisions in front of goal right.

JJ: France win 3-1. Les Bleus get off to a winning start in the capital by scoring a couple goals, but the questionable French defence continues to concern Deschamps.

ER: If Romania play to their capabilities, they can hope for a draw. I'm hoping for the same thing: 1-1.

For the people who can read German (or who can live with Google's translations): The Swiss magazine Tagesanzeiger.ch wrote a fantastic article about the two Xhaka brothers Granit and Taulant here, how they developed as football players and how they ended up choosing two different national teams in Switzerland and Albania.

Chiriches, Rat, and Sapunaru are the only 3 players I've heard of on the Romanian team.

Don't call me James wrote:Chiriches, Rat, and Sapunaru are the only 3 players I've heard of on the Romanian team.

We have a shit team and it's not going to change for a while. That senile old man Iordanescu didn't call up Maxim who is by far the best player we have and our number 10 that is that scrub from Steaua Adi Popa.

what a shit match

In saying that,watch him score the only goal of the game.

I feel like benzema or lacazzete would've been better suited for the no. 9 in this match given there is payet, greizeman, and pogba that are pretty creative for them. Not taking anything away from giroud tho.

If this is the quality of the Euros I don't think I'm going to bother getting up to watch any more matches until knockouts...

Griezmann and Matuidi have been ordinary too. Bring the 2 wunderkids please. Martial and Coman. They will change the game.

Martial should replace Giroud . Contributes nothing to the game .

Pretty good by giroud, nick of time, and payet for the assist!

EVra what a dumbass.

Damn payet that was amazing, out of no where!