all 8 episodes of psycho pass season 3 will be 1 hr long, interesting

skeptical it's not shit though

blade of the immortal anime in October, looks violent AF. NO EXCUSES for people that haven't read it.

@Kaladin wrote:The Wano arc is insane, lots of stuff happening, now we got Reverie too

In the past year i've read Berserk, JoJo and Vinland Saga. Any others that absolutely must get off the bucket list? And dont recommend me contemporary slice of life shit please.

can't wait for the Haikyuu anime to return in Jnauary, read the manga and it's great but not touching the anime.

Just binged season 1 of Attack on Titan again. I forgot how good it is. Forgot so much so it felt like watching it for the first time (can you believe it came 7 years ago?)

The ape titan speaking in the 1st episode. One of the best WTF moments ever.

in for a wild ride

need you marathoning 2 and 3

Vinland Saga is another GOAT adaptation

Yep definitely unspoiled. Or if i got spoiled i don't remember.

Are you keeping up to date with vinland saga? is it true to the manga?

I'm watching some small clips and highlights of it each week lol, but yeah, it's a very faithful adaptation so far and looks great

one of them is a Basketball manga that's apparently very popular in Japan, Ahiru no Sora, seems good so far.

The other one is a cyberpunk, hard-boiled detective anime. With a small twist. The Main character has a gun for a head. 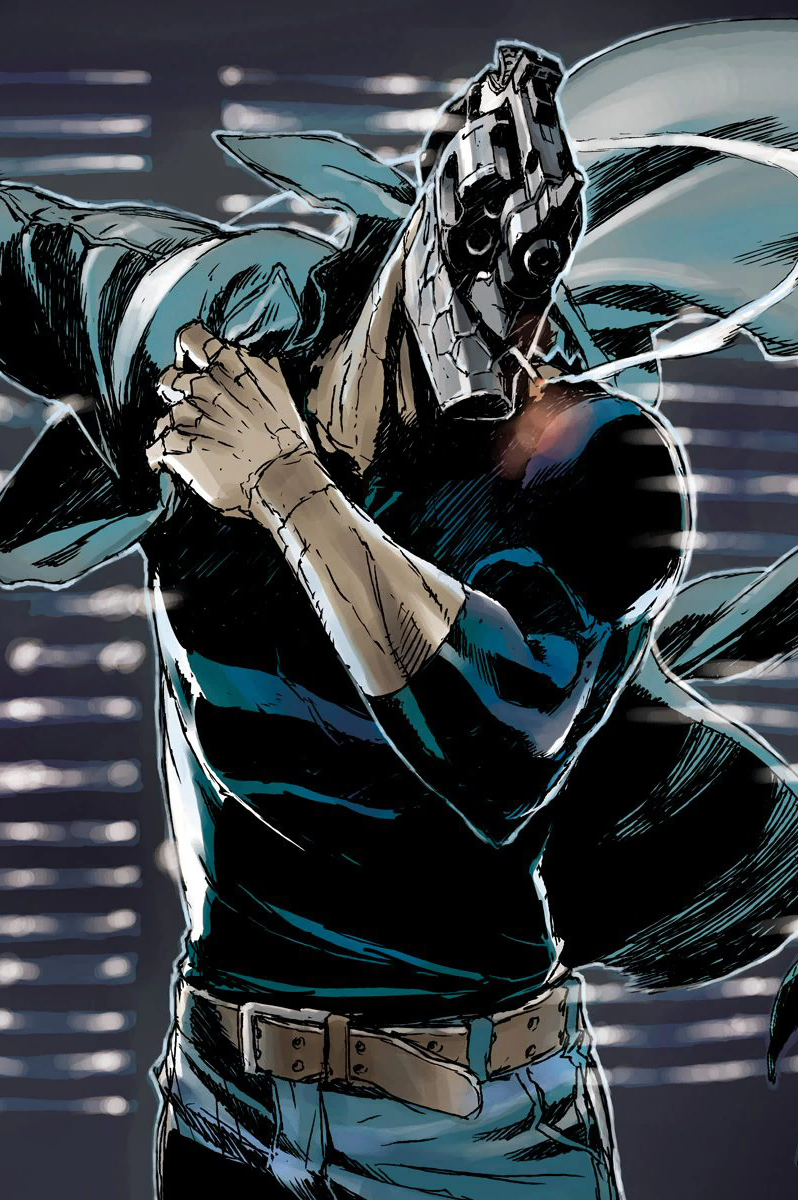 Blade of the Immotal's anime looks shocking, unfortunately. Also gonna cut out tons of the manga so it can wrap up 30 volumes in 24 episodes. lol.

Lol wtf is that anime

Is it even good?


One thing i really hope doesn't happen in AoT is that all these titans are just government experiments gone wrong. That'd be a shit reveal.

You guys ever read light novels? Been reading a couple over the past few months. Battle Royale, Haruhi Suzumiya, Another, Violet Evergarden.

I can see why Haruhi was such a huge hit. The light novels ae fantastic and the adaptations are great, especially the movie which covers the fourth book. Its a shame they have not adapted the remaining novels.

I've considered it from time to time, a lot of them are quite highly rated and a staggering amount of anime have been based on them but IDK, always had the impression I wouldn't enjoy them in novel form.

I have read few over the years.

I must say when I first read Battle Royale I absolutely hated it. I think i might have posted it here too actually back in 2014. Thought it was unnecessary long and most of the characters sucked.

But 5 years later i think it is fantastic. Maybe it's because i didn't understand it as well but you can see why it was genre defining.

I don't like how often they retcon. It's a cheap way to force a twist. However it was a solid season overall. Some of the moments were insane. Specially in the last episode.

what got retconned? dont remember

dat Reiner and Bertholdt twist, Reiner's my fav char in the series so it was a wtf moment

The Reiner and bertholdt twist is what i am talking about. Along with how everyone seems to be a secret titan all of a sudden lol.

Maybe the execution was done really poorly but my reaction was "you can't be serious" rather than WTF. Then the flashback during it where "they is from the same village as annie"

Reiner was my top 3 character too but that twist felt really forced. Specially when they eventually said "he is in two minds now" lol.

But maybe season 3 will reveal something which will add up.

That final reveal of Eren was really amazing though. Also the arm chopping of captain erwin was GOAT ffs. Was in tears when he said Forward with his other arm. Incredible character.

I must say all the reveal was done really nicely. The questions kept getting answered satisfyingly which is rare. Although i do think the first half of S3 was dragged a bit too long but it did give us Kenny.

Not sure how it will end.

Also. Erwin is the GOAT character. Best in the series. He has 2 of the greatest moments in the show ffs. Was in tears at his charges.

one of the greatest performance in anime history

Crows-Worst-QP manga is so good. My first delinquent experience. Its basically shonen with high school gangs. Crows was my favorite because it had the better characters but I think Worst had the better storyline. QP is more mature but it ended pretty abruptly. Highly recommended if you can look past the cheesiness and OP protagonist. Its also a bit repetitive too tbh.

@RealGunner wrote:lol the cheesiness in Worst is so OTT that it seems intentional

Did you read Crows?

I think about 10-15 chapters yearssssss ago but i didn't like it so stopped.


Firenze probably loves it. It's his type

I actually started with Worst (as did a lot of people, because Worst was translated before Crows)

CxW is also massive in Japan, think Takahashi Hiroshi has sold 90M copies of manga, but not really popular in the West. Delinquent stuff is niche.

Worst isn't even cheesy. I actually liked it because it was a realistic depiction of delinquency (for the most part) and relatable on some levels.

I prefer Worst over Crows because the plot is better and I thought the overall character development is better. Whereas Crows is mostly about the MC, Worst gives shine to the entire town and its factions.

Hiroshi has a series that recently got picked up @M99 called Jank Runk family. I read it, but it's definitely something he's just doing for banter, it's basically Mad Max (with delinquents.) He is basically the Echiro Oda for Akita Shoten (a rival to weekly shounen jump) so the owners begged him to make manga for sales lol. Jank Runk isn't great.

I highly recommend reading all of the CxW gaidens if you didn't already, and also the QP gaiden. Has some development in there for like how The Front of Armament was founded, Bouya and Zetton in middle school, etc.

I got a couple good recommendations for you though if you liked those, but it could get a little repetitive reading the same sort of things.

First up is Clover, now this is basically CxW, but it's fucking enjoyable. It's by another TH, Tetsuhiro Hirakawa. Funnily enough, he works for the same publisher and handled what Takahashi Hiroshi considers the best CxW related spinoff (Crows Zero 2, the manga adaptation of the movie (both Crows Zero and Crows Zero 2 are canon and original movies and well worth watching btw)

Oddly, just like Crows, Clover's art starts out shit but then eventually becomes what I consider to be the best art I have ever seen for a weekly series (It finished back in 2015)

This may sell you on it btw

Again, it's very, very similar to CxW, it's a shounen, but I think it has some arcs that live up to and even surpass stuff in CxW. I used to think the mangaka could have been a protege of Hiroshi's, but I think he just grew up reading CxW like a lot of delinquent authors.

and finally, we have my favourite current manga that's running.

OUT. It's a seinen and probably the best current delinquent series in Japan. It's very much a modern delinquent series though, so you get none of the cheesiness of older delinquent series. It's actually more akin to Yakuza stuff, but they're all in the 16-18 year old range. It's fucking amazing, but while it's good early on, it doesn't become one of the best series I've read until it reaches about the chapter 60 mark.

It releases every two weeks in Japan and is being actively translated, translations are about 10 chapters behind. I like it so much I actually buy the raws. Has some of the best twists and fights I've read in Manga, period. And a level of moral ambiguity I'm not used to seeing in delinquent stuff, you'll honestly not know who to get behind, the main gang in the series or their rivals, who appear later in the series.

The author is a massive movie buff and you can feel a lot of Tarantino in him. One character is even an ode to Samuel Jackson from that movie. Also feature Black guys and does them justice. Not just gimmicky like a lot of other races in manga.

I need you to get into this asap btw. Although, these guys are like future Yakuza and it can get a little wacky later on. Not too absurd, but there's a level of violence that is akin to Berserk at times. But it handles it well.

I'm holding off on rating it but if it continues to deliver, it'll likely end up my favourite manga ever. I want to post some amazing panels to sell you on it, but the series is so twist heavy it'll probably spoil something for you later.

Yeah. I've read all the gaiden except the ones that have not been translated (Rindaman, Birth Of Housen, Manji Family). Also watched all three movies before even reading Crows. Followed the whole series chronologically.

Agree on Worst having the better story. It had as much focus on Armament as it did on Suzuran. I can see why author used a different name as the title Crows refers to Suzuran and the manga focused on the whole town. But still it was mainly Armament and a bit of Housen, I wish Sera and his school had more screen time and development.

But I still liked Crows better because of the character. Bouya, Ebizuka Trio, Rindaman, Yasu>>>>>>almost everyone in Worst. I did not care about the Worst characters like I did for the,. I think my fav character in Worst was Zetton and he is a Crows character. Even others like Bitou brothers, Bulldog, Ryuushin I felt were better than their Worst counterparts.

I actually had Clover and Out recommended to me. After asking around I've been recommended Clover, Out, GTO, Rainbow, and Angel Densetsu.

Page 37 of 40
Permissions in this forum:
You cannot reply to topics in this forum
Latest topics
» 2021/2022 Premier League Discussion

Today at 4:33 pm by Robespierre

» Donnarumma makes his fortune at PSG