I was playing it over christmas and i disliked the mission scructure/design tbh, most of it is unavoidable due to how it's mostly set ups for heists and you can't really get around that.

Of course the Heists make it all worthwhile so you get the pay off in the end.

Agree on the open world comment though, it's amazing and to be frank i don't even think the non-RPG qualifier is necessary. Really fail to think of an open world which matches it in terms if it's world and structure which isn't meaningless bullshit.

Phritz wrote:Indie can never disappoint because indie doesn't market out the ass.

Did GL ever catch on to Bastion and Transistor?

I played both. Transistor's combat system got repetitive towards the end of the game, and it was the sole reason why I didn't manage to motivate myself to play through the game a second time. Atmosphere-wise it's GOAT, though and I personally loved the music and art style. I thought the story was interesting, and I think they concluded it in a satisfying way. Bastion was good too, but not quite as good as Transistor, in my opinion.

got transistor through PS+ a while back, been meaning to start 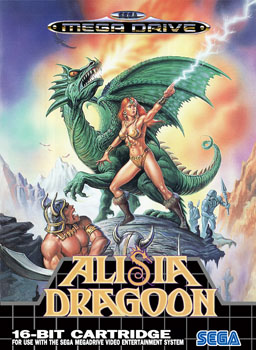 As an action platformer, Alisia Dragoon suffers from its gameplay limitations. However, in general, its aesthetic and overall experience makes it a good game.

Not without its problems, this is a game that is worth the plunge despite its shortcomings.

"Once again, the silver star fell from the sky bringing death and destruction"

Surprisingly for an Action Platformer of its time, Alisia Dragoon actually bothers to provide a story. As Alisia, you are going to go through 8 stages in order to stop the revival of some ancient evil. It is of course nothing special, but its nice to have.

In design, the game offers a mixture of high fantasy elements along with some high technology.

Its consistent, and the graphics tell the story of the sorceress Alisia going into an adventure to stop that ancient evil.

"Do you dare to challenge us?"

The action in Alisia Dragoon is somewhat strange. I don't know if you can call it a shooter, but her main and only form of attack involves shooting a stream of electricity from her hands. The catch is that the electricity streams automatically home in to enemies. This means there is limited action from the player in directing their attacks.

Another thing Alisia can do is summon one of four monsters to help her out. These monsters each attack in different ways, and they have their own health. Similar to the standard attacks, there is little control over how the monster behave.

With such little control over your own attacks, the main thing you will be doing is resource managing your electricity gauge (you can't shoot for ever), and trying to dodge enemy attack. This is easier said than done though, because the screen is often chaotic, and in some boss battles, dodging enemy attacks is like playing a bullet hell game with a seriously large target.

Thankfully, there are a bunch of healing items strewn about, and the earlier stages are not that challenging. Unfortunately, that is not enough in later stages, where you will feel the difficulty ramps up considerably. Worse yet, if you lose, you repeat the stage from the beginning, and there are no save options.

"Your life will make an excellent sacrafise"

Game arts are the studio behind the amazing looking Lunar games, and Gainax were known for their graphics back in the day. This clearly shows in Alisia Dragoon, because it is actually a fairly beautiful game.

While the character sprites are not anything special, they are well-animated, and varied. It is the background that steals the show. With 8 stages, each looking very different, yet are believable in a s single world. There is an excellent balance between the foreground, and the background, where you can see a lot of effort went in.

Best yet, is the fact that the game didn't rest on its laurels. In one stage, the game has you diagonally exploring a destroyed complex. It is something I rarely seen before, and it is done really well visually.

In sound, the main tracks are all really good. Its an overall solid soundtrack, especially in some stages. While I wasn't a big fan of the regular boss battle music, the final battle at least made up a little for it. Also, the sound effects were not complete garbage, as they are in many Genesis games.

Many might actually enjoy the limited involvement in the core action of the game. It leaves them focusing more on dodging attacks, than dishing them out. And that's a fair point to make. However, I found it to detract from the overall experience.

Still, this is one pretty game, and with a design such as that, I was okay simply pressing the attack button and prancing around dodging projectiles.

"Tips"
1- Focus on dodging enemy attacks.
2- Explore the levels to find health and power-ups.
3- Switch monsters before their health depletes, or they lose all their level-ups.

So, this was supposed to be a review of the Beat 'em up, Splatterhouse 3, but I simply cannot get into that genre at all. I tried, and I didn't not find any enjoyment out of it. Instead, I reviewed this game at a request from a Dtoid poster, and it was nice enough game.


Next game should be Phantasy Star III at #79 in the list, but I like to review game series in order. So I am going to jump ahead in the list and review Phantasy Star II which is at #67. Then, I will review PSIII later when I officially reach #67.
Stay Tuned

Any news on dlc for BF moal?

Shaq getting butthurt is something I've never seen before.

Heavy Rain is coming out on ps4? lmfao why?

Think it's coming with B2S

Those graphics must look great on ps4 though.


not sure i can be bothered playing it again eventhough i loved it.

Not interested in any of them outside Uncharted lol.

Out of that list, IUncharted, ME anf Firewatch for me

Is it safe to assume we will never get games as hard as Brood War and Melee ever again?

Firenze we need a pic of your collection (:

Some of these characters are such douchebags lmao.

Some of these characters are such douchebags lmao.

well yeah, they're all teenage caricatures

let me know what u think once u finish it though, great experience imo

The man in charge of the regional Rockstar studio long credited with handling the bulk of development for the Grand Theft Auto games is no longer at the company, Rockstar confirmed to Kotaku today. The company said Rockstar North studio head Leslie Benzies had been on sabbatical for the past 17 months.

Rockstar North has had a less GTA-centric role in the past decade, as they and other regional Rockstar studios have been credited with sharing the work on the company’s major games, including the seemingly all-hands-on-deck 2013 GTA V.

what does that mean

Found it interesting because he's been the main guy behind everything they do and wonder if that's why they have just been pumping out Online DLC for GTA and nothing else.

Phritz wrote:Is it safe to assume we will never get games as hard as Brood War and Melee ever again?

Did you do the target practice on R&D platform in MGS5?

Page 38 of 40
Permissions in this forum:
You cannot reply to topics in this forum
Latest topics
»  USA Gun Violence & Police Brutality Thread