@Robespierre wrote:For me the most boring this of modern football is that all the best players/coaches etc go on the usual 3-4 clubs .. Real,PSG,Barca,Bayern ... I miss the old good days when Batistuta played for the Fiorentina..
so I don't get who feels disappointment for this transfer .I am a fan of this transfer, it's a good thing for the football when a great player/coach wants to take a challenge, , instead of having everything spoon-fed, choosing to not go  into the usual clubs but trying  to build something of  great on  other great clubs but impoverished now . It is a good thing for the football if clubs as Liverpool, Milan,Inter etc come back to be great strenghts.   Personally who chooses to go the other way   has my full support.

Took the words from my mouth. I was going to make a thread about this

@rwo power wrote:Kloppo took the first jibe at Mourinho in the presser - he said "I'm the normal one" XD

FFS. My loyalty to Arsenal has never been tested so much.

It's really interesting and nice to watch his first interview on LFC TV if you have the subscription. Obviously most of the things that he's going to say are positive, but he just seems very genuine in what he is saying it's not measured or calculated and it doesn't seem scripted.

- One of the best moments of his life
- He always thought about working in England as a manager for the culture around football there, and Liverpool was his first choice
- When asked if it was an easy decision he starts off saying it wasn't that hard, but that he needed the 4 months off that he took after the hard last year in Dortmund because he's been managing for 15 years straight and he needed to relax and get a fresh perspective
- Anfield is the most special stadium he's been to to him
- He loves football and its an amazing game because of the fans, so its very important to him to be connected to the fans, and its his job as a manager to help people forget their problems and enjoy what they are seeing
- He doesn't think that he has to "adapt" to English football...it's only football, everybody plays the same game they all have the same rules and he's seen lots of English teams play and he's played against them
- He thinks it's important to play the game from the heart and the head and he thinks it's very important for it to be easy for the players to understand what you want from them
- Considers the job the most interesting one in the world right now because of the expectations but nobody seems satisfied
- He believes in the potential of the team, he doesn't want Ronaldo or Messi...he wants the guys that are on the team
- Believes in building his team and the way he wants to play the most important thing first is being able to play defence, your team can be most confident in play if they are not worried about every attacking move of the opposition becoming a goal (though he admires teams that play possession based)
- Klopp is fine with the way the transfer committee is set up because he has first and last say, doesn't want to keep players that don't want to be there because he has to work with these guys every day, and he doesn't want to spend money he doesn't have...discussions with FSG are very healthy and great
- Bringing his backroom staff
- His message to Liverpool supporters: "We have to change from doubter, to believer...now"

This should be interesting.

He still has a squad riddled full of Rodgers' scrubs. Gonna need at least 2 years before he can implement his stamp on the team and have them competing for top 4 or beyond.

Saying that though, he'll have this Liverpool team fairing better than they currently were under Rodgers ( I miss him

I am ecstatic that they appointed him

I really hope klopp does well. and not for obvious reasons but he is such a nice guy that you cant help but like.

he said he has the first and last word on transfers and the committee sort out everything in the middle I'm very happy with that. that's exactly how I think transfers should work.
_________________ 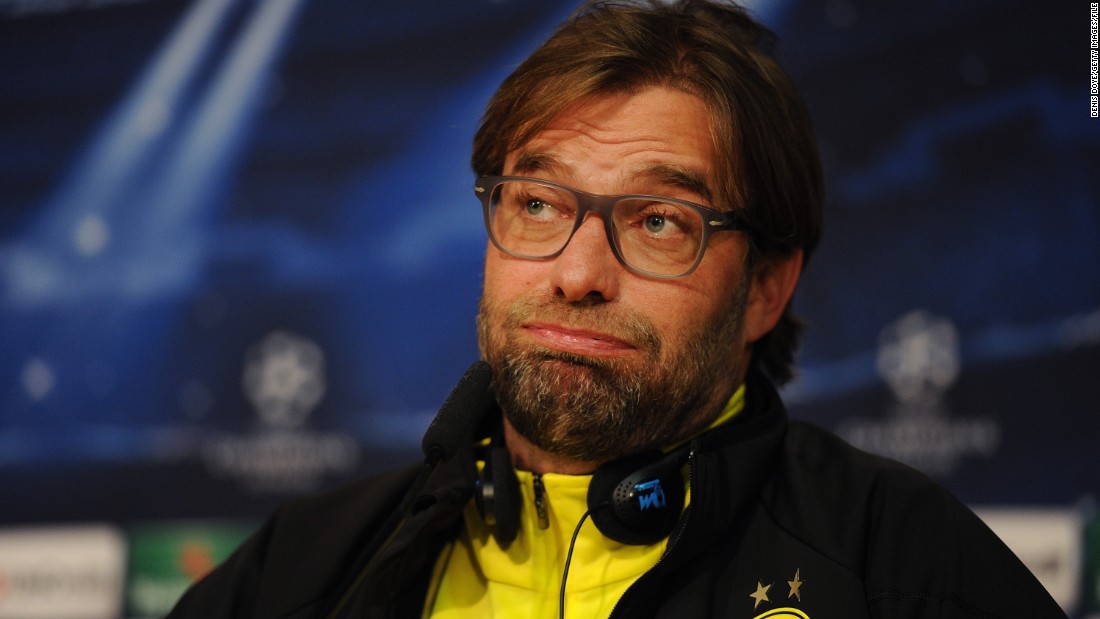 Klopp: "First time I came here (with Dortmund) I wondered what it would be like (to manage this club). I am a lucky guy."

god I love this guy.

The man's a Liverpool fan. He was like overflowing with happiness during that press conference. Fair play to the scouse. Got yourself a classy manager.
Yea and he seems a really nice guy too.

I love him and will gladly have his babies ....what an inspiring individual

Klopp's Dortmund took on Mourinho's Real Madrid four times in the Champions League in the 2012/13 season. It was Klopp who got the better of the Chelsea boss, topping their group and later eliminating Real from the competition. He also seemed to get under Mourinho's skin. "I have said a little bit about Dortmund and that's enough," said the Portuguese coach before their last-four meeting. "Since the day of the draw, Klopp talks every day." The BVB boss was unconcerned. "Mourinho says I speak too much? That's what one of my teachers used to tell me. I don't care, I don't think about this." Asked whether this was mind games, Klopp added: "I'm not intelligent enough to understand what it should be. But it's no problem, now I'll shut up, and everything is okay." It was for Klopp. His Dortmund side beat Mourinho's Real in the Champions League semi-final with Robert Lewandowski's four goals in the first leg blowing away the then nine-time champions.

What a cool guy. Maybe Liverpool will be watchable again.

I *bleep* LOOOOOOOVE this man so much.

@rwo power wrote:Kloppo took the first jibe at Mourinho in the presser - he said "I'm the normal one" XD

I think he was just being honest about himself. Did he ever took a 'jibe' at any opponent manager???

Honestly that interview was so sincere. None of the garbage cliches Rodgers was saying. God that guy was so full of himself. Classy humble Klopp

@Glory wrote:The man's a Liverpool fan. He was like overflowing with happiness during that press conference. Fair play to the scouse. Got yourself a classy manager.
Yea and he seems a really nice guy too.

@Glory wrote:The man's a Liverpool fan. He was like overflowing with happiness during that press conference. Fair play to the scouse. Got yourself a classy manager.
Yea and he seems a really nice guy too.

Page 6 of 19
Permissions in this forum:
You cannot reply to topics in this forum
Latest topics
» The Official Dwayne Wade <<<<<< you thread

Yesterday at 8:49 pm by Nishankly

Yesterday at 8:09 pm by RealGunner

Yesterday at 8:06 pm by RealGunner