I didn't realise we didn't have a thread for him until now.

Anyway, here is what Jose said about him after his last game:

Jose wrote:"Ruben is ready. He's very confident, very good self esteem, wants to play and is not afraid of anything. He's not ready from the tactical point of view."

"The tactical point of view is where to keep working, improving, kill him in Australia, the process is on the tactical and physical side."

"To play the other night like he did, after 77 minutes he had cramp. He's not ready in that side. Mentally is ready and if I played him tomorrow it would be no problem."

Sounds like he is just missing match fitness (which he has always lacked) and lacking some tactical knowledge. Both of which can be built up over the season much like Zouma last season.

Could have sworn we did have a thread for him ¬¬

I checked, we didn't.

Jose has stated that RLC will start against Villa.

Scored his first goal for England U-21

.@ChelseaFC midfielder @rubey_lcheek opens his account for the @england U21s with a sumptuous half-volley. http://t.co/1bLcMn9Nux

Chelsea are confident of signing academy graduate Ruben Loftus-Cheek to a new long-term contract before the end of the season, with an acceptance from both player and club that he now has the conditions to develop into a first-team regular at Stamford Bridge.
The 19-year-old who grew up in Lewisham scored his first senior goal for the club in the FA Cup third round against *bleep* on Sunday, having made his first appearance since the end of the Jose Mourinho regime. His current deal expires in the summer of next year and his situation has attracted interest from other Premier League clubs, as well as across Europe, when it looked like his progress had stalled at Chelsea.
The club believe that their close relationship with Loftus-Cheek and the opportunities that will open up for him in the next few months will make the new deal relatively straightforward to agree. The academy graduate, who looks like he could be the first to make the leap to first team status in a generation, is a favourite with supporters and is happy at the club.

Such was his promise that he commanded a premium deal for his first professional contract at 17 and he can expect another significant rise in return for a long-term, five-year commitment to the club. As a home-grown player, and given the relatively high levels of Chelsea’s wages, he can expect to move onto a weekly salary around the £40,000-a-week mark.
In terms of his technical ability, the club have no concerns about Loftus-Cheek. Previously there were worries about his consistency, with marked difference in the quality of his performance in training from one day to the next. It is accepted now that he needs a run of games to establish himself in the first team and it has not been easy coming in and out of the side, with only one league start all season, against Aston Villa, when he was substituted at half-time.
He has already been promoted permanently to Gareth Southgate’s England Under-21s squad for the Euro 2017 qualifying campaign, having made the squad for last summer’s tournament in the Czech Republic. Mourinho insisted that academy players could not be given any favours in terms of first team chances and while the club agreed, their former manager’s tough-love approach to Loftus-Cheek made a new contract less of a formality.

Roman Abramovich’s delighted reaction to Loftus-Cheek’s goal on Sunday showed just how eager the club are for Loftus-Cheek to succeed. He turns 20 this month and, unlike his peers in the Chelsea academy, he has never been on loan. Although he made his debut under Mourinho, the former manager chose not to select the teenager as results got worse, despite one notable threat after the defeat to Southampton to use the club’s young players.
Loftus-Cheek is represented by the Stellar agency, David Manasseh and Jonathan Barnett, who, negotiated Gareth Bale’s deal to Real Madrid in 2013. Loftus-Cheek has been at Chelsea since the age of eight, his arrival even pre-dating the Frank Arnesen years when the club’s academy went on an aggressive programme of recruitment under their Danish director of football.

Good news if it its true.

RLC wrote:"I do not think [Hiddink] sees me as a young academy player, I think he sees me as a first-team player who can help the team. But being a young player is hard at Chelsea as the facts state that not many young players come through. But I will stay mentally strong and I think that when the time is right to play me, Guus will know and I trust him as a manager."

"It has been a massive learning curve for me this season, as last season I came into the first team and we were winning every week, the atmosphere in the changing room was always jolly and lively. And then this season it has been a bit more different, so that is good for me to see both sides and how strong and close a team has to be to get back to winning ways."

Chelsea Football Club is delighted to announce Ruben Loftus-Cheek has signed a new contract until 2021.

The 20-year-old talented midfielder said: ‘I’m delighted to sign a new contract at Chelsea and my focus is on working hard in training every day in order to push on and establish myself in the team. It really means a lot because this shows the club believe in me so I’m really happy.

‘The club have done so much for me since I started here as an Under-8 and now I want to repay the faith they’ve shown in me with my performances on the pitch.’

Loftus-Cheek, who has so far made 13 appearances for the Blues, made his debut in a Champions League game against Sporting Lisbon in December 2014 and had his first taste of Premier League action a month later as a substitute in a 1-1 draw against Manchester City.

In February 2015 he was brought into the first-team squad on a permanent basis and made his first start in a home game against Liverpool towards the end of last season.

Loftus-Cheek, who has earned eight caps for England Under-21s, scored his maiden Chelsea goal in our FA Cup win over *bleep* United in January.

Meanwhile, under-21 squad defender Dion Conroy has also signed a new contract until 2018.

The 20-year-old defender was part of our Academy teams which won the Under-21 Premier League and FA Youth Cup in 2013/14.

Great news, hopefully we see more of him in the coming weeks.

The lad is blue, through and through

Also, this quote is floating around.

Hiddink wrote: There will be chances for RLC to play in the next few games. We have analysed his game for him, we're working with him on a plan.

That's what he always says

Let's hope he eventually stays true to his word.

Scored his first EPL goal for us against Villa

May it be the first of many! 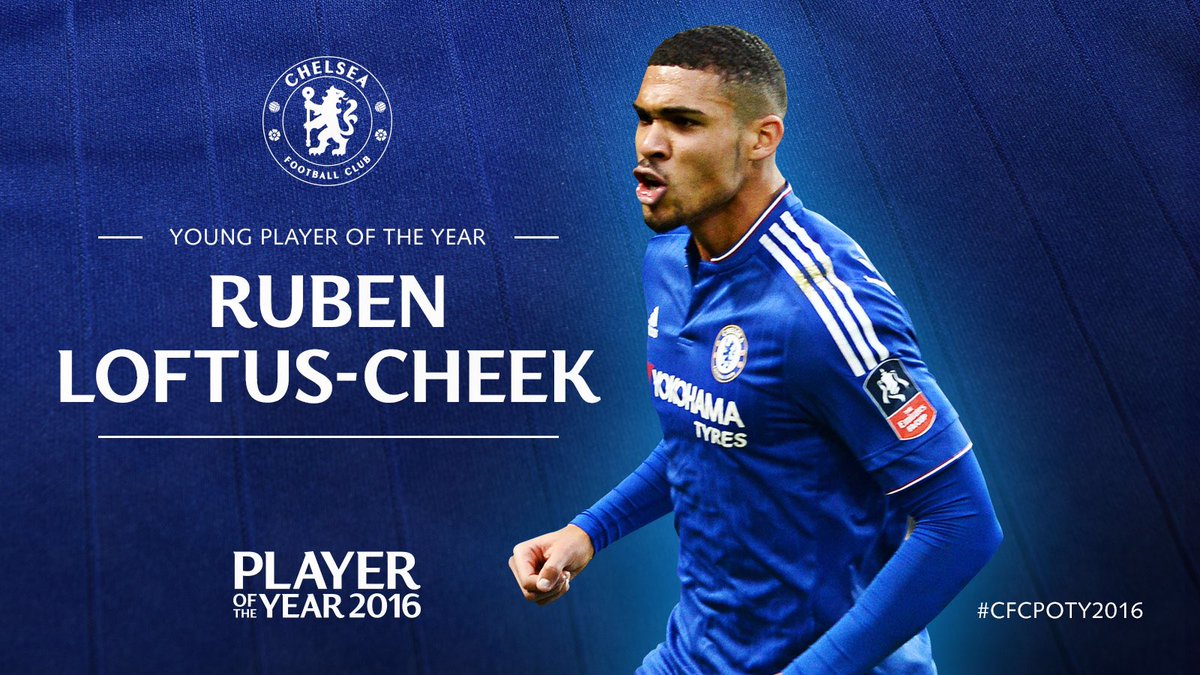 Tantamount to the year Ake won it, merely for having made a single brief first-team cameo in a pointless game.

Actually scratch that. With your post in the Youth section, I see the club is now distinguishing Young Player of the Year from Academy Player of the Year. I'm pretty sure it used to be that the Young Player covered both all academy players as well as youngsters involved with the first team. Makes sense for RLC to win it then. 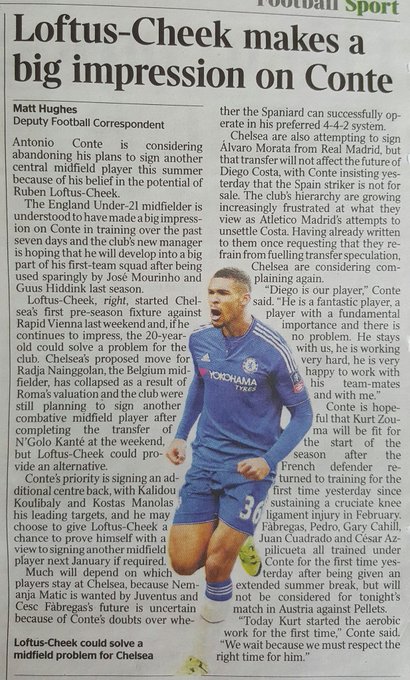 Conte wrote:Ruben is young with great potential. I like him a lot in the position of striker. He can improve a lot because he has great potential, good technique, good personality and he is good one v one. It's normal he can improve and normal too that Chalobah and Aina can improve. Aina is showing the Academy is a good school and it is very important for the club. If I can count on these players it's a new source for me."

Interesting. Could RLC be our 4th choice CM and CF?