How about not signing long term contracts then? Good for Nasser  for sticking to his guns.
Verratti has no leverage here, play for the team or spend a world cup year with the reserves.

verratti has started to change his tune, he knows he wont go anywhere. he will accept another extension from PSG and another pay increase. like every summer...

Like clockwork, hopefully this is the time where the majority of GL learns it's lesson that they won't sell players they don't want to sell.

I doubt it but maybe there's hope.

Never really bought that he will join Barca tbh. As a Barca fan hoping that he will play for us is like hoping Jon snow would bang Sansa, all you can do is fap about it and am past that phase.

why do so many people think Bellerin is barca level? i dont get it

Mr Nick09 wrote:why do so many people think Bellerin is barca level? i dont get it

After his first season it looked like maybe, but I agree now. Definitely not.

Don't take his post injury form seriously. He played majority of 2nd half of the season with ankle pain. He is fine now though. Should be back to his best next season. 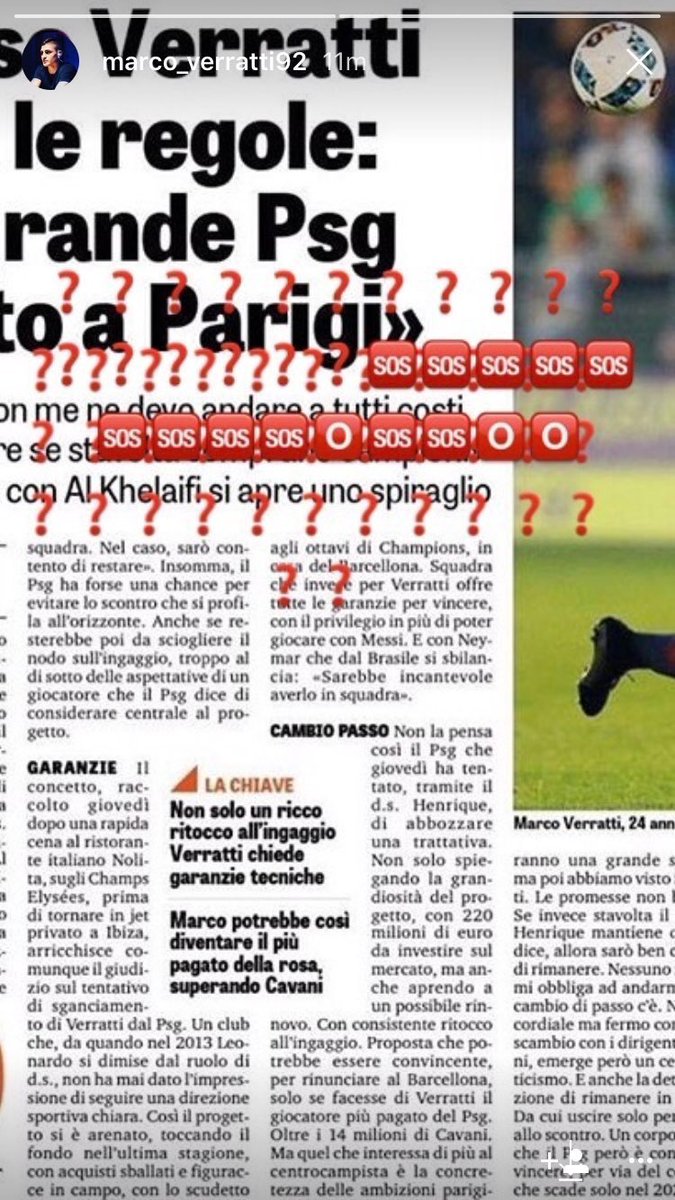 Verratti hasn't taken part in the training session with PSG today. The player is in Paris and is determined to join Barcelona #fcblive [md]

As if that's going to work lol.  PSG will just put him with the youth team like they did others...  Thiaggo Motta a couple of years back to be exact.

They don't care about money.

If Verratti really wants to force a move, he will, i think you are underestimating player's clout

Honestly, the ball is firmly in PSG court. Verratti is on a long term deal (and from my understanding, he is being paid handsomely too) with no release clause we know of. This is the one time I can't see player power making any real difference.

i've been trying to stay off transfers for a bit, and still enjoy duodecima (yeah i said it), but this talk of a club waiting for a player to miss training is the height of disrespect to the club as well as the player. so i guess they should be cool when players miss training because they want a wage increase.

just put forward a higher bid (pogba type money maybe) and at some point if its good enough for psg to get worthy replacements they might buck. besides, i don't see the need for verratti when you've got andre gomes.

The ball has always been in the court of whomever is on the right end of the contract.

What it really comes down to, as it always does, is money.

When a player is near the end of their contract, a club will almost always undoubtedly receive a lower return or risk receiving nothing for a player and watch them leave on a free.

On the flip side, earlier in the term, the club holds the power and can command a higher fee (not inclusive of release clauses).

However, if a player wants to leave and is willing to throw a public fit then it could still be to the club's advantage to oblige and net a return.

For me, and mind you I'm a Juve fan so when there's even a hint of a player wanting to leave I quiver and in my head I'm like, "you ungrateful *bleep*. Marotta. Beppe. Sell this bitch". But this is because I've conditioned myself to think like this over the years. But for me, I'm pro-sell. It's business. Dont hemorrhage wages, don't lose millions, don't make one player bigger or equal to the team, don't rely on such players. Get them far away from your team. I'm probably the minority in that thought but for me it's as simple as that.

Money means nothing to PSG. They don't care. That's the point all of you are missing. They could offer him 200 mil and they wouldn't do it unless they wanted to.

It's like trying to buy a player from bayern. You can't.

It's all about keeping a proper image for QSG. Enthusiasts will call it "principles" while cynicals will call it "ego". On my part i'm more of the cynical type.

Their big project is stagnating and they looked clueless this year. Bad player management, losing the league, Remuntada... Verratti leaving is the icing on the cake. So QSG point of view is absolutely logical.

But the decision of putting him with the reserves ...mmm...

to me it seems like the worst result for both club & player
- Verratti loses crucial weeks of a World Cup season and wants to leave more than ever
- QSG keeps a world class midfielder in the city for some basic drills, jogging around with teenagers, instead of selling him and look forward to IMPROVEMENT.

I don't see how this would be a good move, now is the right time to wake up and accept reality, they have 2 months left. Surely the bianconeri dna has influence on my opinion.

sportsczy wrote:Money means nothing to PSG.  They don't care.  That's the point all of you are missing.  They could offer him 200 mil and they wouldn't do it unless they wanted to.

It's like trying to buy a player from bayern.  You can't.

at some point, it becomes a matter of common sense more than money

i've thought about Bayern and their categorical behavior the other day... i suspect a hidden clause in the contract of every player, with huge consequences in case of a Verrattiesque situation

Silva wanted to categorically leave for Barca two years back too and he was told flat no.  Same with Cavani wanting to leave.  Matuidi... the same as Juve fans well know.  Rabiot was sent to the youth club the season before last when he wanted to go to Roma. I can go on and on.

Carlo Ancelotti is the only one that was able to leave but that was due to a promise the Qatari ruler gave to him over the winter break.  It was a matter of keeping his word.

Rabiot was very young at that time, sending him in reserves was an acceptable decision. Not even close to being in the same dimension as current day Verratti.

To me it's stupid to waste a player like Verratti, but i understand your point as well.

Sirigu (Torino): "Barça target Verratti? You could say that Verratti is a little like a prisoner at PSG." [l'equipe]

disrespectful but coming from Sirigu it's not a surprised after the way PSG kicked him out.

Verratti signed a contract to stay in Paris, if he wants to leave he can wait for the end of his deal lol

Thats not disrespectful to say, they are actually holding him behind against his will. They have the right to do so but it's still kinda awkward.

It's not awkward because he is a PROFESSIONAL athlete, he signed a contract to play and as a professional his job is to respect his contract.

you make it sound like they forced him to go to PSG and to sign a new contract last summer, which by the way he has been doing since he joined them. Every summer, he goes to his boss offices, and ask for more money.

Is there even a tangible way of him leaving legally - without the club's consent - provided there are no clauses? Its a precarious situation, can something like buying out a contract happen? I.e. Verratti paying out his contract in full to the club

Today at 5:02 pm by BarrileteCosmico

Today at 4:05 pm by BarrileteCosmico

Today at 11:10 am by BarcaLearning