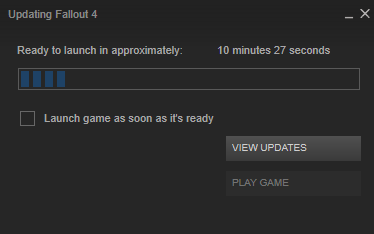 oh god; this game will consume me.

spent about 4 of those tinkering with my first settlement

feel like they've definitely improved the difficulty, game was a joke before on normal in F3 died a fair few times on it so far

gunplay is enjoyable when shooting manually now, reminds me a bit of borderlands

really haven't gotten too deep into it yet though, gonna be a really long game obviously

love the atmosphere and the game isn't ugly at all, just underwhelming compared to the the games we've played this year

that said it definitely feels exactly like older games besides the improved gunplay, can see why they hyped the settlement building thing (which is actually fun and quite deep, yet very user friendly) because it's the only real new feature

it hasn't wowed me like TW3 or Bloodborne had after that length of time played, but the signs are good so far and I've encountered 0 bugs yet which is always a good sign when playing a bethesda game

That was the impression I got from footage I watched, Borderlands gunplay is good enough for me tbh.

went with my real life name because I didn't expect them to have a bunch of names that weren't 'normal' like Snake or Akira, probably missed the option to change it now, oddly enough I don't remember anyone except the robot calling me by my name after 11 hours and that was twice max.

Yeah the name calling was overhyped way too much; unless Codsworth becomes important.

Watching along with 28 other people

Are there really big spoilers etc?

The settelment building is definitely minecraft-esque

Was that a prostitute?

He is too busy killing giant flies


Saw his dog run towards teh zombies before

I'm gonna like that dog, saw it knawing some dudes arm off

plus I need a break lol; went full ADHD on this game

I was laughing at the Death Claw part btw, get the feeling u wasn't supposed to be there

Played for about 3-4 hours last night and I think it's awesome so far. Edited Falloutprefs so I could get rid of the FPS cap and it looks amazing on Ultra.

One of the main complaints with those Meta reviews is people don't like the dialog system? I think it could be more descriptive but I like it.


The Pip Boy app is pretty cool, does everything your in game PB does

I wouldn't listen to metacritic user reviews tbh, most of them are highly critical or highly fanboyism lol.

I bet if you look at most games, the user reviews will be mainly mixed. You'll never please everyone.

Yep pretty much that


In the end you decide yourself if you like it or not lol.

Out of curiosity i looked at Witcher 3 and MGSV user reviews and they are 8.9 and 8.1 respectively lol.

Critics get a lot of crap ( rightly so tbh) but in general they get it right more often than the general public does.

'The Talos Principle (Deluxe Edition)' never heard of this.


User scores are definitely odd for fallout 4. I can definitely say userscore does not give the right feedback for Destiny :TTK since it's been universally praised even by the critics who thought the first two DLC were underwhelming.

Userscore on BO3 is right though

Divinity is a top down RPG, it's apparently very good. Although top down RPGs are not really my thing.