Moment of truth guys moment of truth. Atleti do not look good right now and will no doubt PTB against us. Mandzukic will continue his operation try and get our players sent off. Very wary of Griezmann and Arda who are tricky players who could really hurt us.

Doubts: Modric (he will have the scan today), Coentrao (is he ever available) and Benzema
Definitely out: Bale (injury) and Marcelo (suspension)

The Bale absence is a blessing in disguise as this will force us to play with an extra midfielder which will mean less loss of posession and more control of the game. I think we can live without Modric for that game but having Benzema is vital because that will mean we will only have one player who loses the ball alot and not two this will make it frustrating for Atleti who will hopefully crumble and let us beat them

In terms of defence with Marcelo out we would need Coentrao but god knows where he is. I wouldn't mind seeing Varane but he will most probably partner Ramos in defenfe which is weird because Pepe is our best defender but I can understand if Carlo does not want to change too much from the first leg

The only other concern is whether Illarra can step up. He had an excellent game against Malaga but they aren't as brutal as Atleti. He will need to be on his toes for that game

Apart from that they have Mario Suarez missing but will probably just play Tiago instead so no quality lost there.

Probable line up with Benz but without Modric:

Predict a 2-1 win in our favour

Modric out for 6 weeks or so, sprained a ligament in his right now

This match is a massive game changer for Carlo, time for him to put an end to his woeful record against Atletico.

No Luka.
Bale may still make it.

I hope we go 4-4-2. Hope to see Illara in for Bale, rather than Isco as his pressing has been off for a few weeks now.
2-1 either way. Too tight to call this.
Going to be s###ing bricks till Wednesday.
_________________
"Goals are like ketchup, sometimes as much as you try, they don't come out, and then they come all of a sudden.'' Ruud van Nistelrooy to Gonzalo Higuain 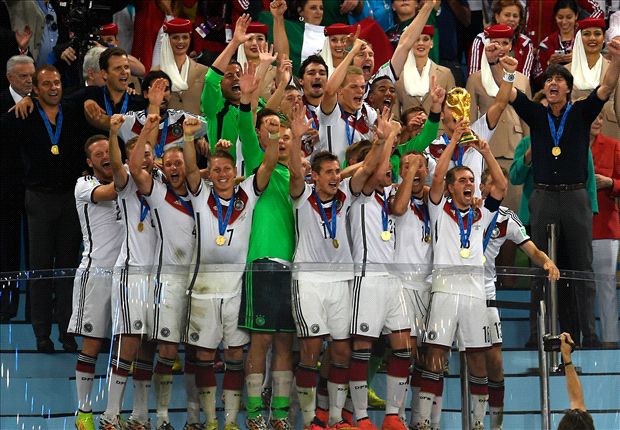 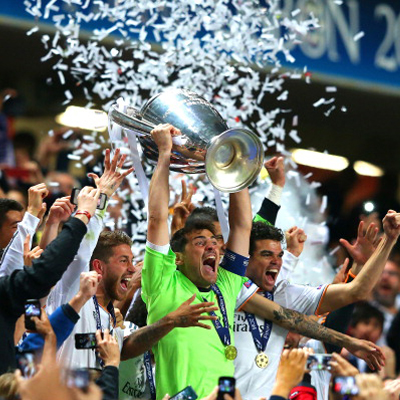 Modric is a very big loss but considering the fact that its a match against atletico where the same midfield and attack has brought nothing but draws and losses, then I think a rejig would be the perfect solution.

If we compare the demerits of losing modric to the gains of losing bale, I think we still have a higher chance.
No bale is like saying we will finally play with 11 players..
Anyone but bale would do. Without bale, we now have a 60% chance.

I predict atletico coming out in full force in the first 15-20mins and probably scoring a goal.
Then we equalize, they score another and we score 2 after.
Varane or Ramos header
Benzema goal and I can't predict the last scorer.
Probably ramos.

So many, multiple problems have arisen with Modric's injury and Marcelo's suspension:

1. Jesé and Chicha can't start, or at least not until we've wrapped up the game. If either one starts, with Benzema most likely to make it in time, a midfielder spot will be sacrificed.

2. I'm really afraid Carlo may choose Khedira for this one. I've always thought Illarra is not good enough, but I'd choose him over that brainless simpleton any day.

From the looks of it, our best possible lineup given the circumstances is: 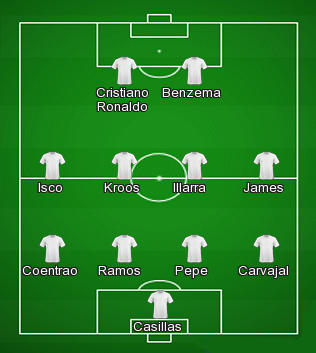 I'd choose Varane for this one, but Carlo will most likely bench him. Still, I hope he brings him later on when one of our CBs is having a bad day. Illarra should also be subbed off if he's having a bad game. I wouldn't mind Khedira in that case.
_________________
I ****ing hate Komodo dragons

I think having Lucas Silva is somewhat of a relief for me because we can bring him to get some steel if our midfield is being overrun. I dont share your pessimism about Illarra tbh, I think he is a very capable player who can keep posession very well and defend excellently. He might look abit like a push over and shown that he lacks in forward passes but against Malaga I think he put these doubts to bed but then again he won't have as much pressure in laliga home games like he would in a cl quarterfinal so we will see

According to Carlo Benz should be alright and Coentrao was training with the team today. That leaves only Modric as a huge loss. I think we can live with Coentrao to deputize this game, I would've been more worried if Marcelo was out for longer

Still the most important thing is that we will play with 4 very capable midfielders. I just hope the front two turn up this game especially Benz who has looked underwhelming in recent derby games

When I first saw Illarra I thought he's one rough-cut diamond ready to be honed in the mould of Xabi . Later on I was disappointed for the very reasons you've pointed out:

1. A pushover: He doesn't make his presence felt in midfield.
2. Inaccurate long passer, shy and indecisive player, afraid to lose the ball so he plays it safe and never dares to go all out like Modric does: he always tends to make short passes to whoever is closest to him, instead of trying to look for loopholes.

Not only this, he also pales in comparison to Modric, offensively and defensively speaking. There's a reason to why we struggled so much when Modric was out. He came back and breathed life into our lackluster team.

Last night, however, Illarra did a very good job. If he could just replicate the same performance against Atlético, we might very well have a decent chance of going through.

I hope he's going to make me eat my words on Wednesday. This is his last chance to prove his worth. He either takes it and displace Modric, or blows it and gets sold in the summer.

Hmm nope. I've tried believe me I have but I have 0% faith in Illara.

I'm actually worried if he starts against Atl.
This is where I'd usually say "I hope he proves me wrong" but thing is that I've lost count on how many times I've said it for him.

same old nonsense of trying to make illarra out to be awful because he is not hyped, instead of whats happening on the pitch, but then again you are the same guys who thought isco was great at cm because isco disco

I'd love to see Illara prove me wrong, start on against Atl, and have the game of his career. It won't happen.

Looks like Benzema won't make it after all. Here's how I would personally go: 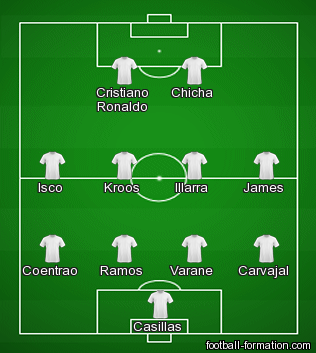 I would rather bench Ramos and play Pepe, but Varane isn't that good playing as a LCB.

As for our frontline: The reason why I chose Chicha over Jesé is because:

1. Even though Jesé is faster and better at dribbling and shooting than Chicha, the latter is better at heading and game reading.

2. In order for Jesé to do all of the things mentioned above (dribbling, cutting from the wings, shooting, ...) he'll need space, which won't be given to him by Atlético. Chicha has a better chance of scoring against Bus-parking teams than Jesé.

Having said that, I'd definitely introduce Jesé in the second half in case Chicha is flopping.

Here's how Carlo will go: 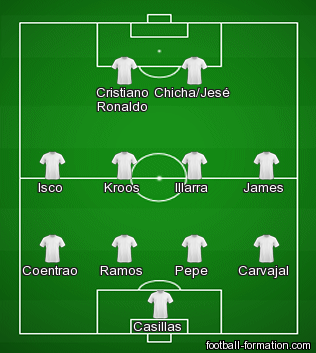 I have a feeling though that Carlo will play Khedira instead of Illarra. I hope I'm wrong. I don't trust Illarra, but he's a much better option than Khedira.

For me the best option to replace Benz is certainly Hernandez. As has already been mentioned, his poaching skills are more valuable than Jese's pace in a match like this. He also is on pretty decent form based on the past few games. What's more is that Benz has been incredibly ineffective vs Atleti this season and Chich could be an interesting wild card.

As if losing Marcelo was considered a big deal, the only player that would have been more detrimental was of course Lukita. His presence will be significantly missed.

Isco and Illara/Khedira/Silva will have to step up. We know Isco will play, and I personally am hoping it will be Illara who gets called up, but honestly this one is a toss up. And if I'm being completely honest, I don't have faith in any of Illara, Sami or Lucas Silva. I would probably choose Illara if I were Carlo as he is not as headless/ineffective as Sami but also has a little more relevant experience as opposed to Silva.

That gave me cancer...

Anyhows what about an untested 352

It's a good idea actually. That would give us a hedgehog of a defense at the back and we could also have one of the three CBs move further up the pitch in midfield.
_________________
I ****ing hate Komodo dragons

Club confirmed Benzema is officially out today. We already knew to be fair but now it's official. Vamanos Chicharito!

A lot of people discussing this online and throwing it in the mix as an option. Certainly feasible but it is too much of a wildcard for me. Pepe as a destroyer in the 4 clasicos when Mou was coaching had it's positives and negatives.

Carlo already came out and said we will not change any tactics, so we can expect Chich, maybe Jese, James, Isco and probably Illara to fill in for Benz, Bale and Modric.

_________________
My name's unique and I've drunk more beer and banged more quiff and pissed more blood and stomped more ass that all of you numbnuts put together.