El Shaarawy wrote:Hmm, i'm guessing it'll have something to do with Dany and her dragons

Cersei: What will happen if they confess?
High Sparrow: They will receive the *episode name*

Side missions my ass. GTFO ES, elitedam and whoever said such atrocities.

Best *bleep* Game of Thrones episode ever. I'm breathless fam. That was one of the best (if not the best) fantasy tv sequences I've ever.

Jon Snow vs the Whitewalker

Honestly how the *bleep* is anyone going to defeat the white walkers. Can't believe there are people out there who still think is show is shit. 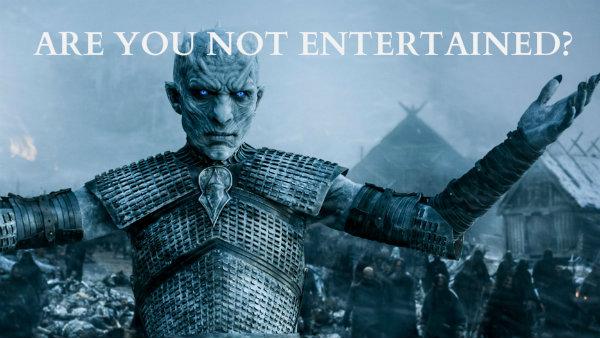 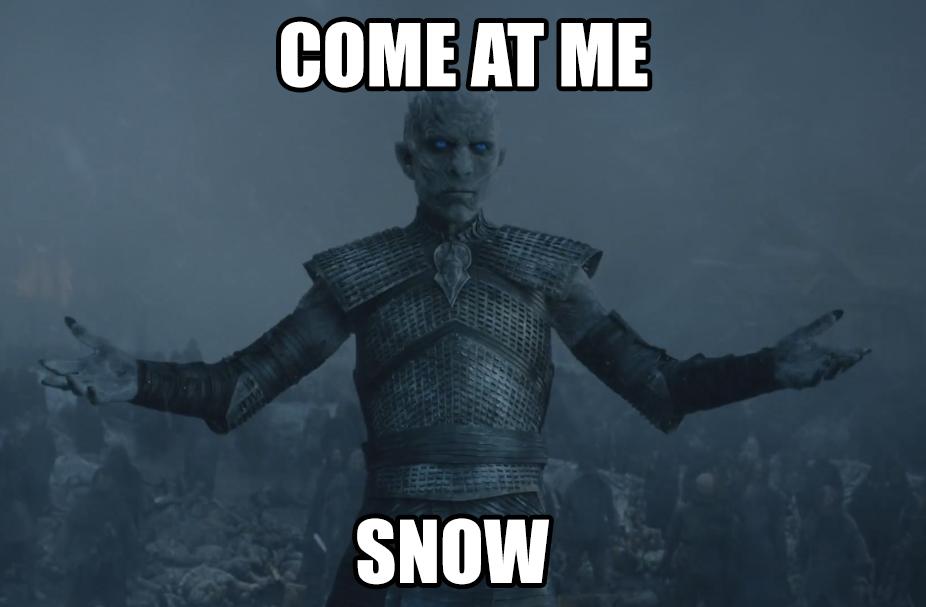 used to loathe jon but now I love him

The white walker was boss, he had me thinking jon better just commit suicide infront of him and end it, they look too strong.

So Valyrian steel also works against them, interesting

But yeah I'm with Mr-r34. I can't see how humanity can survive that. Ain't no way anybody can beat the White Walkers. Even if you get rid of the Wight's Army that they have, how on earth do you fight the White Walkers. Specially when the whole realm doesn't take you seriously about these.

Dragons are only way that I can possibly see this happening and even then 3 dragons ain't enough imo. Did you see how when the badass White Walker walked into the fiery room all of it froze.

Lol No wonder the Dorne sequences looked so amateurish and poverty. They were controlling costs for the real deal

And that Giant !! I dont think there is another character in the entire GOT universe where we this quickly become a fan of and start to root for, or if there is, this guy just bettered that with ease. Already a GOAT Got character ! Hope he wont die cheap. Walking through water like its nothing.

The whole episode was a breath of much needed fresh air actually. Characters in Hardhome with 10 or so minutes of screen time bossed over those entire lot present in Dorne.

Btw Qyburn is gonna be Cersei's only hope. Had a feeling it was going to be the case. It seems thats the way forward.

White Walkers are too OP.

If the Giant had gotten killed and turned into a Wight..

Yea he wasnt the same in those last few shots.

If he dies and becomes a wight then well...

White Walkers are too OP.

If the Giant had gotten killed and turned into a Wight..

It's not like he's the only giant to ever walk the world. I guess it's very likely they have some of them aswell.

Dragons seem like the obvious answer but don't forget Bran. He didn't travel that far north without reason.

GTFO RG, BC and whoever said it

Best episode this season and one of the best, if not, the best episode on GoT ffs. Jon with that epic speech inside the hut, main man ginger backing him up.
And omfg those white walkers. How the hell are they supposed to win against them

That White Walker boss was goat

@B-Mac wrote:White Walker with that Thug Life moment when he raises all the corpses and makes them his army

The *bleep* u looking at

And that wildling chick did better acting than Daenerys all season

Was a great minor character.

I'll talk more later, I need a few hours to calm down.

Agree with you guys, they look unstoppable. That ending with the Night's king raising his hands and in turn raising the dead - FFS that will go down in tv history, that was just hair-raising stuff, absolutely beautiful.

Lmao at nobody rowing that last boat, just staring and being struck with complete awe.

Obviously Hardhome was the ultimate shit of this episode, but Arya's arc continues to go forward with fascination and intrigue, even if it is baby step by baby step.

The cheekiness in that "Jon always comes back" line by Samwell. When the WW owned Jon I was so worried, but I knew they couldn't kill off another main character right there and then.

The giant was GOAT

Next two episodes also promises much with them titles, so I hopefully for our viewing pleasure it has the same badassery.

Again that was just

10 hours later and i'm still smacked by that EP, i was on the edge of my bed the whole battle.


Anyone have any tips for me if i'm wanting to read the books? Should i wait till the TV series is over, should i start now, what is life right?

-Oh Cersei, how far have you fallen
-Jorah 2nd time getting kicked out, its so heartaching to see what he's going through

-So Jon's Otataral Valyrian steel seems to work against the WW, very interesting.
-That last scene ended with a bang, even the hauntingly silent credits gave me goosebumps


So, the implications of the events at HH may lead Jon to believe that the Wildlings are not enough to challenge the WW, this could possibly give Jon the means to rally the the 7 kingdoms for his cause? Seems logical, but with the war for the throne on right now, it seems a nigh impossible task what with time drawing ever closer. Manufacturing of Dragon glass needs to be a priority for him now imo, so should be the secret to forging Valyrian steel. But that was lost a long time ago in the Doom of Valyria.

Also, if the WW assail most of whats beyond the wall, how are the Children of the forest concealing themselves from them. Could they be a key towards toppling the WW? WAT DID I JUST WATCH?!

Incredible episode, one of the best in all seasons in my opinion. Everything was good from Dany/Tyrion -> Arya/Lanna -> Cersei/Qyburn to Jon/Tormund/Night's King... especially the last 20 mins were creepy, frightening and funny (some really funny moments) at the same time.

- This show really knows how to build up tension before a battle and boy did they deliver.

- Jon's fight with the White Walker was fantastic and the theory about Valyrian Steel working against WW finally confirmed.
- I was sure Jon was going to die, but thankfully it didn't happen.
- The Night's King

- Wun Wun being more terrifying than a bunch of undead fighters/white walkers
- "The *bleep* are you looking at?" Wun Wun
- "I *bleep* hate Thenns" that Wildling Elder woman, was disappointed to see her die
- Tormund ruining the Lord of Bones lmfaooo

Favourite scenes (aside from anything Hardhome): Cersei in the dungeon

he will advise Tommen wisely.
- Disappointed not to see anything from the Tyrells and Littlefinger though.

but they will be crazy in GoT style for sure.

Hmm. She acted better than every other female character of this season I thought may be only second to Cersei.
But damn !

Anyway the way she died was kinda fair and justified. At least  it gave her dignity, especially after that scene where she puts her kids in the boats. It kinda made sense in a way.
Just a handful of minutes and still put in a memorable little performance. Props to her.