The FC Barcelona President Josep Maria Bartomeu has decided to terminate as of today the contract of the Club’s Director of Football, Andoni Zubizarreta.

The President, in the name of the Club, thanks Andoni Zubizarreta for his contribution, dedication and professionalism over the last four years in his role at the head of the Club’s football area.

FC Barcelona goalkeeper between 1986 and 1994, the man from Vitoria in the Basque Country returned to the Club in July 2010 to take up the role of Director of Football.

Saving Barca on and off the field, truly the GOAT of all GOATs

I guess someone's head had to roll after that transfer ban and Zubi's role makes him the main culprit right now, I guess.

If they replace him straight away, good luck to the guy who is going to be head of transfers with a year long transfer ban imposed on the club. A tough job.

Someone had to do something tbh

Joking aside, it's quite funny that exactly the next day after Messi has on the bench Zubi gets sacked

BAH GAWD, it doesn't even matter with a year long transfer ban but that imbecile not being on the pay roll anymore is already the best news of the year. Could only be topped if Fartomeu resigns on his own.

Smart decision. He doesn't want to be linked with the current sinking ship that is the Rosell/Bartomeu board. They'd only use his name and popularity for their campaign. He'll be back in 2016 under Laporta:

Puyol says in a Facebook message that he wants to do other things now, before hopefully returning to the club in the future. #fcblive


Collblanc wrote:He and Messi had a discussion earlier - Lucho benched him, and Messi doesnt approve. Didnt go to the after-game hospital check and didnt go to training. Showing Lucho who is boss.

Messi in FULL control on this one as well. A real little dictator. Calling the shots. Glad he took over. We'll see if he doesnt trust lucho as well or lucho had to listen to zubi to much 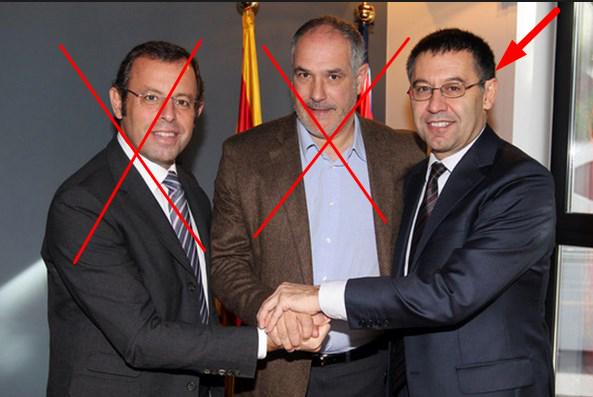 Fußball wrote:BAH GAWD, it doesn't even matter with a year long transfer ban but that imbecile not being on the pay roll anymore is already the best news of the year. Could only be topped if Fartomeu resigns on his own.

the funny thing is that, although with the transfer ban the sporting director hasn't much to do, Zubi will likely continue to be on the payroll ALONG WITH his successor

He will get a poverty compensation but it's the principle that counts.

What happened to Monchi?

He will come home once Laporta is back.

Pippo even if you put aside the transfer ban, who would want to take over under such an unpopular president? They would be replaced after the elections

alexjanosik getting his wish. DAT pressing once Suarez and Pedro lead the line.

Zubi was not the only one at fault. The whole board should have resigned. Typical Barcelona. Forever the architects of their own troubles.

Fußball wrote:He will come home once Laporta is back.

BarrileteCosmico wrote:Pippo even if you put aside the transfer ban, who would want to take over under such an unpopular president? They would be replaced after the elections

I remember reading that Monchi would be installed as the new sporting director if Agustí Benedito is elected as the new president. Who are the main candidates for the president role as of today?

Augusti, Laporta and Bartomeu as of right now

Barcelona have offered Sevilla sports director Monchi (46) to replace Zubizarreta, but Monchi has for now rejected the offer. [sport]

I feel like I should just follow @barcastuff and I would never need to ask questions about Barça again.

I thought Costa was the goat doe?

Seriously though he's following City as well it's all a bit meaningless.

Yeah no chance of it happening. He's way too good to be playing second fiddle to Hazard.

Page 1 of 3
Permissions in this forum:
You cannot reply to topics in this forum
Latest topics
» Cristiano Ronaldo is the GREATEST OF ALL TIME. Now Sit down and STFU