The Special One-ton: Mourinho spotted in Chinese food:
The face of Chelsea manager José Mourinho has been discovered on the bottom of a wonton in a Chelsea fan's Chinese takeaway ahead of his side's clash against Maribor
http://www.mirror.co.uk/sport/row-zed/special-wonton-mourinho-spotted-chinese-4579797 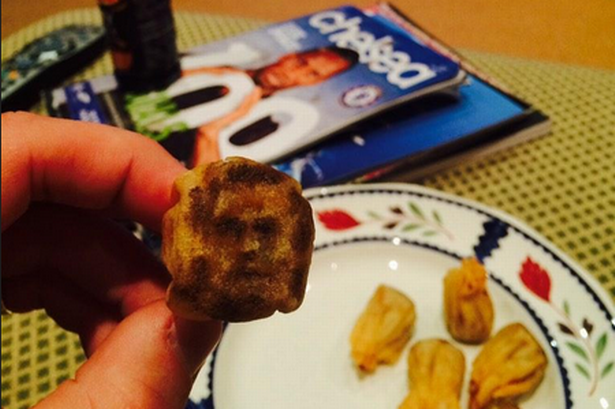 @Shed wrote:The Special One-ton: Mourinho spotted in Chinese food:
The face of Chelsea manager José Mourinho has been discovered on the bottom of a wonton in a Chelsea fan's Chinese takeaway ahead of his side's clash against Maribor
http://www.mirror.co.uk/sport/row-zed/special-wonton-mourinho-spotted-chinese-4579797

"My style of coaching is with the Cruyff philosophy."

"Mourinho is a great professional and I respect him, but I did not mention him with Jorge Mendes, a person with whom I have a good friendship for many years."

"From time to time, we talk about things."

José Mourinho: Chelsea's unbeaten start reminds me of my 100-point season at Real Madrid:
José Mourinho paused as he thought about the last time one of his sides exploded out of the blocks as spectacularly as his current Chelsea team
http://www.mirror.co.uk/sport/football/news/jose-mourinho-chelseas-unbeaten-start-4680510

“Maybe Madrid, when we got to 100 points in the league. I don’t remember but maybe that one.”

“Maybe the second season at Chelsea when we won the title for the second time. I think we also had a very good start to that season.”

José Mourinho: You can NOT compare this Chelsea side to my 2005 one:
José Mourinho says there are just too many differences between this side and his previous Chelsea team to fairly compare the two, in addition to the fact the current one has not won a thing yet
http://www.express.co.uk/sport/football/540197/Jose-Mourinho-Chelsea-2004-class

"So we play a different football. As I was saying, this team, to be so good or better than other Chelsea teams? This team needs to win."

"At this moment: zero titles. We have to transform the quality of our game into results, which we are getting now."

"But we have to try and win things so this team goes down in Chelsea's history as a brilliant team who won something."

It is silly to compare any sides. We're different to how we were then, plain and simple. 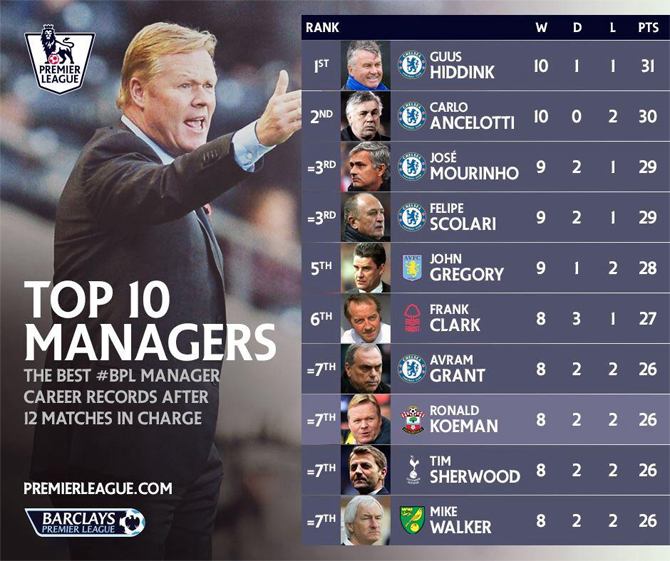 I saw that. Us ffs

José Mourinho will not stop until Chelsea are perfect, says Nemanja Matic:
Premier League leaders Chelsea have enjoyed a stunning start to the campaign and remain unbeaten in both domestic and European competition, but Matic, who has been the linchpin in the Blues' flying start, insists José Mourinho will not allow any of the players to take their foot of the gas
http://www.dailystar.co.uk/sport/football/413441/Nemanja-Matic-Chelsea-Jose-Mourinho

"Jose is on at us all the time but it's because he wants his team to be perfect."

"That's why he is the coach of Chelsea and why he has been at the clubs he's been at — Porto, Inter Milan and Real Madrid. It's why he has won so many big trophies in his career."

"Sometimes when we win and have played good, he still comes into the dressing room afterwards and tells us we can improve."

"But this is good. It keeps us all on our toes. It keeps us concentrating all the time. Jose doesn't let you ever relax."

"We may have won a big game but he could still come in afterwards and say something."

"I don't think I have been told off individually yet. Maybe I didn't hear him from the sidelines because if I make a mistake I quickly look to the other side of the pitch."

"But he knows he is just a man like everyone and that it is difficult to play at a top level for the whole season. But he tries to do everything to get the best from us."

‘I'm not looking for records, I'm looking for points and victories’: Records meaningless to me, says Mourinho:
Chelsea manager José Mourinho insists records are of no consequence to him and says he wouldn't even know about the possibility of going an all-time record 24 games unbeaten with the London club had reporters not been reminding him about it endlessly
http://www1.skysports.com/football/news/11668/9593585/chelsea-manager-jose-mourinho-unconcerned-by-records

"I wouldn't know about the record if you hadn't told me about it 20 times. The record I want is to win the Premier League three times with this club. That's the only record I want."

"The only thing that matters for me in the Premier League is that I won the title twice. That's all that's important for me."


True then and true now.

@huntsman wrote:Let's just think outside the box for a moment; I might as well add that It's the obligation of the Players to draw the crowds to their side by playing, not necessarily the most elegant football, but from their hearts with all what they've got. "You get what you want if you try hardest putting your sincerest efforts on the line"; that is the message that the players should be telling the fans cause that's what the fans are after when they watch those games.The burden falls on the players to motivate the crowd not the opposite.

How to take Chelsea to the next level? I have touched on that beginning of last season and my opinion has not changed. Mourinho has to evolve as a manager and start taking more chances in his game. He should realize that the game is not about him anymore but about the 11 players he fields; i know i ve only said that like thrice already in the past year or so but nothing has changed since then so i'm going to continue to say it.

Mourinho is able to take any team from a state of chaos into a state of winning all even against all odds. What is the common denominator for all the achievements, trophies and wins he has made in the past decade and a half so far? It's that they all came on the back of teams which are not at their best (underdogs; Porto, Chelsea V.1, Inter, Madrid). This same philosophy is not as effective on more complete teams.

Ironically the answer to this is pretty simple; Less of Mourinho and his jibes and more of the players when chelsea are in a winning state and vice versa when they start dropping points ie more of Mourinho and his tactics and antics and less reliability on the talents of the players until the tactics lift the players and elevate them to the winning state again. Fact is you cant just throw a siege on your most talented players and expect them to perform at the highest standards. Players like Hazard should be handed the freedom to do as they wish with minimal efforts in the defense area, but too many tactics, rules, strategies and order confine his talents and restrict his efficacy. Think about it, when was Eden most effective and useful to us as a team? It was when Chelsea needed him most; when they're drawing or losing. Why? It's because now the Mourinho Embargo has been lifted and he can roam freely and rely on his instincts and raw talent.

The losing streaks and winning streaks that teams go through are not a coincidence (Current Man City, Arsenal, Chelsea, United...now Barcelona; Madrid are at their best streak now). So its a game of balance. We have the best manager in the world that can take any team from a losing streak and confidently put them back on the right track but what he needs to really up his game in, is when to leave this team with its talented players play their game fluently under no obligations of giving the ball away when they're winning by one goal difference to defend their 1 goal lead. He should instill the belief that winning a game is not enough but winning it convincingly with a convincing margin; anything less may be tolerated (depending on the circumstances like when he says i am happy with the way may players played but not with the result) but not necessarily accepted. Otherwise you're inviting trouble and allowing lesser teams to feed their hunger for wins at the account of your complacency.

This type of play will not get us to win trophies.
The higher the risk the greater the reward. That is the heart of play of teams like Bayern, Barca, current Madrid. They play as if their life depended on it. They dont focus on the by-product which is the result but on the style of play and winning convincingly because results are a mere by-product.

Losing in style triumphs a win with no substance. Remember this.

This is why I was whining and bitching at the beginning of the season when we lost 4 points against our two greatest rivals in the last few minutes.

At Hindsight and on paper, it all looks good. We're still leading but that is just surface level thinking.

Nothing to add except we have to bounce back hoping that the recent slump of results wont poison the minds of our players.

“I think to a certain extent that air of invincibility that Chelsea had is now gone.”

“Jose Mourinho will be pleased to a certain extent that it is gone, and now they have to move on and bounce back.” 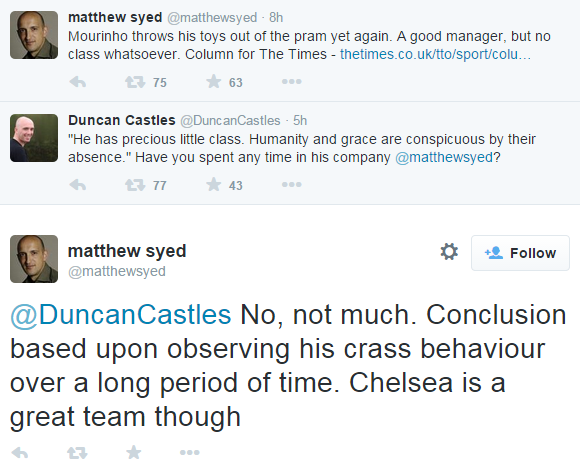 "Here, let me sit down and write an article on the personality of a guy I admit I've never met or spent any time with."


I especially love seeing moral lessons and protestations over "class" handed out by a guy whose [big fat] paycheque is signed by Rupert Murdoch.
-

"Well maybe those ballboys were watching the game at Anfield last season when Jose Mourinho gave a masterclass in time-wasting."

"We covered the game and we sort of agreed with it."

"Here, let me sit down and write an article on the personality of a guy I admit I've never met or spent any time with."


I especially love seeing moral lessons and protestations over "class" handed out by a guy whose [big fat] paycheque is signed by Rupert Murdoch.
-

This POS is so obsessed with chelsea its pathetic. Every few weeks we has an artical slating chelsea

I think it's the only way he can get it up. 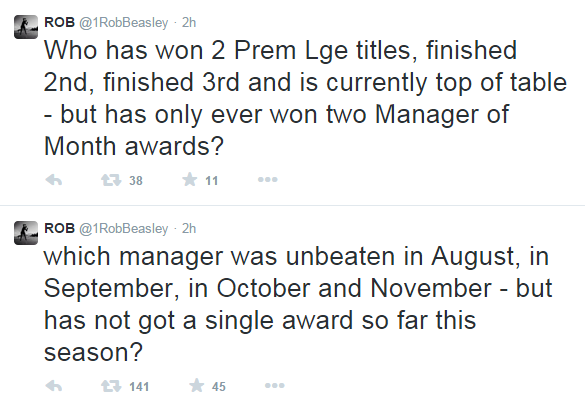