Is this our formation?

Its too early to judge which formation we are going to use tbh... Lets wait and see! I like the 4231 tbh...

Let's wait until the official announcements.

A TEAM IN THE DEADLINE!

2015, the year that is approaching maturity and dangerous for many players, as many as 11 with the Juventus management that within a couple of months will absolutely decide what to do.

Starters - are safe or almost three starters. Marco Motta , returning from Genoa, could even be borrowed from or to a figure close to one million Euros. Same fate as that of Reto Ziegler that after a season with ups and downs could start in the direction of France or any other league team, finally Quagliarella , much courted by Juventus which calls for at least 4 million euro.

PIVOT - are currently in the balance: Sebastian Giovinco and Frederik Sorensen . The first is to renew, but the prosecutor waiting for a call, it is difficult that the contract of talent Beinasco not be extended. For Sorensen many offers from abroad and the desire to find him accommodation, perhaps after the withdrawal. By figuring out the solution of Simone Pepe and Storari , which could, however, receive a one-year extension.

Finally, always hovering also Lichtsteiner , the Juventus wants to extend, the Swiss want the increase, but there will be an agreement likely to be treated.

RENEWALS SAFE - should not have any particular problems, and finally the renewal of Buffon, Barzagli and Chiellini . The first and the third should have at least a two-year renewal, according to the annual renewal. At the moment we do not see these three critical positions.

You lads ready for another pre-season mass suffering? We're so bad in pre-season every single year and it sends people into mass hysteria.


Hahahahahahah true that... Our failure in that Champions Cup though lol XD.

Even though, it basically summed up our failure in Europe BTW

you can bet Yahnited fans will be watching and making more Vidal theories during pre-season ...

you can bet Yahnited fans will be watching and making more Vidal theories during pre-season ...

'Vidal unhappy with pre-season losses.He's thinking only about United'-Daily Mail

Media is full of crap

LIVE VINOVO - 27 Called for withdrawal. Absent quail. Present Coman and many Spring. Tevez has returned to Turin. Tomorrow shooting at the Juventus Center. At 16 speaks Llorente

19:16 - 27 CALLED FOR THE WITHDRAWAL - Press Juve - The wait is over, Juve back to work. Less than two months ago, it was May 18, the Bianconeri got up in the sky the league and the Cup and Turin in Italy exploding the party. But now that, however pleasant, is the past and now it's time to dive back into the present and look to the future. And this has a precise date: Monday 14 July, the Italian champions will resume to run, sweat and toil and push forward to the new season. The meeting and the first session are set at Vinovo in the afternoon and the group will not be part of the veterans of World Brazilian, who still enjoy a few days off and will join fellow from July 20 onwards. There will, however, with others, Fernando Llorente, before training, meet journalists at the Media Center in Vinovo. The press conference of The Lion King will be held at 16:00 and will be broadcast live streaming on Juventus.com.

This is the list of 27 players who will meet in Vinovo:

1 4:50 - TEVEZ IS BACK IN TURIN - Juventus will resume tomorrow in Vinovo preparation for the upcoming season. The club Juventus, through its official Twitter profile, revealed that Tevez has returned to Turin: "Look who's back! @ Carlitos3210 is returned to Turin and is ready to start running. Apache Welcome back! Http://t. co/qZaMmi5fYJ, "wrote Juve who also posted a photo of Carlitos Tevez.

13:20 - TOMORROW'S RECOVERY - After almost two months, tomorrow will reopen the gates of Vinovo. Juventus, in fact, resume preparation for the upcoming season. Antonio Conte find her kids, even though the group at its disposal will be reduced. In fact, tomorrow will miss the 12 national fall from 20 July. A Vinovo, however, there will be Tevez and Llorente who have not been called up for the World Cup, as well as Ogbonna, Brown, Giovinco, Pepe and Rubinho and new signing Coman, the group will be joined by some players in the spring. From tomorrow, then, the Italian champions will train hard under the command of technical Salento that could also work on a change of form. Conte, in fact, might decide to switch from 3-5-2 to 4-3-3.


Fernando Llorente has not ruled out the possibility of Juventus switching to a 4-3-3 formation this season.

The Old Lady deployed a 3-5-2 system last year in another successful defence of their Serie A title.

However, at a Press conference today, it was put to the Spanish forward that the teams who have enjoyed success in European competition of late have tended to operate with a 4-3-3.

“For me it’s the same, the only thing I want is to play to help the team,” Llorente said. “I will do everything the boss tells me to.

“We will play in the way he says. We’ll see how we play best, we still have a lot of work to do in training. We will see in the end.

“We need to have the possibility of playing in other ways. We’ll see if the boss believes the 4-3-3 is possible with the players we have and the ones who could arrive.

“As I said before, we still have a lot of work to do. We need to see whether we’ll still be a strong team if we change system, if we do it well we will see.” 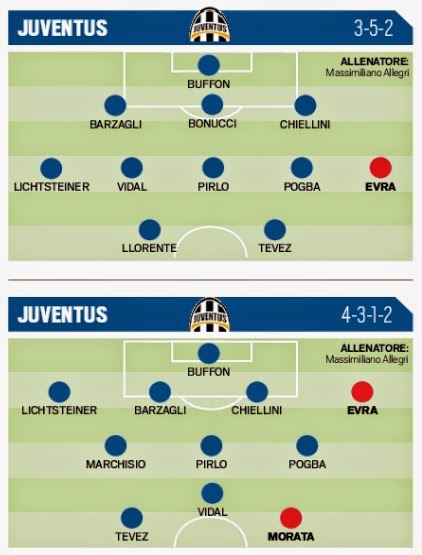 Yeh I agree. Asamoah brings more energy in a 3-5-2

BTW, anyone knows when will the International players who played in the world cup will come back?