Who will advance to the quarter-finals?

ffs my heart can't take this

i'll never get over the fact that some posters rated algeria as " one of the worst teams in the tournament " prior to the start of the world cup.

What a match from Algeria.

After the match i stood in front of the TV and applauded them, such a great team.

IMO best match of the world cup so far.

The only objection I have is that the Algerian goalie was elected Man of the Match and not Manuel Neuer (although it was a close call - the Algerian keeper was strong, too, the longer the match lasted).

The only objection I have is that the Algerian goalie was elected Man of the Match and not Manuel Neuer (although it was a close call - the Algerian keeper was strong, too, the longer the match lasted).

You're wrong, Mbolhi made countless saves to keep the match nil-nil. one of the best goalkeeping performance in the world cup so far, after Ochoa of course.

We were incredibly shit in the first half, and only half-way decent in the second half.
Very lucky to not concede in the 1st half... Then again, we were vastly superior in the 2nd half and after, so I guess we deservedly went through.

This kind of performance will never see us through France though, this looks like a hasty exit at the quarters at the moment.

Special mention to Mustafi and Löw for being shit at their jobs, by the way.

Must read for German speakers - the MBM by 11freunde.de: http://www.11freunde.de/liveticker/deutschland-algerien-im-11freunde-liveticker

iftikhar wrote:rwo, have got anything in English!!! or can you summarize the issue!!!

Oops, I noticed I didn't see this before. I'm sorry, I don't have any English language article, but in short - FIFA guards ripped down (and damaged !!) several large and at times old and thus precious cloth support banners that fans brought with them. The FIFA guys who did that were at times accompanied by armed guards, so the fans were afraid to complain (and the FIFA guys of course wouldn't have listened anyway).

The DFB tried to officially register some large choreographies (one with a huge DFB jersey that should have been unfolded and a huge cloth banner that was supposed to be rolled out before the match), but the FIFA said no to that right away. THewre was no explanation by the FIFA why it was forbidden, only a definite "no".

Supposedly some of the Algerian players were fast (Ramadan). If true then they deserve more credit then we are giving them.

16 of them were. so most of the team was

You sure!!! It means they were playing while fasting.

Those that didnt rate Algeria just didnt keep updated, they were ranked like 23rd on FIFA ranking with so many wins prior to the WC. Their first game was too cautious imo but showed a bit of what they are capable of. Although didnt think Russia would be this poor so I Guess everyone just thought Algeria would not get out of the group. 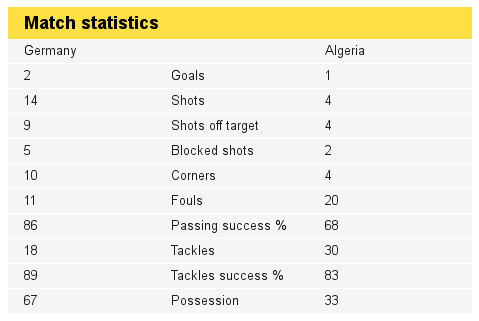 Could someone please tell me how it was 28 shots on goal vs 10 shots on goal? o_O  It sure felt as if mainly the Algerians were in the German half on the pitch! 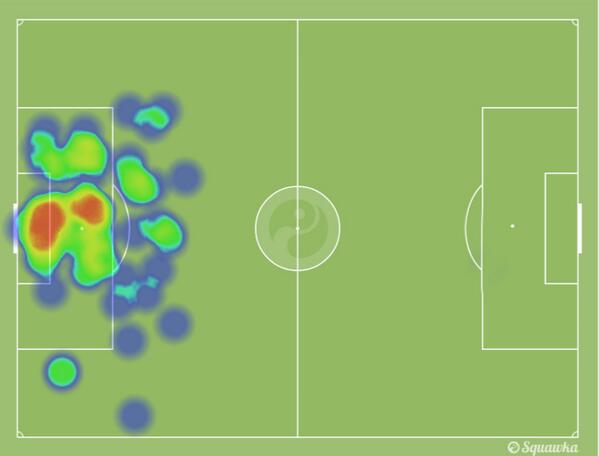 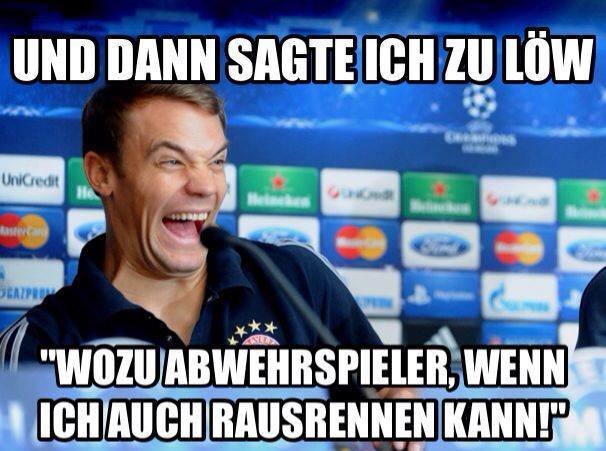 And then I told Löw: "Why defenders when I can run out of the goal, too?" XD

Post match interview with Mertesacker aka "What do you want from me?!", in German.

Kudos to Merte. If I would have been asked such idiotic questions after such a match by an obnoxious reporter, I would probably have been less polite.

nice read - thanks RWO! my fav. part where he says Neuer is quietly upsad that all the others are not as good as he is.... *lol


I have a huge crush on Neuer after yesterdays game.
What a Hero!

First half was desaterous (imo) and I did fear that the game would be so much harder than everyone thought.
Not sure what Mr. Löw is thinking when he is putting the line-up together....

Why can't he have Lahm doing what Lahm does best and have keidira in the middle instead of Mustafi on the side and Lahm in the middle?

rwo power wrote:Kudos to Merte. If I would have been asked such idiotic questions after such a match by an obnoxious reporter, I would probably have been less polite.

Oh, German Reporters.... how I do not miss you!
Always such negativity as if they where seeking to paint the picture of a unsuccessful team just to be able to then finally blame someone for the failure!
Horrible way of asking questions!

If I was Merte I would have walked away... (maybe punch him in the face before leaving)...

On the other hand the reporter did a good job - perhaps deliberately asking "stupid" questions - and got a more interesting interview than your run-of-the-mill "I'm happy we won" stuff.

(I didn't even watch the interview, don't speak German)


Anyway, Algeria needed to score from one of their first-half attacks, but their final ball or shot kept being poor. Neuer was outstanding. Had Algeria scored, then their counter-attacking tactics would have started to work even better. The longer the game stayed goalless and the more the players tired and the more difficult counter-attacking got, the more likely the Germans were going to win it.

I guess the better team won, but Algeria definitely had their chance to cause a major upset, it was only poor finishing and extraordinary goalkeeping that kept them from doing that.

Although Algeria's keeper deserves a shout out, too, some great saves.

Zizou wrote:If I was Merte I would have walked away... (maybe punch him in the face before leaving)...

If the reporter would have asked Oliver Kahn the same in such a situation, he would have been eaten alive, I bet. Any defender of the old guar would probably have replied with a "Blutgrätsche" (bruising tackle) against the reporter and he would have deserved it XD

Art Morte wrote:On the other hand the reporter did a good job - perhaps deliberately asking "stupid" questions - and got a more interesting interview than your run-of-the-mill "I'm happy we won" stuff.

Naw, it was the usual "stupid questions by the ZDF" stuff.

Art Morte wrote:Although Algeria's keeper deserves a shout out, too, some great saves.

Absolutely agreed. Although I still think MoTM should have gone to Manuel Neuer and not him.

Page 4 of 5
Permissions in this forum:
You cannot reply to topics in this forum
Latest topics
» 2022/2023 Premier League Discussion