@Shed wrote:Seriously, this is getting ridiculous now. I admit his shtick was entertaining and endearing in a tribalistic sort of way when he first joined, but his antics have become so horribly tired and tedious, and are really nothing more than a distraction and a hindrance to the side as a whole. He spends infinitely more time trying to rile up and pick petty fights with opposition players than actually trying to play football. And all his nonsense does is rally and galvanize the home support and makes their side doubly as motivated to beat us. Not to mentoin the lengthy and growing cumulative ban-time he's racking up. Aside from that, you people can bang on about systems and tactics all you want, but when his movement is nonexistent, his passing is poor, his dribbling is pointless and dead-end, and his increasingly frequent drifting out wide leaves us with a big black hole in the box on just about every attack, it's hard not to look at him lately and see Torres 2.0.

@Blue wrote:The only man to blame is Mourinho... He encourages this shit behavior from Costa.

I have a hard time criticizing any player; when good players like Cesc, Matic, Oscar, Hazard and Costa all have turned crap.

They are good players... The problem is Mou.

Cannot blame Costa when only Willian is playing well.

I wouldn't say Diego's slump in form in most of 2015 was only Mou's fault and everyone else around him. He obviously has a lot of technical flaws, depicted in that Shed's post, which can make him look average and are the reason why he doesn't excel with Spain's NT. More so when he's not motivated enough (okay, motivation is definitely Mou's fault) but he's not a Torres 2.0, he is actually a beast when the team's playing around his strengths like in 2014 and since Hiddink took over and exactly the forward we need despite not being WC like Lewandowski, CR7, Suarez, Higuain.

Reading back through my posts about him circa as recently as earlier this year just highlights for me how far he's come. He's cut out all the contrived, counter-productive antics, vastly improved his responsibility and restraint (he's been on 4 yellows since like September ffs, for a guy who used to collect FA bans for fun) and look at the result it's produced.

A god among men.

Yea, I don't know if you watched the double interview with him and Luiz, the one when Luiz was translating portoguese, and when asked about his improved behaviour he answered "I realized I just can't fight against the world"

That's hilariously so simple and true.

I think the way we play and how much more time we spend attacking, and how he's more involved on the ball calmed his temper. Playing as an offensive player for Mou is a medieval torture 9/10 of the times. Plus Mou is known to bring the aggressive side of a player to its maximum extent.

Conte has worked wonders with him, tbh.

But I think Conte is a somewhat similar manager to Simone, so it isn't surprising they are both getting the best out of him. 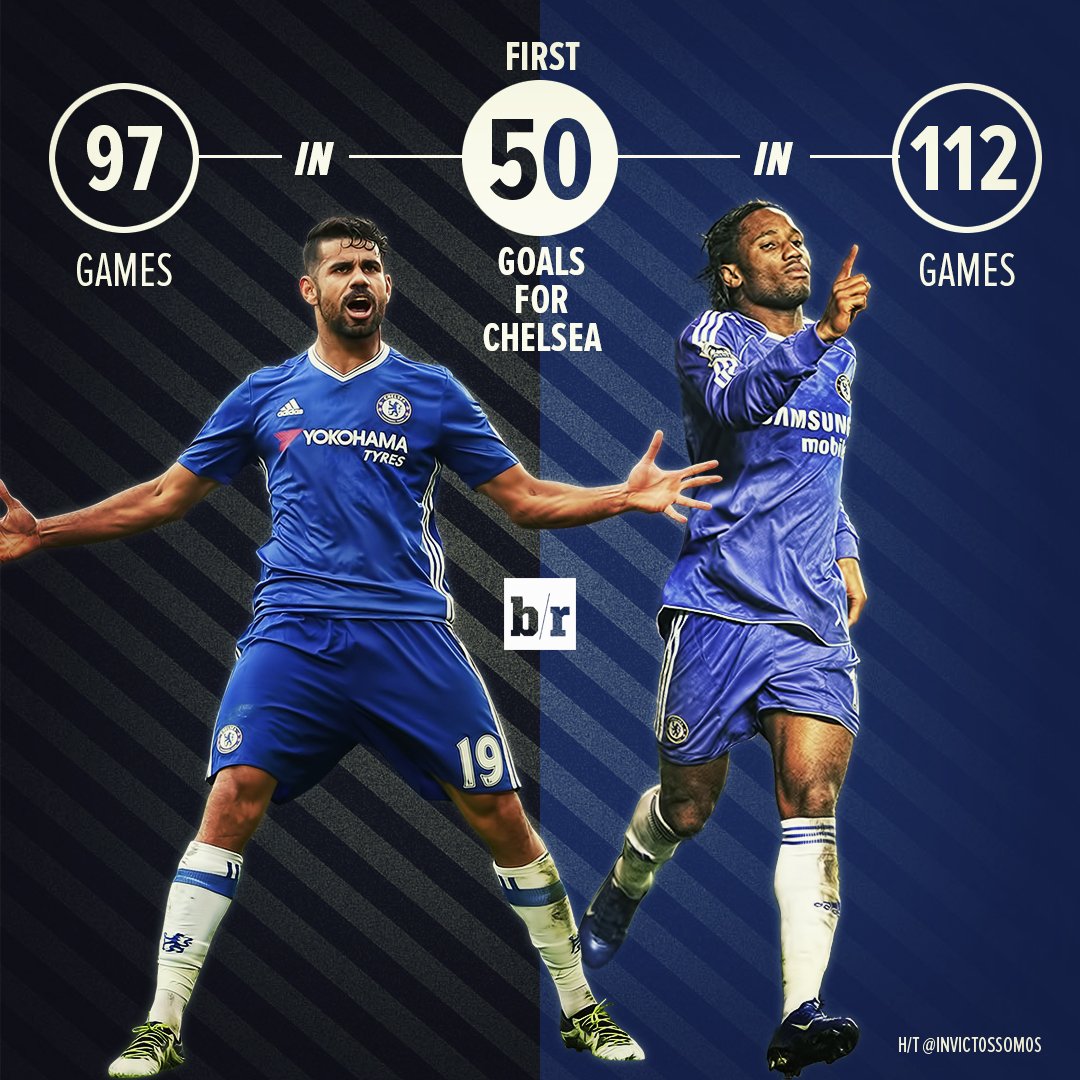 Anyone knowledgable will know this is no surprise. Drogba was very slow-to-start for us after signing. Took him awhile to get going unlike Costa who hit the ground running and even in ebbtides still manages to produce to some degree. It's also the case that Drogba's mystique often overcasts it, but on a game-to-game level, he was on the whole average at best for us. Only scored more than 12 goals in a season twice in 9 total years at the club. It was his clutch goals in big games that duly and decisively gave him his immortal, legendary status. As a consistent goalscorer Costa is miles ahead.

I know, Lampard would outscore DD every season but the 09-10. One season he got outscored by Anelka playing right midfielder FFS. Costa is becoming clutch, tho he's still from GOAT clutchness like Didier's, and a more consistent goalscorer. He's channeling Lampard's statpadding and Drogba's crucial goals

Tbf we don't really know how Costa's productivity is in the really clutch games. He scores in big games in the league as well as crucial goals in tight games, but when we've only played in, what, 1 final with him so far (which he did score in tbf), there's no way to know if he even comes close to Drog. His 9 goals in 9 finals record is just phenomenal.

Yea, his Wembley record is crazy. His heroics in our CL win is even crazier considering that we had no business whatsoever in the Napoli home, Barcelona home and Bayern away (?) games had we had any different striker in the planet except him. Doubt that Diego could ever reach that clutchness, but if he keeps up his current clutchness it's no biggie

Drogba was the ultimate big game player. Failing to reach quite those heights would be no blemish indeed.

Costa has agreed in principle to sign a 5 year contract extension according to the sun.

Good news but with a huge grain of salt.

Brilliant news if true, but of course I'll defer excitement until it comes from a more credible source or is completed and confirmed altogether.

Indeed, I hope Courtois follows if its true.

That would be lovely news indeed, with Real's inevitable goalkeeper recruitment initiative coming this summer

Let's hope his spanish heritage tips it in his favour.

The Times and Sky Sports are both reporting that talks are ongoing, no deal in principle with Costa.

In addition both to football and to himself, this guy is an embarrassment to the shirt. We've made jokes about the back-and-forth polar-extreme nature of posts made about him in this thread but it turns out that both positions are accurate. When he's doing his job he's brilliant at it, but when he's not scoring—which, judging by his spell with us on the whole, is most of the time—he offers absolutely nothing. He can't pass, can't hold up the ball, can't take players on - nothing. He screws up literally each and every move/attack/counter/etc. that our players are daft enough to involve him in. The second the ball is passed to him you can bet dollars to donuts that that spells the end of whatever it was we were putting together. His 2017 so far makes '11-'14 Torres look like Ronaldo de Lima. And as if all that weren't enough, he looks well and truly back to his pathetic, shameful best when it comes to his shocking behavior after seeming to have tamped the absurd, counter-productive antics down for good. It's contemptible and repulsive and completely unbecoming of what Conte is otherwise turning us into after years of José-initiated thuggery being the norm.

It's rather humorous in a self-harm-inducing sort of way that when the China rumors rocked up in January people far and wide were saying that if he goes we could never maintain our form and win the title without him, yet fast-forward 4 months and it very much looks like we may be losing it not only with him, but largely because of him. The sooner we replace him with an actual footballer possessing both a halfway manageable temperament and a few brain cells, the better.

Think Shed has pretty much expressed my views as well. What an absolute shit house of a footballer. Doesn't even look like a footballer anymore. The fact that he insists on running into opposition players with outlets like Hazard wide open waiting for the dangerous yet ridiculously easy pass, knowing full well he's COMPLETELY SHIT at any sort of fancy footwork is mind blowing to me.

Never mind Chinese clubs coming for him, we need to parade him in the streets of China for anyone who's stupid enough to bid a world record for him.

I see no reason to keep throwing him in game after game, want to see the trio of Hazard-Pedro-Willian upfront.

It's tough, Costa is clearly our best CF but has been so poor recently. It's up to Conte, I trust him to make the right call.

It's a shame because we don't really have any other options. Batshuayi just doesn't seem ready yet

Played well today, thankfully. Hopefully he can see out the season in this form before he *bleep* off. Should add a few more millions to his transfer fee.

Page 19 of 20
Permissions in this forum:
You cannot reply to topics in this forum
Latest topics
» Pep Guardiola's adventures in Manchester City