Very bold of him to claim these 2 guys are his ideas. Could have just not said anything.

If they fail, only one person going to get the blame.

Barcelona scored 62 goals in the second half of La Liga season, an all-time record in La Liga history.

For the first Liga season ever, Barça managed two separate 6+ consecutive clean sheets streaks: from Round 1 to Round 8, and from Round 32 to Round 37.

Barcelona won 93% of the available away points in the 2nd half of La Liga this season (25 out of 27), a record in the club's history.

Barca allowed only 0.53 goals in their 19 away games this season, a new all-time record in La Liga history.

Considering the shaky start without Suarez, with Pique in bad form, Alves in bad form, Rakitic adapting, Lucho not picking his ideal XI etc., I wonder if next season can go as smoothly if not better. At least in La Liga. Cup games are unpredictable of course.

"Barcelona scored 62 goals in the second half of La Liga season, an all-time record in La Liga history"

First half was Lucho, 2nd was Coachessi

Xavi: "Barca have a team that can win the treble again & Enrique is a magnificent coach. He's a methodical perfectionist & a great leader."

This reminds me of his quotes from the beginning of last season:

"I have the same feeling as with Guardiola in 2008," Xavi said. "Good years are coming. He [Enrique] is a winner, a born leader."

He said this in September 2014 when Barca was far from convincing yet.

The best thing this man has brought us is an oustanding physical/mental form.

For me, the most telling image of the derby, was a Madrid counter in the second half, where our guys tracked backed lighting fast and ended up outnumbering Madrid's attackers 8 to 3. And they were losing!

And this, the season after we won the treble.

The guy has transformed Barca into a tight compact grity unit. What I most like about this Barca under Lucho is the way we approach big matches with all intensity and aggressiveness.

Lucho is awesome, and he was great again at Camp Nou. He fielded a slightly different lineup from the one in Madrid with a slight rotation of the squad thanks to a healthier group of players, and he played the cards perfectly. He sent ‘MSN' out and asked them to do the usual "CREATE HELL" things, and that got him a game-ending first half lead. Then he preserved Sergio Busquets by subbing him out at halftime and took Gerard Piqué out after Shakiro scored a goal, mainly to avoid a dumb red card since Piqué was already booked. He also gave an entire half to Sergi Samper, which is important for the kid's confidence. Enrique did his job well again, and has survived the early season madness to bring the team back to what we saw in the first six months of 2015. Keep being you, Lucho. wrote: 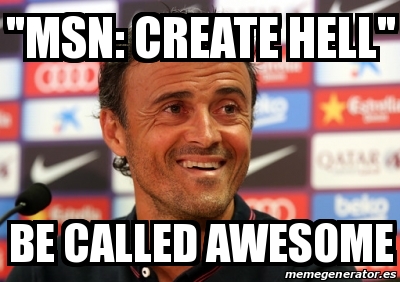 Barcelona have won 13 of 14 games they played against Man City, PSG, Bayern, Juventus, Atletico and Real Madrid in 2015

Luis Enrique is like a drill sergent. Even messi, who we made fun of for being fat/unfit is pressing too. Suarez looks even faster then last season imo despite being older. neymar's fitness is incredible this year.

Valencia is next week.

Barca have conceded only 1 goal in last 7 matches. With the defense we have its huge feat imo

Pirloisjesus wrote:Barca have conceded only 1 goal in last 7 matches. With the defense we have its huge feat imo

Good thing Barcelona just don't defend with the back 4...

Apart from the usual brainfart our defense is very solid, more importantly they all are great at playing the ball out the back. Let's not pretend like we've got the worst defense in the leauge, can we?

We did concede incredible amount of goals before that tbh

Didnt defend well as a whole. Cant just blame it on the back 4 because defending is a process that involves every player on the pitch (well maybe apart from Obesenel). It's fixed now though, the pressing is more efficient etc. Credit goes out to Luis Enrique in full- and to his assistants obviously.


Valencia is next week.

Without the jinx, after watching Valencia against Sevilla...to not beat them would be a crime. They look in a very bad moment and look like no threat in the attack and leaving spaces in the back.

Luis Enrique of course deserves his nomination for coach of the year and is very likely to win it deservingly.

However as much as we admire Pep Guardiola he shouldn't have been there. It had to be Massimiliano Allegri.

Enrqiue, Allegri and Sampaoli would have made the perfect trio if ever there could be perfect nominations for such an award.

How did Pep get there ahead of Allegri?

futbol wrote:How did Pep get there ahead of Allegri?

It's 2015 I guess. I think BAyern being on a good run and Juve languishing in Serie A might have swayed people. I would have picked Count Max.

futbol wrote:How did Pep get there ahead of Allegri?

It's 2015 I guess. I think BAyern being on a good run and Juve languishing in Serie A might have swayed people. I would have picked Count Max.

If this is indeed the reason, these awards need to be moved to July/August at the end of every season and before the new season starts. It's ridiculous to value the first 10 or so rounds of a new season higher than the end of the previous season where actual trophies are won and lost. Allegri almost won the treble with Juventus ffs. 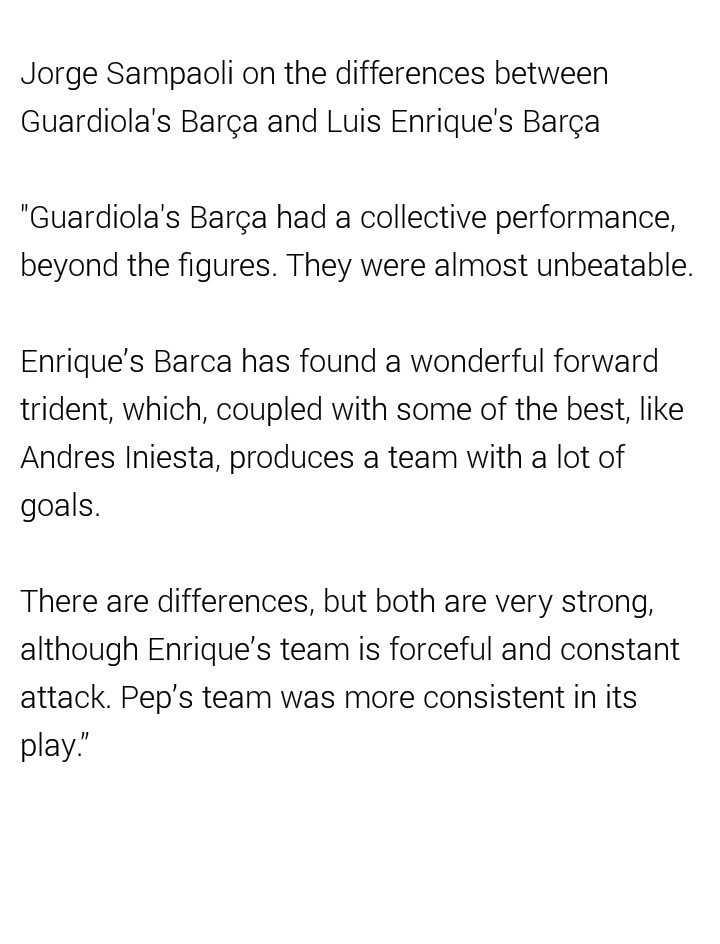 Pretty good comparison. I think as time goes you can see more the differences in two strong teams.

I think this current team, if you press them. They have an alternative, they can play directly to the 9. They can use the space behind. Even if you dont press them, if you simply leave space behind, you can get badly punished at any moment.

Pep's team didnt have that. In the early years that was a bigger threat, with Henry and Etoo, Villa first year. But after that, with Ibrahimovic, no. But they didnt play to that, when it came along it happened (often against Madrid for example) but it wasnt their idea.

However, Pep's team didnt need that as much as they team because you couldnt press them into mistakes. They were too good with the ball around the back, everyone was super composed. And they had different way to go forward, they could drop Busquets into a back 3 on a whim depending on how many forwards the opponants pressed with and the other players understood perfectly how that changes their role.

This Barca doesnt do that, they can be pressed into errors and dont have as much composure. Like I said, they have an alternative.

I dont think you can compare them directly, because they didnt have shared opponents, obviously.