Cafu: ''Flanagan is my successor.''

Cafu: ''Flanagan is my successor.''

Cafu jetted over to Merseyside to see Flanagan in action against Newcastle United in the club's final Premier League game of the season last Sunday and says he sees similarities between himself and the defender.

"He is a good player; still young and developing, but already gaining recognition at Liverpool and he might even have an opportunity with the English national team. He'll be a great English player in the future," Cafu told the club's official website.

"I first started hearing about him by watching Premier League matches and observing his performance along with other players.

"I then started seeing some news saying he is the Red Cafu! So there's nothing better than coming to the city and taking a picture with my successor.

"He has speed, strength and determination. He's an athlete who goes after it and never gives it up. That's exactly what I used to do; there were no missing chances for me, no tiredness and no being dejected.

"I see that style in him too. I hope he continues that way and achieves as many trophies as I did." 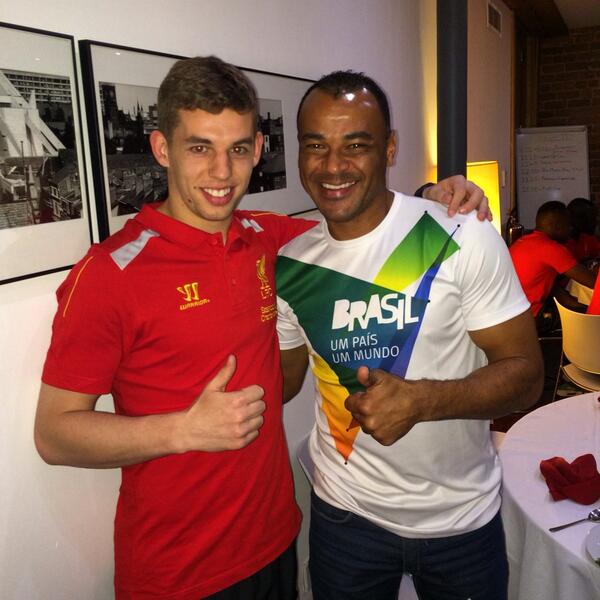 It's gotten a bit funny, but looks like they're both enjoying it x)

Similar topics
» Can Nico Yennaris be as good as Cafu?
» 5 time European Champions vs. Flanagan and the lads
» Rory Delap's successor
» Charity in India - Maldini, Pele and Cafu feature
» Javier Zanetti vs Cafu

Today at 5:02 am by The Demon of Carthage

Today at 2:30 am by BarcaLearning

Yesterday at 11:25 pm by Hapless_Hans

Yesterday at 11:24 pm by Hapless_Hans

Yesterday at 9:11 pm by Myesyats

Yesterday at 8:10 am by Hapless_Hans