Your videos were amazing Devi

ohh good old days, I was still learning now I know but I don't have the time

Look how drunk pirlo is

Wow shit.... :/ I think that its because of his family problems and divorce

it wouldnt have gone that far if not his personal problems. 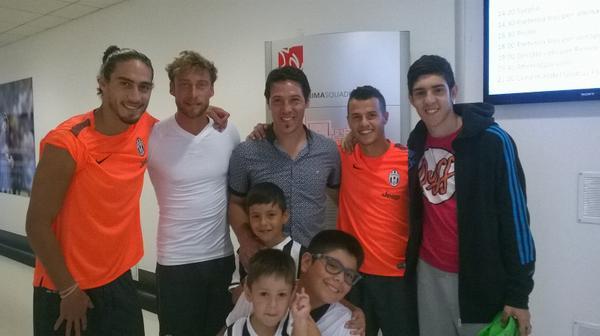 ahahahaha OMG Marotta with that trollface

So I lost my S6 Samsung Edge 2 days ago.

salmano9 wrote:So I lost my S6 Samsung Edge 2 days ago.

Damn here we can dream in our dreams about that phone

salmano9 wrote:So I lost my S6 Samsung Edge 2 days ago.

Damn here we can dream in our dreams about that phone

Keep it low to a S4...it will hurt less losing your phone,trust me.

19:16 - CHEERFUL Saturday SHOULD CHANGE FORM - Tomorrow, Juventus will train to prepare for the match against Napoli. Massimiliano Allegri will speak before the meeting at a press conference at 12 noon The coach from Livorno vs. Napoli should rely on the 4-3-3 which will turn in during the game in a 3-5-2 formation: in the door there will be Buffon. In defense they will act on the bands Lichtsteiner on the right and Evra on the left, in the middle of space Barzagli and Bonucci. In midfield the chances are slim that Khedira will recover, in its place, then, play Sturaro, together with him titolarissimi Marchisio and Pogba. In attack there will Cuadrado, Dybala and Morata. With these eleven players on the field, Allegri will have the option of deploying a chameleon-like form, in fact, the number 16 Juventus will act on the line of the attackers, but on defense will scale to give a hand to Lichtsteiner, Barzagli, Bonucci and Evra.
====
It's great how we are gonna use this 433/352 system. Allegri is using Licht like he was using Barzagli vs Sevilla first leg if you remember. Really smart.

good solution, didn't we play barzagli like that against City as well? he beasted that game

rincon wrote:good solution, didn't we play barzagli like that against City as well? he beasted that game


Yes I believe so

Similar topics
» J Museum!!!
» Inauguration of J-Museum!
» Is FC Barcelona's Stadium/Museum'' the best ever?
» Juventus for Borriello we are close to final. The Genoa tomorrow will bid for Amauri to Juventus
» Victor Quagliarella: ""Fabio will stay at Juventus.Juventus doesn't want to sell him"