The week's mid-week Premier League fixtures pits Chelsea against rivals West Ham United in a Wednesday evening London derby at Stamford Bridge. Up for grabs, a valuable 3 points for both sides. West Ham will be looking to nick their atrocious form of late and pull themselves out of the drop zone, in which they currently sit 18th, while Chelsea will be looking to take advantage of 4 of the League's top sides playing each other face-to-face, with Liverpool and Everton in a Merseyside Derby and Tottenham and Manchester City kicking off at the same time, with League-leaders Arsenal facing a stern test themselves the day before as they travel away to Southampton. 3 points would ensure José Mourinho's men gain points on 2 or more of those sides by the close of matchday, and that will doubtless be in the Blues' sights.

The corresponding fixture last season was one of triumph for the Blues. Frank Lampard scored his 200th goal for Chelsea 19 minutes in to put the home side ahead, and Eden Hazard's brilliant strike on 50 minutes sealed the points for Rafa Benitez's side. 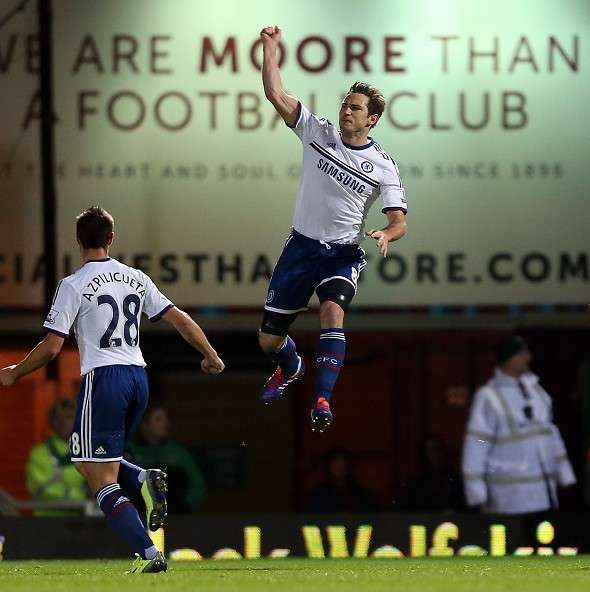 The reverse fixture 2 months ago at Upton Park also ended brilliantly for the West Londoners, finishing a 3-0 rout courtesy of a lovely Oscar solo effort just over 10 minutes from the interval sandwiched in between a brace from customary West Ham torturer Frank Lampard.

The two sides negotiated contrasting results in the last round of Premier League fixtures a week and a half before. Chelsea triumphed 3-1 over Manchester United at Stamford Bridge courtesy of a hat-trick from Samuel Eto'o, while West Ham sunk to yet another defeat, to Newcastle United at Upton Park via goals from Loic Remy and a brace from Yohan Cabaye. Fernando Torres remains Chelsea's only absentee following his injury in the Blues' 3-1 win against Manchester United the matchday before, while the visitors will be without midfielder Mohamed Diamé, frontman Ricardo Vaz Te, and former-Blue Joe Cole, among others, for Wednesday's clash. They are so poor, I'd be embarrassed if we don't win here.

Diame is easily their best player aside from Reid. Should be a good win, hopefully we can get a grip on it early and rest some players early on for the game against City.

New Hammers Italian duo Marco Borriello and Antonio Nocerino could feature against Chelsea:
The new loan pair are both included in the Hammers' squad for the trip to Stamford Bridge while Kevin Nolan is also back after suspension
http://www.mirror.co.uk/sport/football/news/west-ham-team-news-marco-3072282

Both their Italians are very average, I would not be worried about them at all.

Surprised Jose has only played them 6 times!

No Chelsea debut yet for Blues new-boy Mohamed Salah as West Ham visit Stamford Bridge:
The former Basel star has yet to arrive at Stamford Bridge and he won't be making his debut as the struggling Hammers arrive in west London
http://www.mirror.co.uk/sport/football/news/chelsea-team-news-no-debut-3069805

Yeah, no surprise there.

Matic should start, Will be interesting to see who partners him, I imagine Ramires.

Eto'o to play up front with Willian-Oscar-Hazard behind him. Not sure about defence.

Ba will start, I'm certain. His physicality will be useful against Sam Allerdiché's thugs and Eto'o will be saved for City Monday.

As long as we don't play an AM there.

I see where you are coming from too. Would help our AM's score.

Expecting city to win their game, and so we need to take this chance and score more than one goal to clinch 2nd place at the end of the day!


Have you done so to watch the game?

I am normally up this early, just I am also normally at work.

But yes, waiting for the game.

Beat me to it

Hopefully, I hope it doesn't come back to hurt us.

What a rubbish team West Ham have!

Close down Carrol and they have no threat at all.

So I'll be watching our game on an internet stream, while the City-Spurs game is on US TV which I'll have on in the background to provide updates as necessary

I will be watching Chelsea on my big screen tv, scaring my dog every time we score.