We're deep in it right now. It is real, and tonight's loss to Sunderland smacked it in our faces. I can't even remember the last time we lost 3 in a row.

It's clear the players have no confidence in Moyes and are not giving him their all. And Moyes looks so devoid in confidence and looks clueless sitting mumbling to himself in the dug out. Something is clearly rotten inside the club that is manifesting itself with each passing game and loss.

Did you notice Moyes' expression through out the game v Swansea on Sunday? He looked emotionless and depressed. Even when Chicha equalized he didn't even raise a smile,

He looks down,out of ideas and out of his depth. The job is far too big for him and the players, barring one or two(Januzaj and Rooney) are not responding to him and don't look like they respect him or his backroom staff.

Did you guys see SAF, Sir Bobby Charlton and Robson's expression at the end? See how Charlton shook his head in dismay? Reality is hitting them now.

It has not worked out how they have hoped and if we lose to Swansea at OT, then that would be unforgiveable. He would have to either resign or get the sack.

The reigning champions struggling like this is baffling. We're not world beaters, but we're def not as shit as what we're showing. That is down to managing and coaching.

I think if he improves the squad, and still fails, then it'll be the final straw, if it isn't already. However, can we risk it? If we lose on the weekend we'll be 8 points a drift. Tough, tough decision whatever the Glazers decide to do, the fans will be split on it.

We will probably be out of the league cup cuz our home form is terrible, that means in two weeks we will be without any achievable trophies to aim for. And that's still January.

I don't mind having a few season without winning anything, that's not why I'm watching football. But chaining losses, not qualifying for the CL, not even remotely competing for the title is not what UTD is synonym of.

If we think rationally, there is no way Moyes is a such a bad coach. Everton under him was always a pain, they had a gameplan so he isn't tactically inept. But I fear he lacks the charisma and the aura SAF and people like Guardiola or Mourinho have. Players are less motivated and Moyes can't get them back to their best because he's lacking the X-factor winners have.

It was a stupid idea to begin with to hire someone who has never won anything. SAF didn't come empty-handed, he won things with Aberdeen.

This season a is a disaster with a terrible combination of transition mixed with injuries to key players and a *bleep* inept vice-chairman. Give us David Gill back, let Woodward go back to JP Morgan, he has no idea how to proceed in a football club.

Now that I am fine with the idea of missing the CL next season, I think Moyes deserve a season with a proper transfer market. We have been spoiled for the last 20 years, so a few season without trophies is fine, but if Moyes can't even mount a decent title assault next season, he has to be axed, even before the end of the season if it's still the same shit. Next season UTD is going to be very different, I doubt Rooney and RVP will be there for a start. 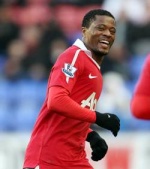 Can we even afford to allow Moyes 200 mill?( which is alleged he is getting). He went FM mad in the summer and wasted far too long in trying to entice players we had unrealistic chances of getting.

Then he panicked and greenlighted Woodward and co to overpay for a s*** mf we didn't need- when we could have got said midfielder for cheaper had we went for him earlier. It was a disaster. Can he be trusted and can we convince top quality players to come and play for us under an unproven manager like Moyes while we're out of the CL?

My stance is, if Moyes has lost the players' belief in him, then he needs to go asap. This season will spiral out of control if he remains as things will get even more toxic.

RED wrote:This season will spiral out of control if he remains as things will get even more toxic.

The way I see it, this season is lost anyway, so let's prepare for the next one.

Buying players will be harder without SAF and the CL, and even though we still have the name of Man United, we will have to compensate by offering higher wages.

Without CL, we'll have to give Man City type wages. I think we should hire a Director of Football, where Moyes gets the final call to get the player or not. I think he's struggling with finding potential targets, and without the CL it will be even harder for him.

Sometimes even when we have players wanting to come to us, we have a buffoon like Woodward screwing things up.

Losing Gill was a major blow too. Massive one.

they haven't been afraid to make big decisions during their time in charge of the Tampa Bay Buccaneers. They've sacked five head coaches in 18 years including one, Greg Schiano, who was axed this week, after just two seasons.

That averages to about a coach every 3-4 years. I don't know in the NFL if it's usual for a manger to be there 5+ years.  It might be like La Liga in that respect, where it's rare to see a manager at one club for so long.

EDIT: it does only say sacked, they could've had more head coaches in that time period, therefore the average could be less than 3-4 years.

The guy who said players dont respect him is spot on. They played under the guy with 15 bpl titles ffs. Then a guy who has not won anything comes in and starts shaking things up; players no doubt are like "who the hell is is this guy. what does he know?" It would be one thing if he'd gotten off to a winning start and built up his credibility with his players, but as events stand, they have no faith in him. It was a retarded idea to begin with...only a guy like mourinho couldve walked in after fergie and inspired similar respect in the organization. Then it wouldve made the transition much easier for the next guy.

k my viewpoint is that its not about buying players. of course new players are needed for us. But that can be done.

This general notion of no CL to offer and hence we wont be able to attract talent and all are seriously overrated and can even be plain bull shet.
Its about and only about money. If we decide to spend both on transfer fee and wages young wonderful players will flock OT.
So I am not worried about buying hence. Now that things have been going utterly haywire we can be pretty sure next summer window things are gonna be different in a positive sense.

I am more concerned about flushing out all these unwanted wastes who dont give a damn . Can the club to do that. Can the club adopt that ruthless approach when it comes to selling.
valencia
cleverly
young
buttner
fabio ( cos he doesnt care about the club any more, which of course is cos of moyes treating him like crap)
anderson
lindegard
fellaini
.........to start with.

The faster we sell these players, the faster our resurgence will be.

Even if we fail to secure any target this month, which most probably is gonna be the case, if we can show the exit sign to valencia and may be buttner now, its gonna make a huge statement.
And the rest should follow next summer.

Should have never fired the backroom staff. Also, Gill was an underrated loss. We couldn't buy anyone nowadays unless we overpay (Fellaini

Since almost everything is lost, why not bleed the youngsters more in the first team? Do it, Moyes.

Former Manchester United midfielder Gordon Hill has slammed his former club, calling this season’s United side ‘mediocre’ and the worst side he’s seen at Old Trafford in three decades.
Hill also believes that Sir Alex Ferguson knew that trouble was around the corner at United last season, and was happy to jump ship leaving someone else to deal with this average group of players.

It's very annoying to see SAF getting all the blame.  It really is.

Fare enough, you could argue some of the blame falls on him, but the majority of the blame lies on Moyes and the players. I don't see how anyone, that watches us week in week out, can blame where we are solely on SAF. I really don't. Even for a transitional season we are doing pretty poor. Is the squad so poor that we can't beat West Brom, Everton, Newcastle, Southampton and Swansea at home? That's 11 points dropped and out of the FA cup. We could've been comfortably in the top 4 and in the FA cup. But no, it's all SAF's fault