I miss ADP so much ffs, we better gie him a testimonial when he retires. Although i'll be in tears


Alessandro Del Piero is back in Italy with Sydney FC, but admits “it’s impossible to forget Juventus.”

The Italy legend flew in from Australia with his teammates, as they will have their pre-season training camp in Jesolo.

“I thank you all,” he told Sky Sport Italia when greeted by fans. “I like being here in a place that loved me and that I know well.

“It’s the greatest thing for me to be with my teammates and all the fans who care for me. I believe it is the duty of a professional to talk to his fans and dedicate time to them.

“My teammates are a little lost at the moment, but they’re working hard. It’s a great experience and a unique one for many of those in the squad. They’re really enjoying it.”

Naturally, many of the crowd who turned up to cheer Del Piero on are Juventus supporters.

“I am enormously happy to still feel loved by Juventus fans. I’m happy with everything I did in the Bianconeri jersey and it’s wonderful to remember it. After all, it’s impossible to forget 19 years at Juventus.”

Antonio Conte’s men have so far lost both their Guinness International Champions Cup games in America against Everton (on penalties) and LA Galaxy.

“Pre-season preparation can have an effect, plus it’s difficult to play well after all the travelling,” mused Del Piero.

“The new buys at Juventus are players of great quality. Juve are in pole position for the Scudetto because they are a well-oiled machine. The others changed a lot and are potentially dangerous. Milan are always a guarantee.

"After all, it’s impossible to forget 19 years at Juventus.”

We will never forget your wonderful years with us Ale.
That goal vs Madrid in 2008 was just exceptional <3 Ti Amo Ale <3

Ultimo giro a Torino, in ADPLOG, prima della partenza per l'Australia.
//
Last round in Torino @ADPLOG, before leaving for Australia. Ciao Ale

The goalkeeper will mark the occasion – matching Fabio Cannavaro’s tally – at the Juventus Stadium in Turin against the Czech Republic.

“Dear Gigi, just a couple of words (unusually in public…) to celebrate a great target that you'll reach tonight: 136 caps for Italy, you have tied the record of our friend - Fabio Cannavaro, the captain of ‘our’ World Cup,” wrote Del Piero on his blog.

“We shared a lot of these presences, sometimes suffering, but mostly getting crazy of joy. Just think of all the unforgettable memories both in Juventus and in the National team.

“I am happy that you can represent the Italian National Team with the captain's armband, achieving this prestigious goal. Good luck to you and the rest of the team for your qualification for Brazil 2014!

If someone doesn't get this man back for good bye match and offer him some role I AM GOING TO SHOOT SOMEBODY !

Alessandro Del Piero
19/9/93, ore 17:38: Trapattoni mi guarda, si… sta guardano me… Mi chiede di entrare! E’ arrivato il mio momento: esce Ravanelli, entro io. Debutto a Torino.
//
19/09/93 5.38 pm: Trapattoni is looking at me, yes his really looking at me...he is asking me to enter the field! My moment is arrived: Ravanelli is coming out, I'm getting in. Debut in Torino. 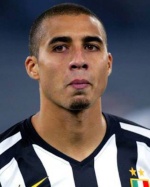 SYDNEY FC not only suffered an embarrassing 4-0 loss to Brisbane Roar last night, but also face the prospect of being without Alessandro Del Piero for next Saturdays derby against Western Sydney Wanderers.

The Italian star was forced off with a calf injury in the 32nd minute of the clash at Suncorp Stadium, but it’s doubtful that even his extended presence would have saved a Sydney side that defended like schoolboys against a rampant Roar outfit.

Del Piero wasn’t the only star attraction who succumbed to injury in the first half of the one-sided contest, with prolific Brisbane striker Besart Berisha replaced after just 25 minutes due to a hamstring injury.

But the Roar coped much better in the face of adversity, with the game well and truly over by half-time.
Brisbane scored three times via Matt Smith, Jade North and substitute Henrique in the ferocious final eight minutes of the first half.

Matthew Smith of the Roar and Joel Chianese of Sydney compete for the ball.

German star Thomas Broich provided the icing on the cake with 10 minutes left as the Roar jumped to the top of the A-League table with back-to-back wins.

Brisbane could have easily scored half a dozen such was their dominance of the Sky Blues, who a week after beating a shocking Newcastle 2-0 were well and truly exposed for the pedestrian outfit they are, apart from one-man show Del Piero.

The Italian superstar limped off just minutes after Berisha was replaced , but just as the crowd of 21,841 were coming to grips with the departures of two of match’s main attractions, the Roar brought them back to life with an exhilarating finish to the first half.


Alessandro Del Piero writes about his career at Sydney FC in his new book. “Australia isn’t just a place; it’s a state of mind.”

The former Juventus legend releases his latest autobiography, titled ‘Playing On,’ on November 20 and some extracts were published by Fox Sports.

“Australia has recharged me and given me what I needed. After leaving Juventus I received many offers, mainly from Italy - far more than I would have expected.

“After nearly 20 years wearing the black-and-white jersey - which Italians either love or hate, but which in any case divides them - I didn’t imagine so many teams would consider placing bets on someone who until a day earlier had been an opponent and the captain of the rival team of all teams.

“Managers, Coaches and colleagues made me feel really flattered. Probably they were hoping to take advantage of any feeling of revenge I might have had against Juventus, but I’ve never felt that.

“You don’t erase the past, or at least I don’t. I’ve always said I’d never play for another Italian team, despite my deep respect for the other clubs. I kept to that.”

Alex looked back on that final match at the Juventus Stadium as “the most spontaneous, sincere and amazing tribute ever.”

He received offers from numerous clubs around the world, but realised it “wasn’t possible” to win any more than he already had done at Juventus and with Italy, so he sought something different.

“Australia stands for a before and an after. Even once I’m no longer here I’ll always remember this interlude as a watershed time in my life, and not only in my professional life.

“From the moment I arrived at the airport and from the first training session, not to mention my first game, I had the honour and the responsibility of being celebrated as an emblem of football and of sports in general, a symbol of the growth of the whole Australian football movement.

“That is no small thing: it's almost the ultimate accomplishment one can hope for in one’s career. Almost, though, because it’s a career that is not yet over. The finale has yet to be written.”

I guess Ale got injured today. He was substituted at 43rd minute

Alessandro Del Piero has ruled out a return to Italy in January, insisting he is ‘happy’ in Sydney.

Stories in the Italian and Australian Press have claimed that the veteran striker could make one last move back to the peninsula over the winter.

But the ex-Italy international has claimed that is not the case.

“I am happy here [in Sydney],” he told Sky Sports. “I am focused on the season with Sydney and have no other thoughts about any other teams.

“My future is here until the end of the season, so for me it is all just rumours.”

https://www.youtube.com/watch?feature=player_embedded&v=aUvRBIkELtg this reminds me of the goal vs madrid  :')

Yesterday at 8:04 pm by halamadrid2

Yesterday at 7:10 pm by rincon

Yesterday at 12:50 pm by BarcaLearning

Yesterday at 10:34 am by Hapless_Hans