my most dear ale take my breath away

watch him score a free kick against us.


Alessandro Del Piero is set to play a few minutes in a Juventus jersey during the A-League All-Stars match.

The Bianconeri legend will lead out the best of the Australian League in an exhibition match in Sydney on Sunday.

According to reports coming out of Sydney, including La Gazzetta dello Sport and the A-League All-Stars, there will be a special moment towards the end.

Del Piero is set to play one more time in a Juventus jersey, switching shirts in the final few minutes.

His last game for the Turin giants was the Coppa Italia Final against Napoli on May 20 2012.

Yesss, i wish its at least 10 minutes.

Alessandro Del Piero turns 40 this weekend and looks on Sydney and Delhi experiences. “I had to divide ‘football player’ from ‘Juventus player.’”

The Delhi Dynamos striker celebrates his birthday on Sunday and spoke to La Gazzetta dello Sport.

“In recent years I’ve united the great passion for my work with the desire to experience new cultures in their entirety. This allowed me to feel at home even on the other side of the world and feel even more special when I do go home.

“The turning point was the realisation I had to divide the concept of ‘football player’ from that of ‘Juventus player.’ I did not even want to try to relive the extraordinary, unique and unrepeatable experience I had in Turin.

“When I chose Sydney first, then Delhi, I embraced a new path both on and off the field.”

Now that he is turning 40, Del Piero was asked which year he’d like to experience all over again.

“Definitely 2006, but not just because of the World Cup. It was also the year I stayed at Juventus in Serie B and I would change nothing about Calciopoli, because we proved that we were there. We got back on our feet.

“When I think of rain, I can’t help but remember Perugia...” he said referring to the game that was suspended for an hour in May 2000, eventually allowing Lazio to win the Scudetto.

“If we talk about difficult moments, then the comeback from my injury was very tough. I had to prepare for a sort of second career which was, in a way, even better than the first.

“Signing the first contract with Juventus was the start of everything. It almost scares me to think of how much my life changed in that magical moment, when I made my dream come true.

“However, nothing and I mean nothing can be compared to what happened that day at the Juventus Stadium. Everything was there and I can try to explain it for the next 40 years without finding the right words. It is all in my heart and will stay there for the rest of my life.”

Del Piero said he couldn’t draw up an ideal XI, but “I always dreamed of playing with Platini and Maradona. I even would’ve allowed one of them to wear the Number 10 jersey!

“I am most proud of my rapport with teammates, as on the field we are like brothers. I am tied to Marcello Lippi by indelible memories, two extraordinary adventures.

“For Carlo Ancelotti I have profound respect and gratitude, as a Coach and as a man. Fabio Capello: two difficult years, but winning ones with two Scudetti.

“Antonio Conte: Not everyone can win as a teammate and then as a Coach in the same club, so the Scudetto was unforgettable.

“Giampiero Boniperti: he’s like a football father for all the Juventini, a continual source of inspiration for me.

“Andrea Agnelli: we both love the same thing, which is Juventus. That’s the only thing that counts.

“The fans: we are tied by deep and infinite love, the greatest victory of my career.”

Alex had said he wouldn’t become a Coach when he retired, but is now reconsidering his options.

“My career as a player is coming to an end. I try to build my future day by day, experience by experience. It is strange to explain: I don’t know what I’ll do yet, but I am learning to do it.”
====
TBH, I almost cried while reading this. Very sensational. Love you Ale. I know how you feel towards Agnelli. Something bitter in our tongue that we all feel. Grazie Ale, e Bon Compleanno 4*10.

salmano9 wrote:
TBH, I almost cried while reading this. Very sensational. Love you Ale. I know how you feel towards Agnelli. Something bitter in our tongue that we all feel. Grazie Ale, e Bon Compleanno 4*10.

actually Moggi said that Conte was the reason for the ADP case...

That's why we all love Alex

salmano9 wrote:
TBH, I almost cried while reading this. Very sensational. Love you Ale. I know how you feel towards Agnelli. Something bitter in our tongue that we all feel. Grazie Ale, e Bon Compleanno 4*10.

actually Moggi said that Conte was the reason for the ADP case...


Naah, I won't believe Moggi's words. Moggi is a fraud. From Ale's words, you can tell that Agnelli was the main cause of his exit, cause he its like Agnelli didn't want to extend for Ale cuz he wants youngsters in the club. He wants to make some development, so this shows that he loves the club.

Is the indian super league over or what?

Messi: "Del Piero is a great player. He gave everything to football, Juventus & Italy. He plays beautiful football and is a man to admire."

Is Del Piero going to watch one of the games?

About Padoin, after the loss from Roma

"He played defense when they asked him to do , he played midfielder , he played striker . What you wish to achieve it . He has never finished in the news for something bad , he never said " no" to the coach . He is a man who earns 800,000 in the team that is charged EUR 117 million . He is not listed for the Champions League? You know what he is? A PROFESSIONAL . It was Simone Padoin . " 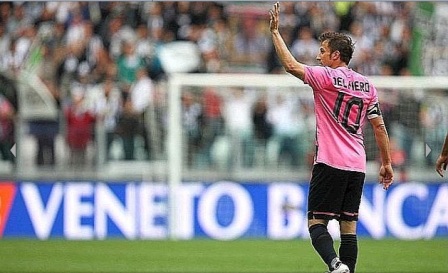 Time flies...we need our president to give him a role in our club management.ASAP!

well he isn't officially retired yet and said he doesn't think he is ready for a director role. He wants to be coach.

well he isn't officially retired yet and said he doesn't think he is ready for a director role. He wants to be coach.


Del Piero never returned to the J stadium after that day, which is really sad

He does not have a good relationship with Agnelli, because they did not let him do what he wanted, to continue playing for us...