@DeviAngel wrote: Marchisio doesn't have the role liek vidal but he is like behind the curtains running the whole show.

@FilthyLuca wrote:You have to watch Marchisio live, and be able to see everything he does off the ball, both defensively and offensively to be able to fully appreciate what he means to the team, Pogbas been great (for his age), but nowhere near marchisio.  If it happened, he'd automatically become the best midfielder in Ligue 1.

@Juveman17 wrote:Are you guys utterly insane? Sell Marchisio? Our next captain? A blanconero born and raised? Never in a million years he is crucial to our team his work rate is world class and his passion and loyalty is sometimg we cannot replace. We must refuse any offers no matter what the price.

so is it settled now? Marchisio is your 4th best midfielder? the googles have been removed? :smh:

Agree with all the quotes you're laughing at. He's just been in poor form lately, doesn't help when he's coming off injuries

Hes in poor form in an attacking sense, but if you dont just watch the ball youd realize that hes still alot more valuable off the ball than Pogba. Hes slowly been getting better though, and if he gets his form back then id say hes better than Pogba for sure. Right now theyre on the same level.
_________________
"I am certain Del Piero really never grows old." - Diego Maradona

Got ruined by injuries. He was our most important player before the ACL tear.

Its fair to say that.

Maybe if he dabbed or had fancy hair, maybe he'd be more recognized down the lane.

Ignoring the fact that this thread was made in the MVPP era and forgetting that when Vidal and Pirlo left, Marchisio had his best ever season in 2015/16 before suffering the previously mentioned injury

Just realized that this thread is almost 5 years old FFS

I think the Sevilla game has destroyed Frenzy more than we actually thought. Gaining pleasure by bumping half a decade old threads and calling himself the prophet ? Unreal stuff.

You've become a shell of your former self, fella.

What Firenze say is true but it seems like the word prophète is being misunderstood here.

Marchisio is a Juve legend for sure, our 1st best midfielder since many years but his career was ruined by injuries. Who could have predicted ?

Pjanic is a great player but he cannot dominate the midfield all by himself. Marchisio can. He is a boss. Sadly i doubt that he's even fit for 20% of our games

Can't rely on him anymore.

is he still a Juve legend? maybe too early to ask in the wake of him jumping ship, but I don't think so

like me saying Owen Hargreaves is a United legend

anyway I wonder why he left - was he predicted to have an injury ridden season again? wages too high and needed them gone?

He didn't jump ship, the club phased him out. Marchisio is absolutely a Juve legend, a huge one. 25 years with the club, his entire life being a model professional for us and before his injury our most important player.

Ronaldo eating up the wage bill

Hope we get Bayern in the R16 so we can keep you irrelevant for another season. 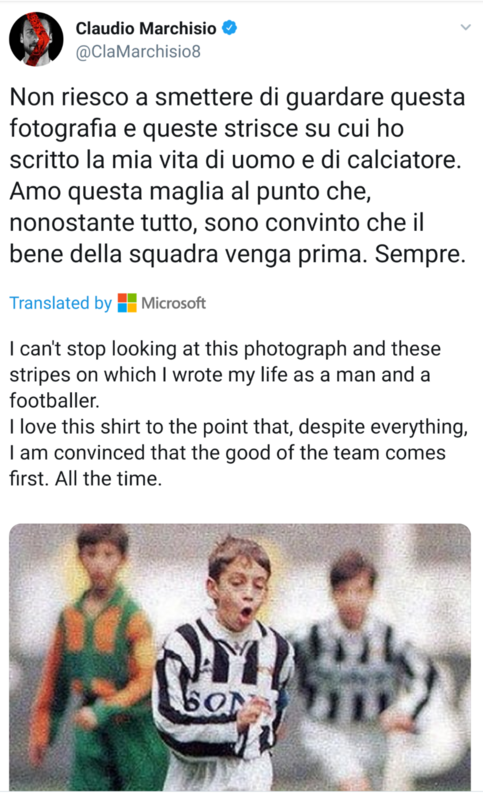 did ya boy dirty ffs

One of the most unanimously loved players at Juventus in the modern era. A Torino native, youth product, who began as a left winger/wide midfielder before dropping into the midfield and forming one of the best midfield trios we've played in Marchisio-Pirlo-Vidal (MVP). He, rightfully, was the longest serving name of the three. We really saw something special in 2015-16 when he changed his role and was our regista with Pogba and Khedira on either side of him in the midfield, it was in this season that he arguably played his best but also this season when he suffered his unfortunate ACL injury. From this moment, we never really had our Claudio back, he's struggled with fitness and struggled even more for minutes as Allegri has elected to go with other names in the midfield.

I think he was expecting another season of similar treatment as we did nothing that would suggest a larger role for Marchisio at this point in his career.

His wages were 3.5M net per year. Hardly a burden on our books.

Infact Pjanic, Rugani, Sandro and Benatia are all signing new contracts with payrises.

The only thing unclear is if Marchisio asked to leave, sensing another season of limited chances or if the club asked him to leave

Either way, it's not the ending any Juve fan wanted

Today at 1:34 am by Robespierre

Yesterday at 8:11 pm by Hapless_Hans

Yesterday at 6:36 pm by Hapless_Hans

Yesterday at 5:27 pm by Nishankly

Yesterday at 4:04 pm by Arquitecto

Yesterday at 8:35 am by iftikhar

Yesterday at 1:27 am by Great Leader Sprucenuce

Yesterday at 1:19 am by Great Leader Sprucenuce