What a way to finish off November. Much was made of Cardiff's home form against the bigger sides before the game, but Arsenal made it look like just another routine away game through their strong defending, organisation, efficiency in front of goal and a bit of luck; just about everything you need to win away from home.

Cardiff set-up as expected, putting men behind the ball and looking to strike on the counter and from set-pieces. What they failed to do in the first half, though, was put Arsenal under any sort of sustained pressure. Right from the first whistle, Arsenal had time to play out the back and construct moves and it would have resulted in a goal, but for the cross bar denying Wilshere's curling effort. It was much the same way for the rest of the first half and we really should have gone in at half time a couple of goals to the good. Giroud had a strange moment of absentmindedness when he was put through on goal but stopped due to thinking he was offside. Replays will confirm that Ozil did get a touch on Wilshere's pass and Giroud was actually offside, but the decision wasn't given and you should always play to the whistle. Ramsey would then have a decent chance later on, but he put his shot high and wide.

Our goal was well-worked, though. Ramsey started the move from deep and Arsenal were able to build without much pressure. Ramsey would then burst into the box to convert an excellent Ozil cross with an even better header.

Cardiff had a couple of chances, too. When Mertesacker was off the pitch, they crossed the ball into Fraizer Campbell, who outjumped Sagna but put his header wide. You imagine that, had Mertesacker been on, that chance wouldn't have come about. Later on, Gibbs dived in rashly and gave a free-kick in a dangerous area. The resulting delivery caused some problems as Arsenal's marking wasn't as good as it should be; it only takes one player to switch off for the whole system to come apart.

Arsenal had to absorb a lot more pressure in the second half. Cardiff played with a bit more energy and had more of the ball, but we're a tough nut to crack these days where even if you get past the defence, you've still got an in-form keeper to beat. Szczesny is making a habit of pulling out some outstanding stops to deny the opposition and he did so again today, getting down low to stop Campbell's header from going in. He was on hand to make a couple of other saves, albeit more comfortable ones, and was alert enough to rush out and mop up a through pass before Mutch could run onto it.

We had some chances to kill the game off, but a combination of tame finishing and some last-ditch defending kept Cardiff in the game. Wenger brought on Flamini and Monreal for Wilshere and Cazorla, who had faded from the game, to sure things up, perhaps accepting the 1-0 win. We do, though, possess an x-factor known as Mesut Ozil, and he produced a brilliant through pass to find Flamini, and he smashed it in to wrap up the points. The third came in the dying moments of the game, again on the counter, this time through Ramsey and Walcott. Walcott was played in and shaped like he was going to shoot, but instead he played it across to Ramsey and he buried his 13th goal of the season.

Some may say Cardiff didn't deserve to lose by three, but when you consider the chances Arsenal had to kill off the game earlier I think we're well worth the scoreline. Cardiff played well and had some good chances of their own, but overall I thought we were in control, with and without the ball. We know exactly how to tackle these games these days and the consistency we're playing well is very encouraging.

We're now seven points clear, having played a game more, with an in form keeper behind a solid backline and a fantastic selection of midfielders. Szczesny was, once again, vital towards us keeping a clean sheet, and how Ramsey continues to turn in performances of this calibre is remarkable. Ozil, I thought, had an excellent game as well. The only real concerns are Santi Cazorla not hitting his stride yet and Giroud not having the best of games up front.

Looking ahead, we've got Hull on Wednesday which could be postponed due to a planned tube strike. Not playing the game would be useful towards keeping the team fresh ahead of that killer period where we played Everton, Napoli, City and Chelsea consecutively, but it would be a great opportunity to give some game time to the likes Vermaelen, Monreal, Rosicky and Walcott and get them nice and sharp.

That's now November, traditionally a difficult month, behind us. We can now go into a tough December with plenty of confidence, momentum and a healthy squad.

Defensively we were *bleep* solid once again, and Szczesny is in ridiculous form right now... some of his saves, clearances are unbelievable. He always had the talent, but now his concentration is at a much higher level than before and it's evident on his performances.

Özil, Ramsey, Wilshere goes without saying were really good but I thought Arteta was awesome today. I'll post some stats later if I find them again.

One more interesting fact: We played against Lewandowski, Reus, Sturridge, Suarez, Rooney, van Persie this month and we only conceded ONE goal against these AND other opponents this month. Impressive innit?

That was an amazing performance. Sure there were scares but we managed it perfectly. Did the right thing at the right moment. Sat back when we knew going forward wasn't an option and then countered when we knew they were tired and out of ideas.

Szczesny was absolutely fantastic. Such a brilliant GK.

Ramsey was the usual brilliant. Joint MOTM along with Szczesny.

Wilshere is back in form. Arteta was outstanding too.

3-0 away to a side that beat City and held United is excellent. Hull next and we will see some rotation. Walcott looked sharp in the last 5 minutes. Got an assist even lol. Will start probably.

Amazing away performance. Solid at the back, so exciting going forward.

Wilshere finding his confidence again, too.

missed the match..
but very happy to see Ramsey back to scoring (even though it is just 2-3 matches) and Ozil getting back to his Ozzists.. and Arteta and the defence is keeping strong..

and that was sheer class from Cardiff fans to applaud Ramsey throughout when they were losing 0-3.. our fans wouldnt have done that..

Great win and another clean sheet.

Szczesny was unbelievable today what a great GK he is becoming. What what was Giroud thinking? 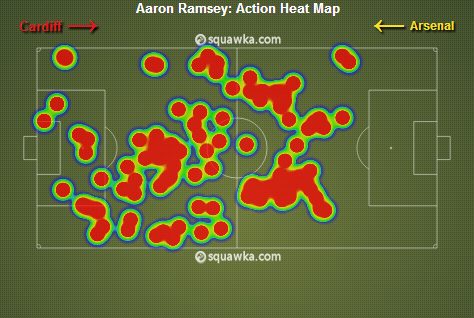 what are the chances of that one getting postponed?

Why would it be?

Oh thought that was on tuesday. Yea it's a possibility then.

Very good result, we won where City and Yanited struggled. I read somewhere that Ozil has the highest number off assist in the league, not bad for someone thats struggling to adapt

And we also lost to Yanited. My point being, it was a good result and everything feels good right now, but its best not to get excited and/or carried away before April/May. Atleast over the next few weeks when we play Everton, Citeh, Partonepei and Chavs.

Cmon Sri, are you telling me we can't get excited and be happy RIGHT NOW because we're doing well? We might not win jack shit this season but atleast we're finally competing again and playing well, let's just enjoy it and not think too far what might or not happen in a few months.

No one's telling you to celebrate the title but we're 7 points clear, 10 points clear of United and one of the most in-form European clubs. At least enjoy it

It looked like they could hit us on the break or of course from a set piece and given that we were struggling so much in the final third (hate to say it but this was mostly due to Girouds unusually poor link up play) to break down Cardiffs deep 10 man wall I'm not so sure we could have clawed our way back into it.

But then the magic of our most in form star and our slightly but maybe not so much out of form star. We all saw the ball when Ramsey made the run but the execution of the ball and our lack of surprise at that execution is part of why Ozil is worth every penny we paid for him and more. Great header by Ramsey and I love his willingness to make those runs, to seize those opportunities by punishing those defensive gaps.. that's what you need if you want to break down teams that park the bus like this, midfielders willing to throw themselves in the danger zones, Ramsey has been adding that extra dimension time and time again all season.

Plaudits to Wol too as he put in a brilliant performance.

Our ability to pull off wins in these types of games with such ultimate comfort despite a testy first half hour gives me great confidence in maintaining this title challenge.

Although he may be forgiven for fatigue, this game for me added fuel to the argument that we may need something more than a striker in Jan that simply offers Giroud some competition.

if we buy a striker in jan and we are still top of the table, then i will start getting hype. and i mean HYPE. lol

It's too early for anything. I'm happy we are 4 points clear ( let's assume Liverpool win tomorrow ) and that too in December but it's too early.

you guys are fickle bunch, sure we might not win anything but these November performance is something every gunner should enjoy, best since like forever. I'm confident we will be in the running and as long as they are, I'm happy with Cardiff like performance week in week out.

My own personal checkpoint for judging our title credentials was 15 games, but you can't be seven points clear at this stage and not be considered title contenders. Sure, we can hold off saying we'll win the title because there's still such a long way to go, but we can be excited about actually being genuine contenders for a major trophy for the first time since 2011, and feel hugely encouraged by the way of the team is playing right now.

Heh yeah i know,Wenger has made us all becoming too cynical over the years. Maybe not a title running but i'm excited with this kinda good run of games, solid and joyful to watch, not that often last 2 years.

Also like it how we moving away from possesion football, the less we had, the better results.

That's being said we need back up for Giroud asap. I'm worried the way he thrown his body in and committed 100% every game, winter cant come soon enough.

Similar topics
» Arsenal 2 - 0 Cardiff City: The return of the Greatest Striker to ever Live
» Cardiff City could change colours from blue to red
» Congratulations Cardiff City
» Cardiff vs Arsenal
» Arsenal Vs Cardiff

Yesterday at 11:27 pm by Nishankly

Yesterday at 3:02 pm by Firenze