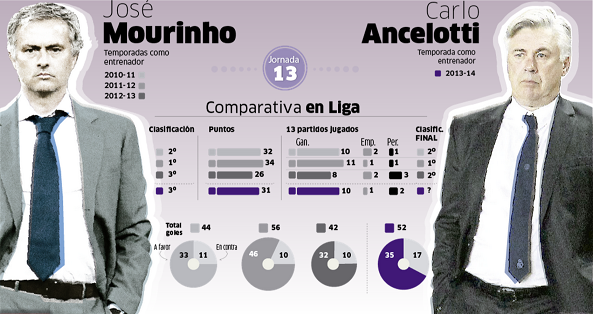 We can't really extract any conclusion from that. Only that Madrid's defence under Carletto is worse than under mourinho.

Ancelotti: I was brought in to play free flowing tiki taka and that is whatI will do...

He has lost La Liga in October like Mourinho. They are quite compareable.

Come at me, GL jinx.

Is their a translated version of the image?

Figuring out that comparison gave me a headache

What stands out to me as well is that Mou had a completely healthy squad (other than Kaka, but who cares with Ozil) while Carlo dealt with injuries to Alonso, Varane and Bale.

Your hatred of Mourinho influences your judgement here greatly. I don't even need to look at La Liga point stats. Madrid and Barca can win most games in La Liga on talent alone even when not playing well. Tito's Barca last season: 100 points. Pep's Barca in 08 / 09 which won the sixtuple: 87 points. Means nothing.

What I see with Carlo with my own eyes is how poorly organized Madrid look in midfield and defense which is solely down to him and his 500 different formations without any sort of continuity and how he got tactically embarrassed in El Clasico by playing Ramos in midfield to kick Messi around ... but Messi wasn't even playing in the middle. Outsmarted by a Europen rookie before the game had even begun.

Also the current point tally doesn't even reflect the reality. Madrid haven't won a single away game by more than 1 goal. That Elche game was proper robbery and scoring 2 goals in the 90th minute against Levante didn't look like a tactical masterpiece either.

Different circumstances as well. Mourinho took over a team that used to crash out in the round of 16 in the CL for 8 consecutive years. Carlo took a finished product that was top 4 and got a blank cheque to buy Isco, Illarramendi and Bale.

Oh, yeah. And he got rid of Özil because he is "better than Di Maria" but doesn't have the "character" to become the bitch of Perez' newest toy and sit on the bench for no reason (unlike Di Maria).

I will be amazed if Carlo wins a single trophy with Madrid. Even in a season in which Messi gets injured every 2 games. Perez needs to stop buying coaches just because they have won a CL some decades ago and start thinking in footballing terms. Carlo doesn't fit Madrid at all.

You obviously haven't watched us since Alonso has returned and Bale is on the wing... night and day. Varane has helped organize the defense too since he's a tactical guy as opposed to the reckless styles of Pepe and Ramos.

Another big adjustment imo is that Arbeloa is moved to LB (with Marcelo and Coentrao injured) and Carvajal is starting on the right. CR7 needs a more defensive guy behind him while Bale tracks back a lot more and, thus, a more attacking fb is better on his side. Not saying Bale is a good defender... but he gets in the way at least. That's what you want.

jibers wrote:Ancelotti: I was brought in to play free flowing tiki taka and that is whatI will do... 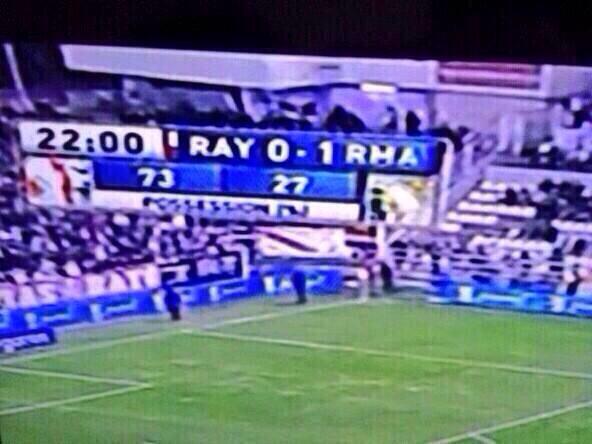 that was in the 22nd minute

And almost everyone wanted to "kill" Tata for that reason..

Similar topics
» la liga should embrace the scottish comparison..
» Squad Comparison
» Comparison of the leagues with respect to the goals scored
» Exhaustive comparison of CR and Messi as goal-scorers
» A Graphical Analysis of attacking and defensive effectiveness among Europe's top divisions