Chelsea Football Club is delighted to announce an agreement to sign Bertrand Traore.

The 18-year-old has agreed a four-and-a-half year contract.

Traore, joining from Association Jeunes Espoirs De Bobo-Dioulasso, is a full international for Burkina Faso having made his debut in September 2011 a few days before his 16th birthday, and he made one substitute appearance at the 2012 Africa Cup of Nations. He has 10 international caps and has scored once ahead of next month's World Cup qualification play-offs in Africa in which Burkina Faso face Algeria.

In 2011 he helped his nation win the Africa Under-17s championship.

An attacking midfielder, Traore was taken as a trialist on Chelsea's tour of Asia in the summer and played a part in all three games, scoring in Malaysia and in Indonesia.

This is exciting. He was very impressive in pre-season

Mourinho talks up Bertrand Traore signing:
Jose Mourinho has described new signing Bertrand Traore as “one of the best talents of his age”:
http://espnfc.com/news/story/_/id/1601962/jose-mourinho-talks-abilities-new-chelsea-signing-bertrand-traore?cc=5901

"He’s a great talent, that the club has followed for a long time, before me, that I wanted to take to preseason, to have a view of two, three weeks and play with us and play in front of important crowds, of 60,000, 70,000 like we have in Asia of course against easy opposition but some situations hard for a kid."

"We think the kid has a bright future so we could get him. Of course we could get him. We have to wait for other things, work permit, so on and so on but we have a kid that is in our opinion is one of the best talents of his age."

"He has [made an impression] in preseason. I keep saying, against nice opposition, but he was making this impact. He has played since he was 16 in his national team and African national teams are good sides, especially Burkina [Faso] is a side with talented players."

"It looks like mentally he’s also very stable. He comes from a family of footballers, the father, the brother, so I think it’s his natural habitat, the kid looks very comfortable and good players they have no age. I think the kid is ready to make an impact, yes."

Between all the talented young players you guys got , which one do you see making the 1st team and be regular starter or even the bench ?

As talented they are i honestly don't see many of them being starters soon because they need to play in order to be good but chelsea's starters right now are almost all young bar the defenders.

It will depend largely on how much the club want youth players to come through, which they've not since Abramovich took over. Without a commitment to at least some youth integration, I wouldn't be surprised to see none of them, save for probably Lukaku, ever play for the first team. But if they are serious about it, as Mourinho is continually saying, and as the club would seem to be based on their actions of the last few years, I think it's fair to say Lukaku (inasmuch as you can even call him a youth player) is virtually a shoe-in, I think Chalobah has a very good chance, possibly one of the other youth strikers - most notably, at least at this point, Bamford - perhaps one of the 2 highly promising English CM's in Baker and Loftus-Cheek. Kalas and/or maybe even Aké, perhaps. All realistic candidates. But beyond that, it's hard to see any being prioritised over just going out and blowing big dosh on an automatic, ready-made place-taker for a particular position that needs filling. Piazon's fate, sadly, is as good as sealed with the pointless stockpiling of big-money attacking mids, McEachran has severely stalled for someone once so promising, etc.


It's tough. The talent is there (and has been stretching back years), it's just up to the club to decide where its priorities lie.

Yeah, it's tough to know, especially with AM's as we're so stacked,

We currently have: Hazard, Oscar, Mata, Willian, Schurrle, KDB, Traore, Kakuta, Atsu, Piazon, Izzy Brown and Boga (off the top of my head) Who could all potentially or are currently good enough to play for the first team. All of these players are under 26, so our first teams won't be moving anytime soon.

It's possible that none of these players (save the first teamers) make it due to the congestion in this position.

The only players I think will actually make it are: Lukaku, Courtois, Kalas, Chalobah, Ake.

Best of luck to him, I think he'll do well. 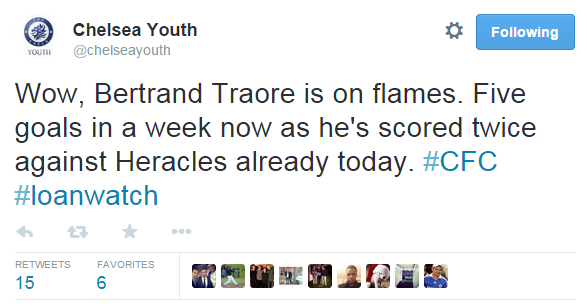 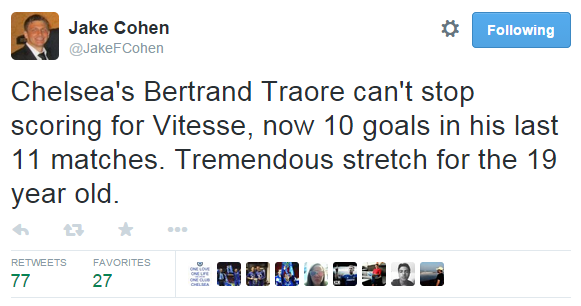 I've noticed that, great for him. He could be a great player in the future.

If he can't even get a single minute on the pitch with all 3 strikers out, what in hell was the point of keeping him back with the first team this season?

Well our manager was the youth killer Mou so...

Also Gus really pissed me off today with his shitty subs.

You mean his shitty non-subs. Attacking players stinking out the place while Kenedy and Traore watch from the bench

Lacking quality and competence on the ball, so he brings on......Ramires

RLC on for 38 seconds

Bottom line - he played for that putrid goalless draw. Game was there to be won if he wanted to show a bit of courage and go for it but he was content to stick with the turgid mess that was somehow succeeding at keeping them out to hold on for the point. Pathetic.

It was brutally obvious we needed someone taller than 5ft8 in our attacking front, but Guus just sat there old *bleep*.

No wonder Holland didn't qualify for euros under this mugs reign.

I would've liked to see him come on to replace Oscar, move hazard back into midfield. I understand why he was cautious, we suck so bad that he had to be cautious.

Such a promising player last year. Disappointing he seems to be following the Atsu model.

Mourinho and Guus almost ruined him.

At this rate, he will replace Flopcao or Pato as a back up CF

Page 1 of 2
Permissions in this forum:
You cannot reply to topics in this forum
Latest topics
» The Official WWE Thread - Part 34

Today at 7:02 pm by LeVersacci

Today at 6:56 pm by RealGunner