Obviously, it would be silly to just stop the clock whenever the ball is out of play for 2 x 45 minutes. That would drag it out too long. So the idea is to look at games through the major leagues and find out what the average time is per game that the ball is actually in play. Then you need to add a couple of minutes due to the fact that that number is skewed a bit due to the excessive time wasting which is not recovered at the end of quite a few games. Once a good time has been found, simply stop the clock whenever the ball is out of play. I came up with this out of boredom, but what do you think? It would be much fairer and eliminate a lot of rolling on the ground at the end of games. Referees shouldn't have to worry about how much time is left. They should only have to worry about calling fouls etc. 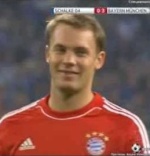 games will; finish in 4 hours

stopping the clock whenever the ball is out of play or when there's injuries is the most effective method. It works really well in Aussie Rules Football, though probably wont work aswell here since there's too many gimps that rolls 50 times after a legit tackle.