Which quartet is better? 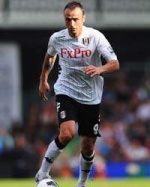 Not a fan of Gotze.. Put Muller instead of gotze..
Ribery-Muller-Robben

How are we suppose to know when Bale is yet to play for Real?

And Gotze has barely played for Bayern as well.

I'm going with the bayern trio. Ronaldo is the best of all six players. but Bale and Isco as not as good ribery, robben or gotze.

Can't compare them atm.
I have seen Gotze just for a few minutes while still waiting to see Bale.

Since both teams are rotating their players pretty well, I added in Muller and Di Maria. So which attacking midfield is better now that we're not far from the half way point of the season?

Madrid's is better. The difference is that Madrid is playing 4-3-3 at the moment and the attack is BBC and Modric is playing in midfield. Both Isco and Di Maria are subs like Gotze

Bayern by a mile. Bayern's has won trophies, Madrid's has won *bleep* all. As a unit that is all you can go by.

Sometimes I get a feeling Juve101 likes Bayern players and them being appreciated and hence makes these threads.

Its the Bayern one by a mile. Ronaldo is the only Elite Player while Bayern will have Robben-Ribery-Muller is B D'or Top 5-6 while Goetze is the next Big Thing in World Football.

Maybe if Bale settles and does brilliantly and if Madrid had Ozil-Ronalod-Bale + Isoc or Di Maria then maybe it was a comparison.

Well both are great sets of players. The Bayern ones for me, though, since I think Bale and Ronaldo lack flexibility (even though both are unbelievably great at their narrow roles), while Götze and Müller are just a notch ahead of Isco and Di Maria, those two just don't have the mental superiority of Müller, or the creativity of Götze.

But frankly, either of those 4 could carry a team to a UCL title, it's mostly just a matter of team chemistry IMHO.

Similar topics
» Ribery vs Ronaldo vs Robben
» How does a Ronaldo, Bale, Isco, James combo work?
» Isco vs Gotze
» Di Maria vs. Ribery
» Robben vs Ribery