About that Nzoni thing,I hate the way he held our cou, cute boy...that was really disrespect and it was almost a slap on Lucas's face...wanted to post about but didnt want spoil the early joyful mood!!! I dont how harsh it is for FA to take some action about it

edulfc wrote:arsenal loosing and an everton draw. Will this weekend get any better!!!

exactly!!!!
Btw, I realised later why Sepi must have said that Arsenal should win today, now they will be more vigorous in attempting to bring more players in the window 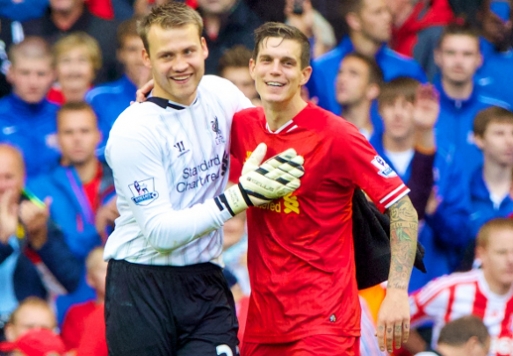 Dagger, love you...my role model if I had to be a defender

Really sums up the great enthusiasm within the squad!! The celebration after the Sturridge goal!!

stivie u seem to be that sharp nerdy boy from school, yaaaay

GIVE ME THAT AVATAR ffs

HEIL MEIN REDS wrote:exactly!!!!
Btw, I realised later why Sepi must have said that Arsenal should win today, now they will be more vigorous in attempting to bring more players in the window

the last time arsenal made a flurry of buys towards the end of a transfer window they were mostly crap. Panic buys rarely turn out good. So its still in keeping!

There aren't really any great targets left in the market. I'm really glad they dropped some points. Now they are already playing catch up to us.

McAgger wrote:There aren't really any great targets left in the market. I'm really glad they dropped some points. Now they are already playing catch up to us.

You're right, but that just makes it more likely that they'll register late interest in the same players we're after. Hopefully we can tie up our final couple of deals asap so that they don't end up getting complicated with other clubs attempting to move in.

The best thing i see coming out of last nights game(still haven't watched it yet, planning on to today) is the unity the team possess. It actually looks like each player wants to fight for each other on the field and for the club. I'm just so stoked, if we can maintain this energy within im sure we can produce more often on the field.

(He struggled against the height of Crouch, but it's so assuring that you faith in your keeper to keep a clean sheet. That double penalty save.

RedOranje wrote:I was wondering how long it would take someone to pull out random excuses to write away a great performance by Toure.

He did well. But it's only one game, yeah. Plus, it doesn't even sound like Art was criticising him.

McAgger wrote:There aren't really any great targets left in the market. I'm really glad they dropped some points. Now they are already playing catch up to us.

Injury riddled team.
No reinforcements.
Massive game for them on Wednesday. There is a chance they'll fail to make CL.

Dirk Kuyt to header Arsenal out of the CL.

Tbh Hendo has really good movement for a midfielder. Got into such great positions.

Also the way Mig told everyone to stop celebrating with him and defend the corner.

Wasn't it Hendo who almost scored with that shot that hit the post? Yeah, he had a good game, making runs into the box while Gerrard stayed outside it.

Initially it looked like Hendo was himself shocked by his selection, for starting few minutes he looked lost but then as game progressed he started 'the Hendo bossing'

Hendo had two shots that were from very good positions and both could've been goals in their own right... one he put right on the keeper and should've done better, the other was perfectly placed in the corner and Begovic made a full stretch save to barely tap it off the post. Unlucky for him there, and I would've loved to have seen Hendo go insane yet again for a goal celebration. He had a good game from my eyes, and I hope he keeps starting.

I remember 3 chances he created. First was the pass to Enrique who missed, Second was the counted assist to Danny, Third was the neat cut back to Henderson who hit the post.

That guy is the real deal, ffs its his first PL game, He was in Spain's second division 2 years ago ffs.

get in there a good win to start the season:cheers:

Very happy with the performance on Saturday. Rodgers, who has become my hero over the summer in the way he has handled the Suarez saga along with his subsequent leadership, has shown brass balls in fully evolving his scrapped possession side, into a 4-2-3-1 counter-attacking side to which just suits us so much more.

Unlike last year where we were romped by West Brom with a lethargic & apathetic performance, we showed excellent character & energy to cover all sides of the pitch in what was a squad brimming with desire to prove their trade for a starting spot.

Glen Johnson was one of our most impressive players as despite having his occasional "freezes" in the final third, he defended well & pulled some magnificent pieces of skill. Jose showed a more industrious side to his game by an efficient exploitation of the flank by running up and down the space well and utilizing space very well.

Our CBs were perfect aside from Kolo looking physically a bit out of shape, while Daniel Agger committed on of the most daft handballs I have ever seen.

Lucas was brilliant. Position, recover, pass and repeat recycling. Game passed him by since Stoke resorted to hoofing over his presence yet his positioning was immaculate.

J.Henderson showed excellent positioning and improved ability within tight spaces coming in from the right of the '3' in 4-2-3-1 yet its clear the RAM position is not his given his lack of ability to cut in and provide width when needed within the respective position. Centrally he will excel far more.

Coutinho was impressive with his industry & skill drifting out from left in a Stephan El Shaarawy/Reus type role. Yet still showing how tactically raw he is. Within Serie A that facet was exposed as he often dwelled on the ball to often yet the running game of PL somewhat excels to his strengths. Aaspas played directly behind Danny, and while looked lost at times (understandably), looked wonderful on the ball and showed terrific understanding with our front flank in creating over 3 chances. I said it once, and will say it again, Iago will be a fantastic signing for us.

Sturridge was and is what we needed. Tactically he is sometimes a headache with his decisions & can be quite selfish at times, yet that IS WHAT WE NEED. We cannot be like Italians in having too many selfless playmakers up front as despite all the maddening moves of Danny, we need his SELFISH & Raw Ruthless desire to score goals. His insane piece of technique a testament to his confidence and desire to prove himself over Suarez and for Liverpool. I said last year he has massively improved his right foot yet today he showed many weaknesses with it as attempting some repetitive moves & daft misses yet it can be forgiven due to the early season rust. Borini can provide a different outlet with his superior intelligence and ambidexterity once both are hopefully integrated perfectly.

MOTM was Steven Gerrard by a mile. Brimstone of passes to which blew my mind. Ran the midfield show, took the game by the balls, thrived in being Steven Gerrard.

Very happy with Mignolet. Shaky game OVERALL yet impressed by his command, initiative and he did his homework by studying Walter's penalties, who has shown to hit them ALL on his right of the post. What a moment it was when he saved it, thus saving our first game of the season. The manner in which the players ferociously expressed their gratitude was heartwarming as you can see how buoyed Simon was by that gesture. In a way, it was perfect as his somewhat shaky performance was enough to keep him on his toes, yet the penalty save has won his teammates and Kopite faith.

One thing he lacks is Pepe Reina's control with the ball, to which is harsh as only Buffon, Valdes, & Neuer are in Reina's tier of control and distribution.

Overall, our propensity cannot be measured to to how utterly poor Stoke City were tactically & individually. Mark Hughes is such a mediocre tactician as I'm surprised he doesn't even use his players to his strengths. If not for Azmir Begovic's heroics, we would have been up 4-0, exposing how poor Stoke City are.

Nevertheless, happy to get our first season win after what seems like 15 years of no luck in that position.

Very happy with the boards enthusiasm and analysis. Great to be back.

I remember 3 chances he created. First was the pass to Enrique who missed, Second was the counted assist to Danny, Third was the neat cut back to Henderson who hit the post.

That guy is the real deal, ffs its his first PL game, He was in Spain's second division 2 years ago ffs.

I read that he was a ball-boy in one of the liverpool match, when he was a kid

If it is true, what a journey for the guy, seems destined for some glory with us

vegfootball wrote:i miss the match & most of match of day, what were they talk  about 2001????

vegfootball wrote:i miss the match & most of match of day, what were they talk  about 2001????

Yesterday at 8:59 pm by BarcaLearning

Yesterday at 1:40 pm by Warrior

Yesterday at 1:00 pm by McLewis

Yesterday at 12:00 pm by BarcaLearning