I hope that quote doesn't come back and embarrass him one day lol.

But great to hear/read. 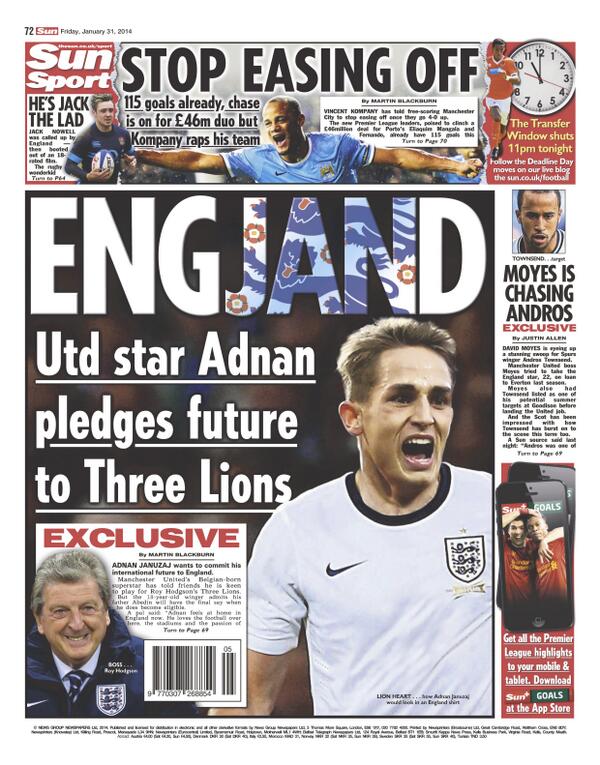 pretty sure he's not eligible to tho....

I'd love it if he did (obviously), but he's not going to wait 5 years. The Sun need to think of better stories.

Completely agree BB. He would be ill informed to wait 5 years just so he can play for England, when he can opt to play for a superior Belgium team right now.

I hope he takes his time and concentrate on United though, there is no rush at all for him when it comes to international. We all know he is good enough to walk into any national he chooses, whether now or in the future.

Yep, I hope he does take his time. He could potentially be in Belgium's World Cup squad. In his first year of proper football, I hope he doesn't go, he should wait, he needs a proper rest for next season and a world cup won't help physically or mentally. That's not just from a Man Utd point of view, but for him also.

Not sure if Cristiano or Januzaj

He's 19 today it's going to be incredible to watch him grow.

We have a special talent. So lucky to have him. Great video

Januzaj's made it into Belgium's inital 27 man squad for the WC, it will be cut down to a final 23. Kevin Mirallas is mad

Januzaj has impressed Wilmots: "He can play on the wing or even as a 9. Interesting as Christian Benteke will be unavailable. National manager Wilmots on Januzaj: "I want to see him on training and see how he behaves. He has to prove himself on the pitch." (HLN) 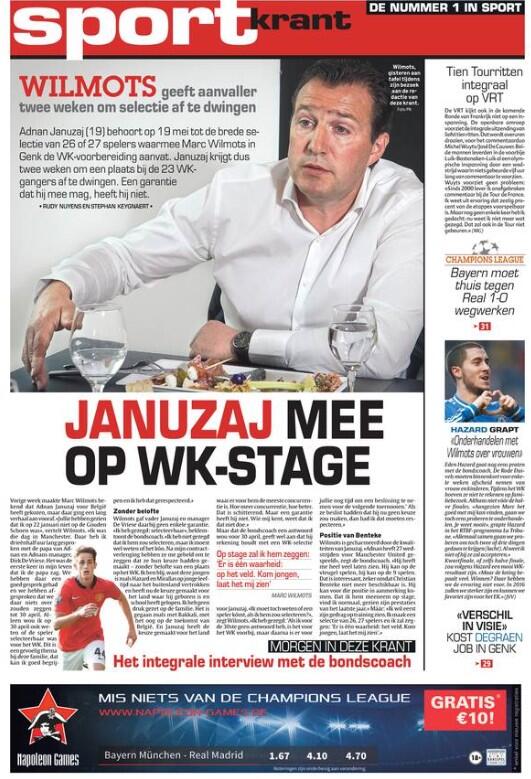 my Januzaj jersey came in the mail yesterday

I hope he gets no.7 next season, Valencia has lowered expectations in it so no pressure on Januzaj. Maybe 11, it would be nice if he gets 11 actually. He would be a suitable heir to Giggs not like Young to Scholes' number

Moyesie rejected Ronaldo last summer, because he needs to scout him x1242323 first

Everton forward Kevin Mirallas has been told to keep his opinions to himself by Belgium manager Marc Wilmots after he questioned Adnan Januzaj's World Cup credentials.

Manchester United winger Januzaj, 19, declared his allegiance to Belgium last week, ending a season-long saga in which England, Albania and Kosovo had all expressed an interest in his services.

But while Wilmots welcomed Januzaj's decision, Mirallas was less accommodating.

Mirallas, 26, said: 'I don’t think he should go to Brazil. It would not be fair to leave out another good player for someone who does not know the others and has not played a lot for his club in recent months.

‘Adnan does not know the group, and the fact is, he has not had much game time at Manchester United lately. It’s not as if we are short of good players in that area of the team. In fact, there are a lot of good players in his position in the Belgium squad, so it is going to be difficult for him.

‘He has yet to prove at United that he can be their No 1 asset in his particular position. I think for him, the European Championships in 2016 would be a more realistic target.’

But, a day after confirming Januzaj will be in his preliminary squad to go to the World Cup, Wilmots hit back at Mirallas.

Wilmots, a former Schalke and Belgium midfielder, told Voetbal International: 'He (Mirallas) also said that if a striker is needed that Jelle Vossen (of Genk) could be likely. That's not his job. For this, he should be silent.

'The rules are: you have to talk about yourself, but not the others. On the selection I decide, Kevin may have his opinion, but he should not talk about others, or how new players like Januzaj can affect the group atmosphere?

'Stop talking nonsense. We have never had a problem when there is a new player. For Januzaj that will not be a problem. He has an exemplary attitude.'

Mirallas, who was 46 caps for Belgium, was a key member of the squad which qualified for the World Cup with ease, finishing nine points clear at the top of European Group A.

Januzaj was born in Belgium to a Kosovan-Albanian family. He joined United from Anderlecht in 2011 and broke into the first-team earlier this season.

Mirallas you scared of becoming a bench player?

He is incredible. Everything about him screams 'potential world class'. Will only get better, for at the moment, he is displaying genuine first team quality in his debut season at the tender age of 18/19. He was the one dragging us through with his inspiring performances when many of our first team attacking players were missing. And for me, he has been the most positive highlight of the season.

But I worry for him. He is not getting enough protection from vicious c*nts. Thugs who have trouble dealing with him on the pitch, so they resort to disgraceful methods to ruin him. That's the 2nd time an inferior POS player has tried to break Adnan's ankle.

There's also been countless times he's been brought down by players, only for the ref to not give the foul. Today he was brought down in what should have been a penalty. Worries me that he's getting a bit of rep due to his early dives in the season (which I am pleased to see he has cut down on).

Beyond all that, we have a special player who will only get better. I think he will feature as one of the first names on the team sheet next season.

I felt bad for Adnan he's just a kid at least if it was Rooney/Rvp they are able to defend themselves. I hope it gets reviewed and Meyler is suspended for the FA Cup Final even though I'd love Steve Bruce to win it. We need a Robbo/Keano type figure if any oppo player tries something on one of our players they'd know they'd be getting it. 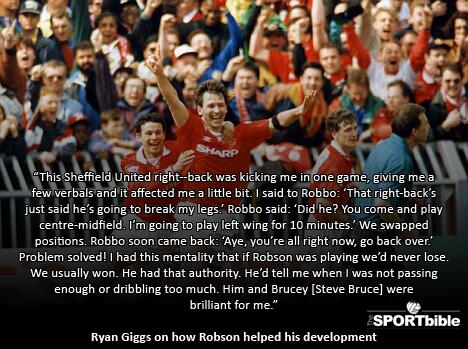 That was a great little read. Robbo (salute) that's a great example of leadership.

Januzaj was deservedly voted MOTM by the fans. 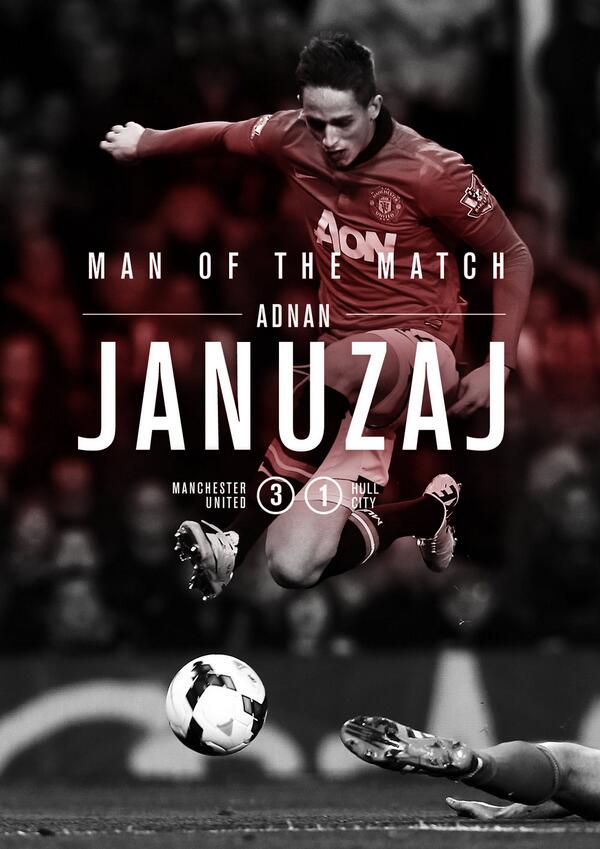 It gets worse every time you watch it

His shin pads probably saved him

how is Januzaj now after this bastard "tackle" ?
I like in this guy .
(the only good thing made by Moyes

He carried on running after that tackle. Giggs said he saw Januzaj's leg after the game and there was a cut from his knee to his ankle. I don't know how he carried on playing

Adnan's going to the World Cup.

prospect of hazard and adnan on the field together.

The kids potential is very high. With van Gaal coming in, he will find his absolute best position which he can fully apply his skill set to. Needs more minutes. With Rio gone, hopefully we can get rid of some more dead weight.

Belgium fans voted Adnan Januzaj man of the match against Tunisia after he replaced Eden Hazard with just 15 minutes left.

Today at 6:41 pm by BarrileteCosmico

Today at 5:25 pm by alexjanosik

Today at 12:58 pm by BarcaLearning