It's April 2003, and Real Madrid are in town. Manchester United trail 3-1 from the first leg and are looking to the Champions League to save their season. They're chasing Arsenal in the league, the Gunners have already knocked them out of the FA Cup, and, just one month previously, Liverpool beat them in the League Cup final in Wales. Sir Alex Ferguson, according to one BBC journalist, "must sometimes wonder if he did the right thing in changing his retirement plans."

And then, to the astonishment of everyone, Ferguson drops David Beckham. The golden boy of English football, the man who sent England to the last World Cup, the free-kick maestro, the really, really, ridiculously good-looking superstar, is forced to sit on the bench with a face like a slapped bottom.

United give everything they have and win the match, but they can't overturn Madrid's lead. Beckham arrives late in the game and lashes home a free kick before adding another from close range in injury time. He walks off the pitch believing that he has made his point. In fact, it's Ferguson who has made his: No one is bigger than the club.

In Beckham's case, Ferguson was increasingly concerned with his lifestyle. As a single man, Beckham was focused, a model professional. As one half of celebrity couple "Posh and Becks," he was distracted -- and a professional model.

Two months earlier, after a home defeat to Arsenal, Ferguson had kicked a stray football boot in rage and it had hit Beckham in the face. Beckham, ever the PR man, responded by arriving for training the following Monday with his hair held up by an Alice band so that the photographers could see his butterfly stitches. The relationship was breaking down.

The very idea of selling Beckham was, from a business perspective, quite insane. There was no product in the world that the club wouldn't have been able to sell if they'd stuck a picture of Beckham's face on it. In 2003, English football was on the rise, gaining ground on Serie A and La Liga, while Beckham was Manchester United's very own Royal Mint, clanking out money morning, noon and night. But from a football perspective, Ferguson felt that he was undermining the team, and Ferguson's word was law. Beckham left that summer.

There were many reasons for Ferguson's extraordinary success, not just with United, but in Scotland, too. His ability to stay ahead of a changing game, his forceful personality, the siege mentality he fostered every season -- all of it was all critical to his success. But nothing was as important as his ability to make the big decisions for the sake of the team, not the individual.

In 1986, as caretaker of Scotland, he left Liverpool's Alan Hansen out of his World Cup squad because of lingering doubts about the centre back's attitude. In 1990, he dropped goalkeeper Jim Leighton after a poor performance in the drawn FA Cup Final against Crystal Palace and played his understudy, Les Sealey, in the replay. In 1995, he sold the engine room of his midfield, Paul Ince, after, among other things, the former West Ham man insisted on being called "The Guv'nor" by his teammates.

Jaap Stam was sold in 2001 after his autobiography broke the omerta of the dressing room, though Ferguson would later insist that it was a football decision. In 2005, Roy Keane was released after eviscerating his teammates in a scorching interview on in-house TV station MUTV. Prolific goalscorer Ruud van Nistelrooy's inability to get on with Cristiano Ronaldo cost him his Old Trafford career in 2006.

But he wasn't simply a dogmatic disciplinarian, robotic in putting club before player on every occasion. Sometimes, very rarely, there were special cases. Sometimes, Sir Alex had to know when to let the leash slacken. Eric Cantona's idiosyncrasies were quietly indulged, Roy Keane's dressing room outbursts were -- until they were made public -- absorbed and Wayne Rooney's 2010 machinations were brought to a halt with the application of a very generous contract.

Thirteen Premier League titles and two Champions Leagues studded an impeccable career as Man United manager.
This was the side of football management that can never been replicated by a computer game and that no coaching course could adequately teach: the careful, but decisive, management of men. Some players need to be cuddled while others need to be clouted, but, at a certain stage, they all grow old or truculent and need to be moved on.

It was fitting that one of Ferguson's last acts as Manchester United manager was to drop Rooney from the match-day squad for his final game at Old Trafford. Despite playing for much of the run-in with all the elegance and finesse of a man wearing wellies, Rooney never believed that he might be deemed surplus to requirements. Ferguson simply dumped him, told the press that he'd asked for a transfer -- something Rooney strenuously denies -- and then moved on. Another superstar put firmly in his place.

Football is not a simple game anymore, not now that scouting networks are expected to cover more than a 30-mile circle around the club and that you need a degree in accountancy just to work out a player's contract. But some things will always remain the same: The ball is round, the pitch is green and fortune favours the brave.

Ferguson’s greatest weapon was his fortitude (grit, courage, defiance, etc). No public opinion could sway Sir Alex, no celebrity profile could impress him. Right to the end, as the song they played for him on his last day at Old Trafford said, he did it his way. 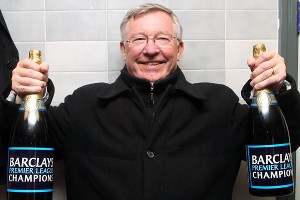 Great article. He will be missed

Enjoyable read. There were times when I really disliked his behaviour and the things he said, particularly baiting refs and officials, but he did a marvelous job of ensuring that Man Utd's interests were paramount and a terrific job of delivering success.

I wonder sometimes if Beckham regretted being more interested in promoting himself and his brand than focusing of performing for Man Utd. Fergie's swift and ruthless way of dealing with him was admirable, I've never seen that since in football.

Moyes has got a difficult task on his hands taking the reigns that's for sure.

I already miss him a lot