Was just watching Archer just realized that person who plays lana in Archer is the same one who presented the Ubisoft Event.... she is annoying is real life too

Good stuff CB. Once you catch up with BB, get on Justified ASAP. It's rated higher in my list than both House of Cards and BB.

Had its moments, but never had staying power.

If there's one reason to watch Chuck, it's for Yvonne Strahovski. You won't be disappointed

Is Doctor Who worth watching? I watched the pilot of season 1 and it was garbage. Should I give it another shot?

I enjoy Doctor Who a lot, but it isn't everyone's cup of tea, and if you didn't like the first episode of the new run of Doctors I would wager you aren't going to like the show much.

@McAgger wrote:Is Doctor Who worth watching? I watched the pilot of season 1 and it was garbage. Should I give it another shot?

Keep watching it a bit and you might like it, the pilot isn't the best, it more of an introduction to him and Rose, its gets a bit darker in the first season, probably the darkest out of them all

I think the first season (of our generation) is the most powerful in terms of how the series builds the seriousness of the relationships that the rest of the series will be built upon.

The season finale of the first season was probably one of the most moving moments of television I've ever seen.

He will always be my favorite Doctor:

Started watching Vikings a week or so back, just an episode in the evenings.

At first I was like meh, but now I'm really into it. Got one episode left. Hope they make more seasons.

Yeah Vikings has already been renewed for a 2nd season. Top show, that.

Without anybody saying any spoilers, was Episode 9 the last of the series? Been on 9 for ages although I haven't checked in a while.

The first full trailer for writer/star Larry David’s new HBO film Clear History has made its way online.  Larry David stars as a marketing executive at a start-up electric car company who gives up his ten percent of the business after a petty argument with his boss (Jon Hamm). The company subsequently makes billions of dollars, destroying his life and leaving him publicly humiliated. Ten years later, after changing his name and moving to a small island off the Massachusetts coast, all is well – until something from the past threatens his new life.

The trailer makes the film look like a feature-length episode of Curb Your Enthusiasm, which is in no way a bad thing, and its prospects are buoyed by promising appearances from the likes of Danny McBride, Bill Hader, and Michael Keaton. Directed by Greg Mottola, Clear History premieres on HBO August 10th.

Some authors write their protagonists as wish fulfillment, but Ian Fleming was able to use his life experience working in British Naval Intelligence and as a journalist to create one of the coolest and most memorable characters in fiction, James Bond.  It’s true that Bond is a darker character in Fleming’s novels, but there are still the trademarks that made him popular, and some of those traits came from the author’s life.  Now that life has received the biopic treatment in Sky Atlantic’s four-part miniseries, Fleming.

The four-part miniseries looks like it could be interesting.  It doesn’t hurt that if you were casting a new James Bond, lead actor Dominic Cooper wouldn’t be a bad choice.  The mini-series co-stars Lara Pulver (Da Vinci’s Demons) as Ann O’Neill, “the love of his life” according to Fleming’s official bio.  No air date has been announced. 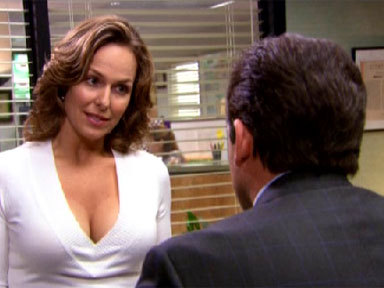 But still doesn't top Jan Levinson for me

Did anyone use to see My Wife and kids when it was running?

I found it pretty good.

Community just can’t catch a break.  Between ratings issues, public feuds, the firing of creator Dan Harmon, the abrupt departure of Chevy Chase, and the recent re-hiring of Harmon, the NBC comedy has been through the wringer.  Now, with the show’s mastermind back onboard as showrunner and a last minute reneweal from NBC for an upcoming fifth season, Community is being dealt another blow.

Vulture reports that star Donald Glover has struck a deal with NBC and Sony Pictures Television that will see him appearing in only five of the upcoming thirteen episodes so that he can focus on his music career as Childish Gambino. Whether Glover’s episodes will be spaced out or if he’ll depart early in the season is unknown.  Community will return for its fifth season sometime after the New Year during midseason.

The League of Extraordinary Gentlemen is getting another adaptation. Fox announced today that it has made a put pilot commitment for a drama series iteration of Alan Moore’s graphic novel series. “Put pilot” means that the network pays a penalty if the pilot for League never airs, so it’s nearly guaranteed that this thing will make it to airwaves.

The new TV show is officially described thusly: “A drama series based on Alan Moore’s critically and commercially successful graphic novel series about a group of Victorian-age literary characters, including Captain Nemo, the Invisible Man, and Dr. Jekyll and Mr. Hyde, who team up to fight a common enemy.” The source material was previously adapted by Fox for a live-action 2003 feature film starring Sean Connery.

Per TV Line, The League of Extraordinary Gentlemen already has a creative staff in place. Kings, Heroes, and The River showrunner Michael Green will serve as the writer/executive producer/showrunner on The League of Extraordinary Gentlemen, while Erwin Stoff (The Matrix) is also producing. There’s no word on whether the pilot would be ready for a fall bow or if the series is being prepped as a midseason replacement.

After I'm done catching-up with The Walking Dead and Game of Thrones, I'm intending on watching J.J. Abrams' Lost. So anyone, give me a reason that I'm making a wrong choice...

@El Gunner wrote:After I'm done catching-up with The Walking Dead and Game of Thrones, I'm intending on watching J.J. Abrams' Lost. So anyone, give me a reason that I'm making a wrong choice...

Page 7 of 40
Permissions in this forum:
You cannot reply to topics in this forum
Latest topics
» Newcastle United Watch - Jamal Khashoggi memorial edition

Yesterday at 9:42 pm by sportsczy

Yesterday at 9:28 pm by Clutch

Yesterday at 7:32 pm by Hapless_Hans

Yesterday at 6:41 pm by halamadrid2

Yesterday at 5:41 pm by Myesyats

Yesterday at 2:36 pm by Pedram

Yesterday at 2:34 pm by danyjr

Yesterday at 1:40 pm by VivaStPauli

Yesterday at 1:37 pm by Casciavit

Yesterday at 11:07 am by BarcaLearning