Came out in an article in Sports Illustrated, also on the cover of the upcoming issue

cba copy-pasting cause its a long article - historical moment though, for sure 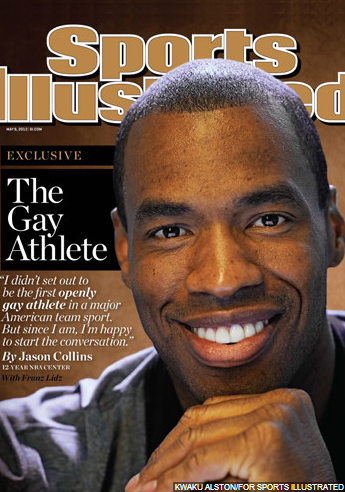 Indeed, props to him for having that courage.

Seen nothing but support so far for him too, which is very cool. I don't think it'd be the same in the NFL. From Kobe, Nash, Van Exel, Baron Davis, Kenneth Faried, Michael Strahan, tons of others.

edit: 15min after I type that I found out an NFL player(Mike Wallace) made a negative, and frankly ignorant, comment.

Great amount of courage to do this. Kudos to him. Might encourage other athletes who are afraid to come out as well.

Broussards' take(he said this on ESPN too):
"“If you’re openly living in unrepentant sin, whatever it may be, not just homosexuality, (but) adultery, fornication, premarital sex between heterosexuals … I believe that’s walking in open rebellion to God and to Jesus Christ,” Broussard said. “I would not characterize that person as a Christian, because I don’t think the Bible would characterize them as a Christian.”"

Mark Jackson:
"Jackson: “As a Christian man I have beliefs of what’s right and what’s wrong, that being said, I know Jason Collins, I know his family and I'll be praying for them"

Ah yes, nothing like the book of fairy tales to tell you what's right or wrong. I wonder, as African-Americans, what's their stance on Exodus 21:20 which basically says if a slaveowner beats a slave and he doesn't die within a couple days, the owner won't be punished because that's his property. Or do they just pick and choose which sections to follow?

Embarrassing for the NBA.

Picking and choosing which sections to follow is basically Christianity 101, I mean have you READ whats in the Old Testament?!

In any case, Broussard said that?!?


On the bright side, with the exception of the usual group of RWNJs etc, reaction that I've seen so far has been overwhelmingly positive

My main man Kobe got out in front of the whole story very early, which is great considering the pull he has in the league

Swanhends wrote:Picking and choosing which sections to follow is basically Christianity 101, I mean have you READ whats in the Old Testament?!

On the bright side, with the exception of the usual group of RWNJs etc, reaction that I've seen so far has been overwhelmingly positive

My main man Kobe got out in front of the whole story very early, which is great considering the pull he has in the league

No I haven't lol. But true, that's their MO.

Here's a good read with a lot of different positive reactions:
http://sportsillustrated.cnn.com/magazine/news/20130429/jason-collins-reveals-gay-nba-reaction/?sct=hp_t2_a2&eref=sihp

Huge respect for his show of courage in coming out like this. Its a bit sad that it's still such big news, but at least it's a step toward proper equality. Maybe Robbie Rogers will reconsider his decision to retire now... lord knows Chicago could use him at the moment.

Speak of the devil RedO, he's training with Galaxy.

I saw. It's all a bit disappointing, actually. He basically scoffed at the news that Chicago gained his MLS rights from Columbus and then announced his retirement saying he didn't believe his teammates would accept him once he came out... and now he's visiting with the Galaxy rather than, say, the Fire. Even though multiple players and the manager made statements following his announcement that the door was open to him if he wished to reconsider his choice or keep in touch with the game. Bit of a smack in the face to the Fire, honestly.

But this isn't the thread for that.