Coutinho MOTM for me. Sturridge

We pounded them. I can't believe Newcastle were this bad ffs.

I have been saying all season how shit we are

seeing is believing though i suppose.

Nishank wrote:NO JINX
Enrique is the best LB in the league.

He was when he played for us, good to see him on form again.

I think Baines is the best though.

Wonderful. Absolute Wonder. Here is why I am so happy:

-To win in St.James Park no matter how bad NUFC were is for me a certain achievement that can surmount our confidence further, in which is a meniscus of our confidence away. This pertains to winning in the fashion that we did within their wonderful stadium, to which we must be proud of.

-Winning within Luis Suarez not just 1-0 or 2-1, but 0-6. It somewhat brings my mind to ease to the possibilities in the absence of Luis Suarez, who unfortunately was the victim of the FA's harsh harsh wrath.

Jose Enrique stood our for me in the back. It was further impressive to see him do it v his home crowd and team to which he has actually struggled against when we played in St.James, let alone NUFC. His voracious energy and top class tracking back to his position is just astounding and shows what an athlete he is. If Vincente Del Bosque continues to ignore this man in place of Jordi freaking Alba, I will pop a nerve followed by severe depression. Johnson on the opposite flank continues his lethargic, lackadaisical and somewhat careless form. It might be fatigue or just poor work ethic yet he is sloppy in attack, lazy to retreat to his defensive position and offering little to supply the painfully average Stewart Downing. We need you back Glen. I don't want to hate you.

Lucas was immaculate in his position. Post injury he was suspect of marking man to man to man and being stuck on his man which isn't his role in the midfield. Now he has recovered his fitness and mental journey to peak in screening the opposition midfield and uncanny ability to read the opposition play, just like he did pre-ACL injury. Steven Gerrard. My my, this man is a maestro. I just doted upon the man throughout the game and thought of what it would be like to lose this leader of ours (don't get me started on Carra) as he was EVERYWHERE and actually made our team mates look better, play better and selflessly worked for the team.

Coutinho was the Man of the Match. I along with fellow Calcio fanatics have speculated for years on end that Cou IS meant to be a central player to which having being complimented by Sturridge, will unleash his potential to control the front-centre of the field and cause havoc there. Why? Similar to the argument for Stephan El-Shaarawy, both are ambidextrous, dribble with both feet which is why there are modest cries for both to be moved central. Should he now? Not necessarily as such young talents must ply trade in all areas before moving to their desire spot (BR does this very well) yet in the future, he must be at the heart of all things in a supporting role to our CF whether it may be Borini or Daniel Sturridge. He is raw in some aspects for being guilty of overpassing, holding the ball a little to long and dribbling into dangerous areas yet this doesn't bother me as it is the mark of a young talent, brimming with energy.

Speaking of energy, Coutinho was MOTM. But Danny Sturridge was my favourite player. What I love(d) about him today is his sheer energy, his frame mightily brimming with positive anxiety to make things happen, produce what he does best and score goals. I love how alert he is for breaking offside traps seamlessly as he has shown he is our best player to do that. His problem is that in tight spaces he is near world class, yet when presented with open choices, spaces, and one on one in the box, he tends to lose his composure. Is it lack of experience within the CF role? A player who prefers tight situations? I don't know but all I can say is Daniel Sturridge is defining the work-rate and desire to bring us back onto the top. I absolutely LOVE the fire within him. Rather have him over Carroll without any hesitation.

Aside from that we saw Jordi Hendo with a polar performance on some ends, made up by his wonderful brace, which brings joy to my heart in seeing his joy. Carra-Agger immaculate in the back nullifying Cisse's potent threat and Sissokho's runs.

Call it bias, but I celebrated most when Fabio Borini scored. I've wanted him to score for quite a while after him being unlucky with wrongful offside goals, his goals being poached by the opposition or Downing or just impressing yet not getting recognition for his general play. I watch training weekly and notice this boy trains the hardest along with Luis Suarez and Jose as you can see his inert desire to improve and recover from his hindrances. His finish was pure class. He is adept with both feet despite preferring his right and the outside foot curler to put it past the GK was beautiful. He has shown that his link-up play and horizantal passes to provide chances to the attackers is up there and on the rise. And doing it under a minute is a great sight. Genuinely happy for Fabio.

I have to say that NUFC were especially bad. What a wonderful squad they are blessed with, all to be brought down by the incompetent Pardew to which literally allowed us to destroy them by this margin. You can see it in the players that he has lost their confidence. Fans hate him and it brought me great sorry after Sturridge's gol in seeing his destroyed visage in letting his team and fans down. He must go.

Same Arq, celebrated most with Borini's goal. He's such a likable fella and it's nice to see some good fortune befall on him. Not for once have I doubted that he'll come good for us, unlike everyone on rawk. I can see him in the Higuain mold in the future.

Messiah "Aggerswagger" wrote:Same Arq, celebrated most with Borini's goal. He's such a likable fella and it's nice to see some good fortune befall on him. Not for once have I doubted that he'll come good for us, unlike everyone on rawk. I can see him in the Higuain mold in the future.

RAWK to be fair is very supportive of young Fabio despite the haters.

Its funny how he scored quite a useless gol yet it brought out such latent happiness in us. I was surprised at myself on how I got out of the couch and screamed out of passionate joy in seeing his goal. It made me miss his boss celebration!

Higuain? Good point as although I would place him more Morientes or Montella than Higuain in his playing style. I know what you mean though. His intelligence in the box and how he calculates his moves is just scary and it not only opens up space for others, but it compliments our attack and adds an element of unpredictability within the box. I am so happy for him

Oh yes, and would every one kind wish a Happy Birthday to our very own StevieG8 Who turns 22 this today!

One of our most loyal posters with excellent insight onto the game and a sense of leadership when the cards are down (ask Nishy Messiah and I), just like our captain. Enjoy yourself buddy, 22 is a good age. Believe me from experience

Unfortunately this isn't quite true, most of the casual fans and those who don't go to games on the internet do but a lot of those who go to games don't...

A lot have feed on his lies and keep going on about "Stability" and "Last Season".

And believe it will be better next years with less games and think we will be more lucky with injuries etc etc....

There's still a lot of fans who have his backing sadly.....

Although it is true he's lost the dressing room that is undeniable.

Arquitecto wrote:Oh yes, and would every one kind wish a Happy Birthday to our very own StevieG8 Who turns 22 this today!

One of our most loyal posters with excellent insight onto the game and a sense of leadership when the cards are down (ask Nishy Messiah and I), just like our captain. Enjoy yourself buddy, 22 is a good age. Believe me from experience

Thanks arq! This game was a great early birthday present

It's not all bad, Mole. At least you get a good Sissoko face-palm image from the match. 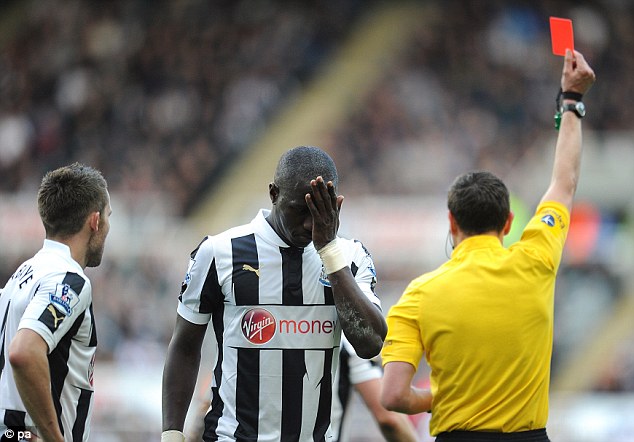 The game wasn't shown on TV. As I browsed the newspaper sites (Guardian, Mirror etc.) they gave the idea that Coutinho was a mere side show while the likes of Henderson, Sturridge and DOWNING were the kingpins. Gosh.

iftikhar wrote:The game wasn't shown on TV. As I browsed the newspaper sites (Guardian, Mirror etc.) they gave the idea that Coutinho was a mere side show while the likes of Henderson, Sturridge and DOWNING were the kingpins. Gosh.

Why mate didn't you see it in Star Sports?? It was shown there!

Couldn't watch the match due to drinking commitments, but that scoreline doesn't really leave you guessing how did the game go. The perfect time to get such an emphatic win - on the road, no less - after the whole Suarez nightmare.

Goals from players that we expect to be scoring, very happy especially for Henderson.

Get the *bleep* in. Hate Newcastle so this scoreline pleases me very much.

Coutinho will be key for us with Suarez out. He'll definitely be the one pulling the strings in the final third with his creativity. He had a lot of room against Newcastle, let's hope he can maintain this form.

Is it just me or does Sturridge paddle on the ball? And by paddle, I mean act very slow on the ball when he has time with it. He seems a lot better at shooting when he's being rushed into the shot / doesn't have to think what to do. Seems like he lacks composure for me. He had a chance to get his hattrick on two occasions last night but was very slow to shoot.

Also, does this game not remind you of a game watching Torres leading the line? I told you all majority of our players need someone like a Remy to replace Torres and instead we got Carroll. (I'm in the belief that Suarez has replaced Gerrard as the SS.) Who knows where we would have been if we just got a direct replacement for Torres. Sturridge's pace and movement opened up Newcastle which isn't very hard to do to be fair. Let's see how he does in his next four games... I'm still very skeptical on him if he's the one to lead us in the future.

Page 2 of 2
Permissions in this forum:
You cannot reply to topics in this forum
Latest topics
» Karim Benzema - BIG Ballon d'Or 2022 campaign

Today at 5:16 am by Robespierre

Yesterday at 9:54 am by Warrior