Alves is fed HGH after every game, but Barca aren't really supposed to report that.

Makes much more sense considering he never played (:
_________________
"People say football is life and death. I don't like that attitude. I can assure them it is much more important than that."

If his City performs well and wins trophies the English media are going to worship him. If City disappoints they're going to crucify him.

I found this article at the Barca forum

It's basically talking about Pep tactics, setup, etc with us and highlighting key things about his philosophy, here's what one of the members got

[…] Such expectations towards a manager was a rare sight. The 21 trophies in seven seasons already made him one of the greatest football manager in history. A miracle-maker, with its share of fantasies and misunderstanding. His Barca was a paragon of performance and aesthetic. However, even if his fans saw in Guardiola an artist, those who disliked or failed to understand Pep painted him as an ideologist, a slave to the tiki-taka; this boring succession of short passes that do not adjust to any kind of context, oppositions or objective. Like all kind of caricature: it is a mix of fiction and reality.

In fact his years in Bayern showed that Pep did not tried to replicate his Barcelona's success model. Under his command, the Bavarian team was versatile, and could adapt multiple tactical options within the same match […]

[…] Guardiola seeks to build the play from behind, in order to apply this play Pep relies on the numerical superiority theory. When a forward presses, the building of the play would require two central defenders. If two opponents press, then we will play with three etc.

This is the first step. But the core of Guardiola's thinking is to find the free man. It is impossible to comprehend Pep's football vision without understanding this concept.

What is a free man? It is a player that has enough space to move forward with the ball. Nothing really complicated here. But the catch is that everything imagined by Guardiola is centred around this obsession: to create free men, because a free man equals to a numerical superiority of one against zero. The absolute numerical superiority that must be created everywhere progressively as the ball is moved forward […]

The article is pretty long, but all in French not sure if the English version is around or if someone can translate (probably a lot to ask

"He is a genius. I'll say it again: a genius. Pep would tell you exactly how everything was going to happen in a match before it even happened.

"For example, the game against Real Madrid in 2010, when we won 5-0. Pep told us before the match, 'Today, you're going to play like the football is a ball of fire. It never stays at your feet. Not even a half second. If you do that, there will be no time for them to pressure us. We will win easily.'

"The funniest thing was if we came in at half-time and the game wasn't going well. Pep would sit down and rub his forehead. You know how he rubs his head? You've seen it, right? Like he's massaging his brain, searching for the genius to come to him.

"He would do this right in front of us in the dressing room. Then, like magic, it would come to him. Bang! 'We will do this, this and this, and then this is how we will score.' Then he would jump up and start barking out instructions, drawing maths and figures on the board.

"So we would go out, and we would do this, this and this. And that's how we would score. It was crazy. Pep was the first coach in my life who showed me how to play without the ball. And he wouldn't just demand that his players change their game, he would sit us down and show us why he wanted us to change with statistics and video.
_________________
"I pass and I move, I help you, I look for you, I stop, I raise my head, I look and, above all, I open up the pitch...The one who has the ball, is the master of the game...That's the school of Joan Vilà, of Albert Benaiges, of Johan Cruijff, of Pep Guardiola" - Xavi

The man is brilliant.

Arjen Robben: ‘You can discuss anything with Pep. At 3am he’s happy to talk’

“These days you have guys who are 19 or 20 and they’ve played their first game and they feel they’ve made it. It’s not true. There’s always so much to improve, no matter your age. That’s why I’m really enjoying working with Pep. I learn from him every day and that’s a special feeling. People always say young players can learn a lot and even at 26, 27 you can still make big steps. Then, it’s expected you stay at that level or go down.”

“When I started working with Pep 18 months ago I noticed how he goes much deeper into football,” Robben says. “His intelligence is obvious. Tactically he’s one of the best in the world and under him I have made more steps in my development. I’ve come quite a long way these 18 months.”

And, the Dutchman claims Pep is a fan of possession games in training… not that you could tell looking at his teams. He said: “He doesn’t normally get involved in 5-a-side matches with us – but he will join in possession games."

^ But is it down to Pep, though? Is he really the one behind this winning streak? City fans say it's Pep. Madrid fans said it was Z. I say it's Danilo. We have been in poor form ever since he was sold. City has been in God Mode every since they signed him. You call it a coincidence, I call it a miracle of life. Danilo is the chosen one. He doesn't even need to play to influence games. He brings luck and wins games from the bench.

I was thinking the same. Danilo sitting there and collecting honors after honors.
_________________
"I pass and I move, I help you, I look for you, I stop, I raise my head, I look and, above all, I open up the pitch...The one who has the ball, is the master of the game...That's the school of Joan Vilà, of Albert Benaiges, of Johan Cruijff, of Pep Guardiola" - Xavi

I was thinking the same. Danilo sitting there and collecting honors after honors. 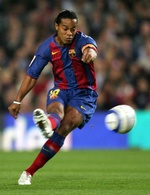 Guardiola: Barcelona, Bayern & Juventus are the best teams of the last decade

Pep is absolutely right. Winning the league takes much more than a few dubious decisions and helping hands from lady luck. It takes consistency throughout a season.
_________________

If it's so easy why has Madrid won like two la Liga in a decade lol.

Pep is right, you may not like it but when talking about success Madrid's utter failures in their own league is rightly held against them.

Winning the league and CL is significantly more difficult because you don't get to prioritise one and give up the other like Madrid has.

Not to mention it means you aren't even the best in your own league lol.

Right here in Black and White

Juve 7 league titles for a total of 7

Madrid 2 league titles and 4 CLs for a total of 6.

@Great Leader Sprucenuce wrote:If it's so easy why has Madrid won like two la Liga in a decade lol.

Pep is right, you may not like it but when talking about success Madrid's utter failures in their own league is rightly held against them.

Winning the league and CL is significantly more difficult because you don't get to prioritise one and give up the other like Madrid has.

Not to mention it means you aren't even the best in your own league lol.

Because Barca knows how to destroy Liga teams, they have Messi and we have motivational issues in Liga games.

also i said Bundesliga and Serie a. not Liga.

and can you answer me if winning CL is so easy why 3 of Barca, Juve and Bayern have won it only 4 times combined in last 10 years?

@Mamad wrote: you have an off day or make a mistake you are out.


That's actually wildly inaccurate because if Madrid makes a mistake they get bailed out by the referee.

Or Juve.  they are winning everything domestic yet their fans aren't satisfied because they haven't won CL lately.

Newcastle really are in a slump these days, aren’t they?

Today at 5:41 am by LeVersacci

Yesterday at 3:11 pm by Nishankly

Yesterday at 2:57 pm by Warrior