he clearly needs some time on the bench...bring Skrtel back to the team

Agger has been poor this month yet the scapegoating needs to cease.

Skrtel? Please he has been just as bad as Agger

Cannot wait for Kelly to come back and actually challenge this once excellent partnership. Carra deserves full praise for his efforts.

Agger is quite obviously out of form as even in the attacking sense (with his poor headers these days) shows a clue that his head isn't straight at the moment.

Kelly as the solution

dude hasn't played at cb in like three years, and essentially never for the first team.

dude hasn't played at cb in like three years, and essentially never for the first team.

I simply stated that hopefully Kelly can challenge the two for the CB spot since obviously the pair hasn't had their head straight this season. Usually a sign of complacency. Kelly has played CB numerous times for us and naturally is a CB.

Slipping? After this loss I quite certainly am.

Yes Agger has been woeful...........NOT. He has been far from woeful BUT i do agree that he needs to be benched without any questions. He makes only 1-2 mistakes a game and this month these mistakes have been costing us goals.

No. Skrtel was just as mistake prone, which is why he got benched in the first place. but now he's been a month away from the starting line up and hopefully he's come back to his senses. Bench Agger. Bring Skrtel in.

In which game(s) was Skrtel "mistake prone" after Lucas' return? I'd like to know please.

I can only think of Oldham - and that's harsh. He was playing ALONE in defence because of the performances of the other inexperienced players. 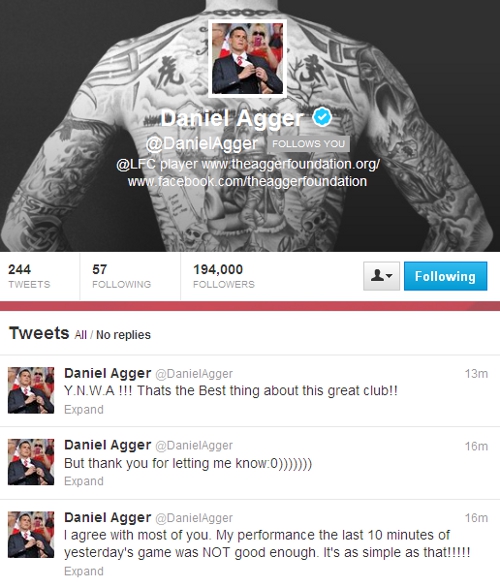 ynwa wrote:In which game(s) was Skrtel "mistake prone" after Lucas' return? I'd like to know please.

I can only think of Oldham - and that's harsh. He was playing ALONE in defence because of the performances of the other inexperienced players.

Since Lucas came back Skrtel's mistakes:

1. Aston Villa (second goal) - loses Benteke's run behind the defense. Then get's fooled by the back heel.
2. Aston Villa (third goal) - Backs off Benteke so much that he Benteke finds himself right outside our six yard box in a shooting position.
3. Stoke City (first goal) - slips right in front of Walters, who is then left one one with Reina
4. Stock City (3rd goal) - Loses the header inside the box to Jones who nods it to Walters who scores a wonder goal.
5. United, (Evra/Vidic goal). Gets caught out completely by Welbeck, then has to bring him down and cost us the free kick. Then for the freekick, outlandishly gets in the f*cking wall instead of marking someone in the box.
6. Oldham - Don't even have to explain.


Around the same amount of mistakes as Agger since the return of Lucas. He's had his time on the bench to ponder about his form. It's time to bring him back in and give Agger the same treatment.

Everyone makes mistakes. It would be a mistake to bench him imo.