i dont see aguero working very well on the wings.i will learn how to spell Aguero for future reference should def play as the ST imo

I'm not comfortable with Coentrao at right, but it seems to me that it's happening and I respect Mou to not take him on unless he was sure it will work. I'm still hoping it's gradual whereby Ramos still plays some at RB (we need him at RB on selecciones for another year to two).

However, I'm really excited with this potential line-up, 2 very agressive FB, strong at CB and of course goal, a midfield that although they don't yet have the team chemistry as Barca can also excel at passing and possession (plus every one of them have strong shots from midfield) and as strong a front line as any team. I think we don't have to alter line-up to play against barca if we have this line-up. (note - at this point both Neymar and Cazorla are just hopes for me).

i agreed that we dont have to make changes for barca and adjust the team to them. i still prefer we develop our own system instead of adjusting to them... i find that an obsession.
_________________

Guys, how about we play with 3 attackers?.
Ronaldo and benzema at the wings and Aguero at front perhaps?.
Özil feeding them ofc and Di Maria as a sub.

Yeh that would be best formation to fit our players. Higuain deserves to play and Benzema is equally as good and a bench role will just slow his momentum. Either Aguero or Benzema. 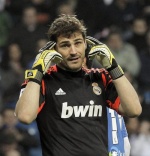 Here's the starting line-up for beginning of season. There will be plenty of rotations this year plus I'm assuming (for the moment) that both Neymar and Aguero will be here for this year (that's a big assumption on my part but let's go with it for the moment). We will know for sure within the next 3 weeks.

Now that is is pretty much assumed that Neymar is not coming for this year, I revise the starting line-up.

This leaves bench strength as Adan, Arbeloa, Varane, Albiol, Granero, Callejon and Altintop plus 5 of the above being in rotation.

and a possible carvalho still as our starter next season


could be our midfield if mou wouldnt use coentrao as a defender. he did great in the midfield against LA 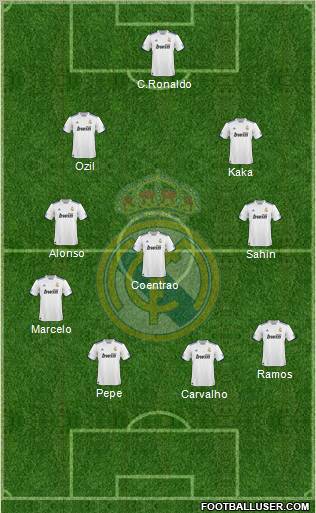 im not sure putting coentrao at the Dm role as well....

looks like he will be like lass and gago if ever. he will tend to leave the position most of the time. rather still use xabi at the DLP role. coentrao at CM will be good though
_________________

Coentrao is a great player has done fairly well in the midfield against mid-range to below average teams.

He tends to drift to the left far too much. Leaving a gap in the middle where hes supposed to be.

Since when have you guys ever seen any of our dm,cm all the way on the left wing dribbling the ball up?

I expect Coentrao to be a carillero, not a DM.

I think the line-up can be pretty well be predicted now.

Goal - Casilla, Adan getting starts in Copa games, Mejias from Castilla will get to dress if either is hurt.

Defense - Ramos, Pepe, Carvalho, Marcelo (Varane will get some starts, maybe even take over from Ricky as the season progresses, Arbeloa will see sub action at both RB and LB, Ramos will also get some CB play, Albiol will see very limited game action, Coentrao may replace Marcelo the odd time and Nacho is available from Castilla for either RB or LB).

Midfield - Khedira, Ozil, Alonso (Sahin will challenge for starts to both Khedira and Alonso and occasionally they will play him in centre in place of Ozil. Coentrao is playing a reserve joker role and most times he will be used in MF. Kaka may get some action in place of Ozil. And finally the other MF is Granero. He likely won't get any starts other than Copa games but will get sub action.

Wings - Di Maria, Ronaldo (Callejon as prime reserve). Coentrao, Kaka, Ozil and the 2 strikers will likely also get some action at wing.

Striker - debate here as to who starts Higuain or Benzema (then there is the possibility of a 3rd striker in reserve, or Morata on occasion from Castilla)

here is my current thoughts Alonso? I thought he was meh

@Ganso wrote:Alonso? I thought he was meh

better than granero and coentrao

I would like to see a different formation for Madrid. (I saw it in play yesterday with Spain's U20). They played a 4-4-2 system.

The midfield was a duel pivot and the outside were wingers. That way we can play CR7 with Benzema or Higgy, and have Di Maria, Callejon or Neymar or Ozil or Marcelo or Coentrao on wings and Alonso and Sahin / Khedira in the dual pivot.

Just talking about this gets me excited. I also think with 4 in MF, that can go a long ways towards conteracting Barca's midfield!!!!!!!!!!!!.

Page 4 of 6
Permissions in this forum:
You cannot reply to topics in this forum
Latest topics
» The Official Winter Transfer Rumours Thread