Our players are clearly stepping out of the boundaries of their position anyway. Ronaldo would have a free role just like under pellegrini, and Benzema clearly does a lot more than your traditional CF.

And it's not like the forwards will literaly mark the fullbacks, they still go up. you do not stop a great full bacl from attacking. If he does, the defense will adapt without him, and will cover him.

if your fullback overlaps, you still have a line of 3 in defense, the DM and the two CMs in support, it's not any different from a 433 or other formations.

You picked an awful example tbh.

extreme wing play would give troubles to any team if executed well.

I dont believe ronaldo and benz will track back enough playing as strikers,lets leave that at it.

My logic is pretty simple actually,if our forwards does not pressure wing backs we are literally out numbered in midfield,we can do nothing with a out numbered midfield.

Defending is different from 4-3-3 too,very different.In 4-3-3 wing backs are marked by wingers/inside forwards.Whome are there to mark in 4-3-1-2? none.Midfield can cover argument is flawed when we are out numbered in midfield.

I think your 4-3-1-2 believe is based on strong believe that our strikers will track back which i have no faith.

And no Villarreal vs Bayern was typical example of 4-3-1-2 getting owned by 4-2-3-1 with wing play.I found a nice little article about how the game was lost when garrido started with a 4-3-1-2 itself.


"One must question Garrido’s choice of formation. First, it offered the full-backs no protection from Bayern’s wingers. If Garrido had done his homework, he would have known that Bayern work their left-hand side a lot this season (in the Bundesliga so far, 42% of their passes are played down that side, compared to 29% each through the centre and down the right), and Mario Gaspar was always likely to be facing a tough task against Franck Ribery.

4-3-1-2 against 4-2-3-1, then, except the 4-3-1-2 didn’t manage to dominate possession, the clear area of advantage in this match-up (by virtue of the numbers game in the centre of midfield). How did Bayern keep the ball so well? First, their full-backs were often free, and second, Bastian Schweinsteiger and Tymoschuk worked hard to make themselves available in the middle of the pitch.

Villarreal did try and close the full-backs down by moving Giuseppe Rossi and Nilmar wide onto them, but Bayern were still able to retain possession because Villarreal sat deep, didn’t press, and usually the holding midfielders and centre-backs were in space. Rossi and Nilmar moving wide did stop the Bayern full-backs moving forward, however, so Villarreal weren’t as prone to the 2 v 1s down the flank as Roma when they went 4-3-1-2 against Bayern last year."

yh let's leave it at that, we conceptualize two different things.

Again, villarreal vs bayern is a terrible example, for few reasons: 1) not their natural formation, clueless about the new tactic, 2) no playmaker so even on the ball they were poor, 3)villarreal game is all about the unit, which was broken by key absences, so clearly the quality of individuals cant match Bayern, 4) you said it yourself, they sat deep and didnt pree, what else to expect? they got swarmed.

Adit, 4-3-1-2 is a lot more complicated/flexible than you think

Some wrong points in your version:
1. When the strikers aren't marking fullbacks, they're in midfield! 4-3-1-2 doesn't use targetmen or poachers if you want to use it right .The two strikers are fast attackers (someone like Muller, Pedro or Klose) .
When attacking only one of them goes wide

Count your numbers in midfield again then

2. The formation isn't fixed. The three mids in the middle go wide,up or back or interchange places

It's one of the most complex formations

All depends on your opponent

3. If you have a monster fullback in Marcelo, they have their problem marking him as well

That was my plan aswell in the old forums. I'd like us to try it out at some point

fantasy formations. here is my latest:

About 4-3-1-2, the thing about that formation is that u need to have fast wide CM's, you guys saw how we crushed milan last year when we played super fast counter attacks against them.

But it will have a strong center midfeild defence/attack, which is its only advantage.

2 year's ago i wanted a formation like this when ronaldo was injured:

It was one hellova of a counter attacking formation. but we strugled against parked bus teams.

nope i dont believe our strikers are good at track backing,and nope ,strikers will not be able to drop to midfield every time,thats just wrong.CR and Benz will barely track back,both lacks work rate,mentality and intelligent defending,cant see them pressuring any midfield.They will be there with the opposition CBs.

As i said in every posts,4-3-1-2 only works if you have good tactically disciplined strikers who provides good work rate and great tracking back.
The day before yesterday Rossi and Nilmar failed to pressure the fullbacks even though they did tried to trackback.Are ronaldo and Benz better than them at tracking back? Nope.

If they are not tracking back,easily we got out numbered in midfield.Then comes a 2 vs 1 situation on the flanks,then we are dead.

I cant think how 4-3-1-2 can defend with out having super work rate strikers who are always willing to track back.

why mark people who do not have the ball on 1v1 and close?

if the ball switches wings, the defense slide to whichever direction it goes.

Thats what about it,simply got out numbered when strikers are not tracking back.Every counters with opposition full backs going up is a danger.Defense cant slide like a bar you know.playing a 4-3-1-2 with not track backing strikers means good bye to possession and match control.

didn't really know where to ask this, but when will sahin play?

@lenear1030 wrote:didn't really know where to ask this, but when will sahin play? 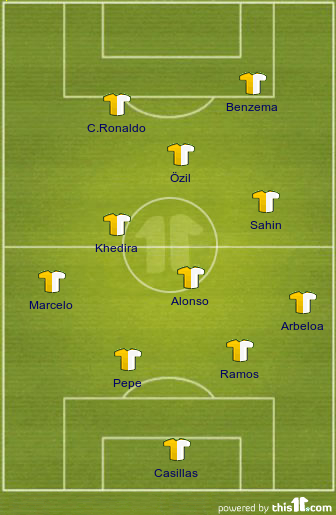 you know who is that

Players out for upcoming must win games.

Xabi is going to be killed,he's already played 3600 minutes this season

, and we have a slew of tough games.

Personally I wouldn't drop Benzema....I mean the other option is Kaka....so yea...

i think pepe is out too.

for his remarks after the match.

Page 6 of 6
Permissions in this forum:
You cannot reply to topics in this forum
Latest topics
» The Official Summer Transfer Rumours Thread