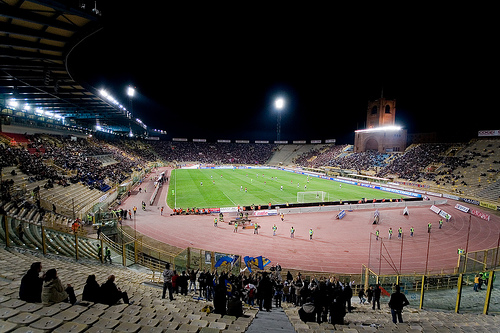 Liverpool will aim to secure qualification for the Europa League knockout stage against Udinese on Wednesday.
The Reds travel to Italy knowing a win will see them through to the final 32 of the tournament.
However, Udinese recorded a dramatic 3-2 win at Anfield earlier in the competition.

Team news-
Lucas is back, No idea if he will feature.
Kelly and Borini are long term concerns.
Suarez will start, If he doesn't it will be stupid.


Have to win this, Got a bad feeling about this match. Expecting Rodgers to put out a strong side. Also expecting YBSC to defeat Anzhi.

Interesting thing, both group matches will start at the same time so no other option except win and me too having a feeling that YSBC will win against Anzhi.

but I hope Anzhi at least draw against YSBC.

Udinese form: DDLLW Liverpool form: WDDLW , don't know how much it will matter. I am expecting a narrow win for Liverpool.
Also,I think, if we play more and more games in this competition, it will be a much needed financial reward although small. Now so used to see Liverpool playing on the thu night, do not wanna miss them later

I hope we qualify

Lucas, Gerrard and Agger have been left in Liverpool ......but otherwise all the rest of the starters have travelled. And yes Suarez will start.

It will be interesting to see the line-up for this match. Suarez will obviously start, but just about everything else is questionable.

For instance
- Will Enrique play LB or LW? Honestly, this is more of a question of who Rodgers trusts more: Assaidi or Downing. If Downing Starts, Enrique will be LW. If Assaidi starts, Enrique will be LB. Given the importance of the match, I'd vote for Enrique at LB and Assaidi at LW. Downing is defensively poor, and could get turned inside out by Udinese's Wingback. The positive here is that they tend to play with a 3-5-2, meaning there is typically only a single wide player to deal with.

- Does Sterling Start? I think the answer almost has to be: yes. The only other option would be to play Suso opposite Assaidi/Enrique. WHile, Suso has had some good performances, he's not been terribly influential from the RW. I'm not sure I'd put him in there from the start. Then again... can Raheem take another Thursday-Sunday turnaround? Perhaps this is Suso's chance to really assert himself.

- Who starts in midfield? Gerrard and Lucas are out. So, two of the three slots are wide open, and Allen could probably use the day off. You have to figure Sahin gets the start due to his ommision from P{rem League play recently. The other two spots are wide open. I honestly think Allen will start (how long he lasts is dependent on the match). Therefore, I think we may see Henderson and Sahin in front of Allen (resting Shelvey for a false9 role this weekend). If Allen doesn't start we may see Sahin and Henderson behind Suso or Shelvey. This one is a toss-up and could change depending on Rodgers's mood when he's writing out the teamsheet.

- Is it 3 at the back or 4? Does one 3-at-the-back system warrant another? Moreover, does Dinatale and whoever they pair him with warrant an extra CB. OR, are we so lacking in confidence in Downing/Assaidi that we remove them from the occasion. We may see a Carragher-Coates-Skrtel defense...

Udinese have improved their form in Serie A having started the season badly. They have lost just once in the last 8 matches there and are 3 - 3 - 1 at home. We need to be on top of our game if we want the three points.

Udinese will field a bunch of unknown players. Italian teams don't care about EL even when they have a chance of progressing let alone when they are already out and are playing for zip.

That is to be hoped.

If Di Natale is not starting this is fantastic news. He is their creator (along with Fabbrini) and scorer of their goals as the rest are just too inexperienced or just unmotivated since they are knocked out. I don't know Udinese's line-up but being Guidolin I wouldn't be surprised if he fielded a weak team again just like he has throughout the EL. Udinese is far worse than Art's statistical data as it almost flatters them.

I have some qualms over this line-up. I would have started Jones who will get very little chances now as forget deserving to start over Pepe, why wouldn't BR use Jones today?

We use Carragher....once again despite being pathetic this season. Its almost as if BR fears Carragher as starting Coates would be a far more proactive idea. Remember how Carra was embarrassed vs Udinese at Anfield?

I don't see how Sahin, Allen and Henderson will cope given Hendo and Allen are possession recyclers are the moment while Sahin's lack of confidence also has made him into the role of "keeping it simple and tidy" How on earth will we create chances from this unbalanced midfield? It seems Allen will have to play CDM again which is bad news. Hendo is a box to box in theory but is too reserved for that now.

Starting Downing is just pointless however you put it in any spectrum. Assaidi continues to get ostracised much to my chagrin as I'm sure you share my sentiment. If he doesn't start next game then I have no idea what to say. Good to see Suarez starting as a goal will relieve pressure from his slight goal drought in the past three games.


I'm going to follow Art's passionate method and agree that this is a MUST win. No excuses for failing this one. Udinese fans as I hear will be barren in the stadium which allows our away fans to be heard even more.

F**king Brilliant. Sahin forced off because his nose is bleeding profusely. Quite obvious these UEFA/FIFA rules are an absolute joke. Pisses me off when a player is sidelined after the slightest dollop on his face. Shelvey on form him followed by a typical brainless volley wasting a chance.

We're in for a boring match here.

suarez to suso, suso to hendo and goooooooooal yeeeeeeeeh

HMR, join us in the Europa League thread in the general section. This thread is empty now.

I'm feeling too lethargic to write a full post match analysis but will reserve a mention for Skrtel who is a damn warrior in the back and was my MOTM by a mile. He has shown how well he can cope without Agger.

hell we won but GOD what a boring match it is!!!!.......its just like they were told not to move the ball forward in the closing hour.....pls pls pls give away downing to any club that's interested for free............it's time they all learn the importance of many goals not just one then park the bus,its frustrating

Top of the group as well. Excellent.

BR taking matters in his own hands. . . LITERALLY!

Fahim89 wrote:BR taking matters in his own hands. . . LITERALLY!

I was waiting that someone would come up with that, fahim

and determined liverpool, topping the group

A typical day for LFC at the office with the opposition GK putting in Superman Performance, Referees going crazy, hitting the post/bar & any fan near the Goal post

At this rate as I'm looking at other groups. It seems as though it would have in our best interest to finish second. We can face much stronger opposition as the group winner than we could have as the second placed team.

Only three teams that I could feel comfortable of beating. Sparta Prague, Basel/Videoton, and BATE. And even here BATE are really scary, they've beaten Bayern Munich 3-1 at home in the CL already and Lille away 1-3. They are no pushover team. Really hoping for Sparta or Videoton(if they make it).

Also Messiah we have another thread for that