I know some have talked about this before so why not make a thread on it....

Be it shooters, sports games or what ever tell your stories of post match hilarities and how you dealt with it.

My most recent story was from last night.

I beat this guy and his team despite having my team mainly filled with bots 2 rounds to 0 and both rounds were very comfortable and i was met with this voice message.....

"Surprise surprise you c*nt you have no skill i hope you get f*cking cancer."

The irony behind all of this is i was running round with a shotgun all game with 3 bots on my team so i was practically at a 3 man disadvantage while the majority of this team was using Retro Lancers.

To explain it to people who have not played Gears 3..... a shotgun up against a Retro Lancer is like a Stakeout up against a AK74u on Black Ops..... so who is the one with no skill....

I then sent him a reply " Haha no skill? says the Retro *bleep*? gg brah" he then responded telling me to get a life

When I was 7 years old, I destroyed a 17 year old at a game of Street Fighter at an arcade. He told me to go feck myself

Someone told me "Im an pig" quite recently on PSN.

This is about game's lol if i wanted to make a thread about sports in real life and bring up stories i have i would have.

Poor trolling Vibe, i can see why your 25%

I'm 25% because I'm not a domesticated troll

Damn if only this thread had happened a bit earlier. Every gaming session I've ever had ends in a straight up banter/argument session.

Or back when I played COD and people had microphones, so easy to wind them up

dont know if this counts but


more recently on bf3 i was camping and when suddenly an enemy appears in front of me out of nowhere i had a snider and im bad at quick scope so i swaped, not to handgun accidently but to bazooka
so i fired! and boom he dies as i aim accurately..
5-6 seconds later he comments and says: NOOB you kill me with rocket, you cant kill me with normal gun, ASSHOLEE

or in fifa 12 h2h game i played against a very good player and i was losing 3-0. 20 minutes to go and my computer was overheated so the game started to lag, was taking 1 minute until a pass was completed or somethingm, i had no time, had to go so i left the computer open instead of just turning it off since i would be back in some hours.
when i come back he had left, i took the 3 points
and while im about to close origin i see a friend request.. guess what? it was him, but i realized it after i accepted the request,
he started insulting me in every possible way

aaaand i deleted him

and a last one, couple of years back i was playing s4 league ( online mmo fighting style in rooms )

clan battle 3 vs 3
and both of my teammates and friends got disconnected ( once you get disconnected you cant reconnect)
so i was alone
who ever wins 10 rounds first wins the battle, me alone they were 3 and i won 10-9

after the game all 3 of them left their clan immediately to join the one i was in,
sad thing is the clan leader didnt accept them 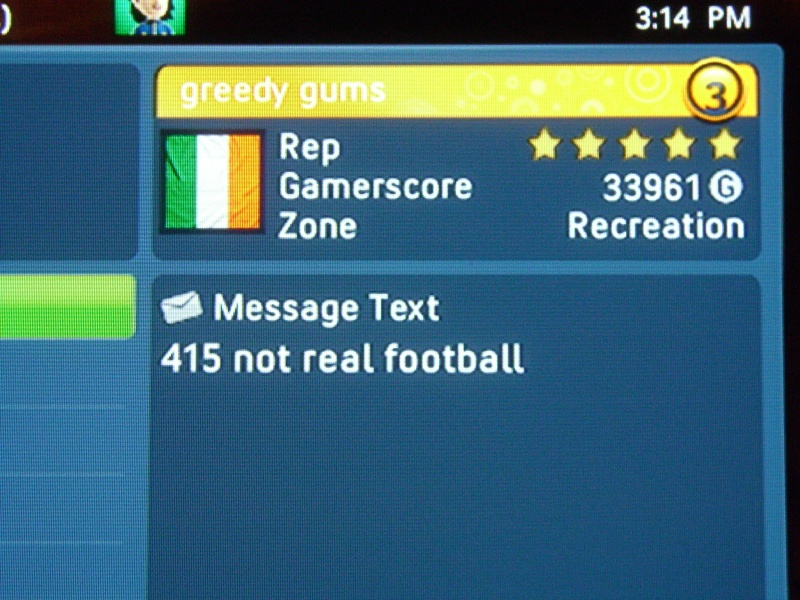 One reason I hate Xbox live party chat...there seems to be way less trash talk in shooting games. My goodness, back in the days of "Gears of War 1", I was know for my trash talk and I think it made the game more interesting. One you open that mouth, it's all on your and your team to back it up.

These days I'm a little too grown to send messages back and fourth. I tend to only send out messages like, "Good game" or "Unlucky". Haven't played many online seasons with Fifa 13, but I'll try to keep this thread updated if I receive any rage-messages.

I'm a pretty big troll on FIFA these days...especially to Madrid fan boys who imo are the scums of the Earth. I take the lead, play alot of passes between my defenders and then sent a wink or a smiley to the opponent after they've quit or the game's finished

Amar wrote:I'm a pretty big troll on FIFA these days...especially to Madrid fan boys who imo are the scums of the Earth. I take the lead, play alot of passes between my defenders and then sent a wink or a smiley to the opponent after they've quit or the game's finished

That's not trolling, that's called being a pussy..

Call it what you want, but these fanboys have ruined Seasons with the same bullshit tactics which are unstoppable. If anybody deserves it, its these cnts.

And the pairing system itself seems to be flawed. I was Everton/Newcastle and I still kept on getting paired up with Madrid...what kind of bs is that

So i was playing some clubs with my boy from Trinidad and I end up scoring a beauty in the first 5 minutes (I fanned past two defenders and ended up nutmegging the next defender before scoring). It was no surprise when they quit a few moments later. We end up getting paired against the same team and make sure to not score before the 5th minute. Shortly after the 5 minute mark, my boy is on the attack and running down the left wing. My created pro is making a brilliant run down the center and he find me with a great cross that I volley into the near post.

Unfortunately that ended up being our only goal. Although we did come away with the 1-0 victory, it would have been nice to put on more of a show. I decide to invite them into our party and I was able to talk some shit for the first time in years. I can't remember exactly what was said, but I remained cool, calm and collected. They tried to say our first goal from the first game was lucky and that we got lucky in the second game as well (they were clearly hurt).

These days it's really hard to catch people on the microphone and I find that takes away some of the fun. Taking trash leads to better competition in my opinion. I also feel like more in on the line once I talk, you must back up your trash talk! I hope to share more funny stories on this thread, but I'm not promising anything.

Amar wrote:Call it what you want, but these fanboys have ruined Seasons with the same bullshit tactics which are unstoppable. If anybody deserves it, its these cnts.

And the pairing system itself seems to be flawed. I was Everton/Newcastle and I still kept on getting paired up with Madrid...what kind of bs is that

What tactics are unstoppable??

I have never played a less than 5 star team with Madrid..

Today at 2:47 pm by Robespierre

Today at 2:00 pm by Robespierre

Yesterday at 4:30 pm by Thimmy

Yesterday at 11:04 am by titosantill